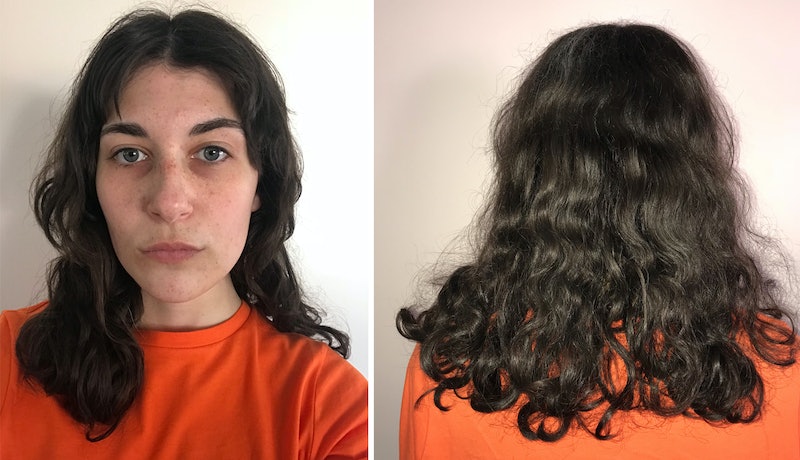 For some, the act of washing hair is a soothing ritual. For others, it's more of a chore. A few of the people who fall into the latter category have decided to embark on a movement that may sound a little unpleasant to some, but apparently works. So what is the No Poo method, as it is commonly known, and what really happens to your hair when you stop washing it for two weeks? I tried it to find out, and it didn't go as I expected.

It's unclear when the No Poo method, as it's commonly known, began but it has been adopted by a number of wellness bloggers over the past few years. It simply involves throwing away all of your shampoo and conditioner and washing your hair with either just water or a combination of natural products.

Why would people bother to do this? According to the official No Poo site, it's because people believe that the harsh chemicals often included in commercial haircare products strip hair of its natural oils or sebum, resulting in a process that actually makes hair greasier, encouraging you to wash your hair more frequently.

However, there isn't actually any scientific proof to back up this sneaky sales tactic claim. Dr. Nicole Rogers, assistant clinical professor of dermatology at Tulane University, told Health: "For the average person with healthy, untreated hair, there is no evidence that the simple act of shampooing, so long as it is with the appropriate ingredients for your hair, will cause damage."

Dr. Rogers adds that contrary to No Poo advocates' claims that shampoo triggers excess sebum production, this production is actually "affected by various things including hormones, diet, and genetics. The simple act of not washing your hair less is not going to slow it down."

While it's clear that there isn't really any science to prove the No Poo method works, you're still likely to come across stories of people who have stopped using shampoo and loved it. In June, Metro published the story of a woman who had been washing her hair with water for two months and was so impressed that she was persuading her friends to try it. Blogger Lucy Aitken Read hasn't used shampoo in years and even wrote a book explaining how and why you should do the same.

Of course, you can't believe everything you read. So I chucked out the last remaining dregs of my shampoo and conditioner (so I wouldn't cheat) and prepared for a fortnight of horrendous hair.

Seeing as I have insanely thick hair, I only wash my hair a couple of times a week anyway so I didn't expect this experiment to affect me as much as someone who washes their locks every single day. But I was worried about looking like a greasy mess — especially when No Poo champions say it can take a couple of weeks for your hair to adjust.

Rather than opting for shampoo alternatives like apple cider vinegar or baking soda, I decided to stick to plain old water. Washing my hair without shampoo for the very first time was a strange experience. I automatically reached for the bottle even though I knew it was lying at the bottom of the bin.

I let my hair dry naturally overnight (because I can't be dealing with the heat of a hairdryer or the frizz that it leaves me with in these temperatures), fully expecting it to feel wet from grease the next morning. After running my hands through it, I was pretty surprised to find that it felt the same as it always did after a wash.

Two days later, however, it was a different story. My fringe, which is currently in its awkward growing out stage, felt so greasy that I was embarrassed to leave the house. While the rest of my hair didn't feel too bad, I couldn't wait to get back in that shower.

My second No Poo experience was a lot easier than the first. In fact, it meant I didn't have to set aside a significant amount of time to wash my hair and could effectively do it when I pleased. After it had taken its usual 12 hours to dry (yes, really), I ran my hands through it once again and asked my sister for her opinion on what it really looked like.

Again, it felt fine at first and my sister agreed that it looked perfectly fine. But after a day, I could feel the itchiness that comes with having greasy hair start to kick in. Weirdly though, my hair didn't look greasy. Instead, it felt quite dry and had plenty of those pesky white flakes from where I couldn't resist scratching my head.

Onwards and upwards, I thought. If I'd managed to ditch the shampoo for one week, surely another couldn't be that hard. Luckily, I was right. By now, I was in and out of the shower in a few minutes, leaving my hair to air dry and waiting with anticipation to see the results.

The third time, it began to look pretty good. It seemed to style better, was less frizzy overall, and my fringe wasn't getting greasy within 24 hours. I could probably get used to this (and to the money I'd save from not buying shampoo every two weeks).

My final time rinsing my hair with just water proved to be exactly the same. I'd learned to wait at least two days before passing judgement but was impressed at how my curls seemed to fall perfectly without the need for serum and how shiny my hair appeared in photos as well as in real life.

While I could easily have given up after the first horrible week, seeing this experiment through for another seven days proved to be a godsend. I'm not sure if I'll continue using no shampoo every time I wash my hair but am thinking of using it only once a week on my roots.

If you'd like to try it out for yourself, there are a few things you should know. Those with a normal scalp will apparently do better using just water while those who have oilier skin may want to try washing their hair with baking soda diluted with water and condition with similarly diluted apple cider vinegar.

You may also want to attempt co-washing which is where you banish shampoo from your life and only wash the ends of your hair with conditioner.

Whether you're worried about the harmful effects of chemicals on your hair or are fed up with how lackluster it feels and looks, there's no guarantee that trying something like the No Poo method will help. But it can't hurt either.