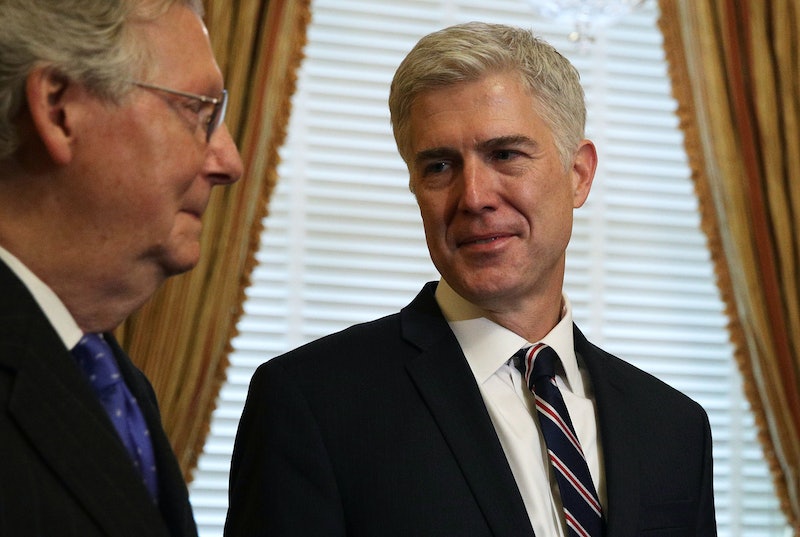 News broke on Monday that Senate Democrats had reached the necessary vote count to launch a filibuster of Neil Gorsuch's confirmation as the Supreme Court's new justice. Republicans, determined to confirm the judge anyway, suggested that they could end up having to implement the "nuclear option."

This move would allow Gorsuch to be confirmed with a simple majority of 51 votes rather than with the supermajority of 60 votes required for Supreme Court justices. This decision would make the road to confirmation much smoother for future Supreme Court nominees.

Several Republicans, including Sen. Orrin Hatch of Utah and Sen. Lindsey Graham of South Carolina, spoke in favor of invoking the nuclear option, though they both insisted it was not something they would prefer to do. "We have no other choice [but to go nuclear]," Graham said to reporters. "We’re not going to have a tradition of the Senate where they get their judges and President Trump can’t get his." He said he predicted a floor vote would take place at the end of the week and added, "It’s sad, but we are where we are."

Sen. Ted Cruz said that a Democratic filibuster of Gorsuch showed that the left would filibuster "any nominee a Republican president," and added that he believed President Trump's nominee would be confirmed by the end of the week.

A minority of Democrats feared the consequences a filibuster might spark, specifically the invoking of the nuclear option. "This is now about the future of the Senate, and Supreme Court," tweeted Hawaii Senator Brian Schatz. "They should consider taking a few weeks before pressing the nuclear button. This will mean nominees for SCOTUS won't have to meet with minority party to be confirmed. Remember: door swings both ways in Washington. The Senate is supposed to be (sometimes maddeningly) slow. Preserving that tradition is what allows the center to hold. Republicans: please take a few weeks before you change the Senate forever. I believe you will regret going nuclear."

Sen. Harry Schumer also insisted that going nuclear was the wrong choice to make. "When a nominee doesn't get 60 votes, you shouldn't change the rules — you should change the nominee."

House Majority Leader Mitch McConnell all but promised to go nuclear last Tuesday, when he guaranteed that Gorsuch would be confirmed on April 7. Though he didn't explicitly respond to questions on whether this meant he would implement the nuclear option, the implication was that all Democrats could control was what the process would look like. "We’re going to get Judge Gorsuch confirmed," McConnell said. "It'll really be up to [Democrats] how the process to confirm Judge Gorsuch moves forward."

With neither side showing signs of backing down, this is sure to be a tense battle.