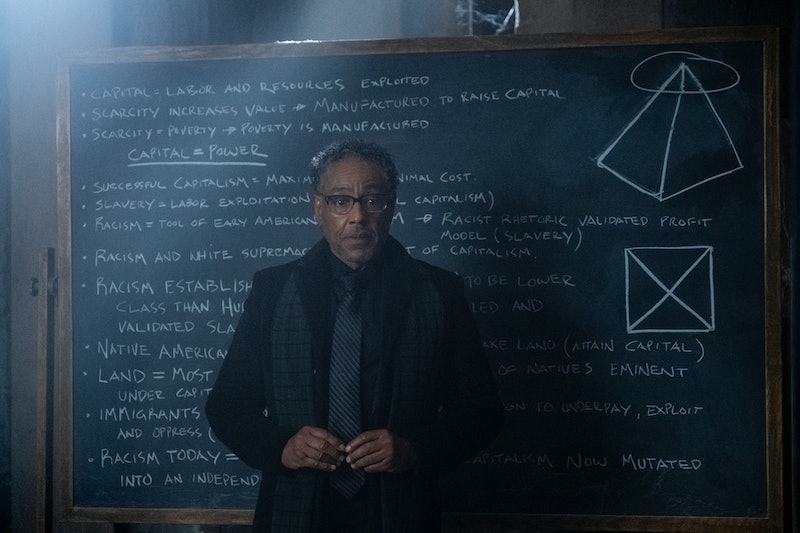 Spoilers for Dear White People Season 3. Dear White People always manages to weave together several separate stories from Sam, Reggie, Joelle, Lionel, Kelsey, Coco, Troy, and other character’s lives together in one big bundle. However, when it comes to the mysterious organization known as The Order, most of the characters aren’t aware of this massive secret existing right under their noses. This season, Sam and Lionel finally started to crack the code and understand what’s going on with The Order — and they are not the only student in the know. So, what is The Order on Dear White People? The answer is sort of complicated.

In Season 3, Sam and Lionel realize that Moses Brown, a charismatic Winchester graduate and who has recently returned as a professor, is a part of The Order - a secret on-campus organization that Lionel discovered last season. Moses seems like the Black students' savior but he sexually assaults Muffy, who refuses to come forward after members of The Order threaten her future. Meanwhile, Dean Fairbanks casually reveals the narrator from the tower's true identity, Dr. Edward Ruskin, to Lionel and gives his son an off-screen lesson about The Order prior to Troy's new magazine Fried Chicanery debuting a piece about college professors abusing their power.

Sam and Lionel make their way to Dr. Ruskin’s house, who explains that one faction of The Order is obsessed with maintaining status and wealth and will do anything to keep it, including sweeping Moses' multiple assaults under the rug.

So, the Order is basically an organization established to better society, particularly for Black people, but it lost its way due to greed, power, corruption, and apparently misogyny.

It looks at the pyramid structure of race, social class, capitalism, and power from a god-like overview, which makes it all look like one big X, hence the name. Ruskin says he is among a small group who is still fighting for what is right, reveals several pictures of members, whom the audience cannot see, and tells them to "kill the narrator” by forgetting this organization exists and listening to their own voices. But, Troy approaches them in the finale's final moments and says they have to talk, which means the investigation into this society is far from over.

Once again, Dear White People’s finale left fans with more questions that answers. Is Dean Fairbanks a part of this powerful faction or does he simply know a lot and choose to stay quiet? He said he was proud of Troy for bringing the truth to light, so he may be a decent Order member. And, it will be interesting to see what he told Troy and how much of it is actually true.

Who were the people in those photos on Dr. Ruskin’s wall? Sam was surprised to see one woman on the wall, so perhaps it is Rikki Carter or Sam’s idol Cynthia Fray. It also wouldn’t be surprising if several celebrities are a part of the Order of X as well. Where, exactly, are the other “good” members of the Order of X? Is Dr. Ruskin lying to Sam and Lionel? Season 4 cannot come soon enough.

More like this
Nicola Coughlan Shared A Lady Whistledown Excerpt From ‘Bridgerton’ Season 3
By Grace Wehniainen, Alyssa Lapid and Sam Ramsden
Everything To Know About 'The Midnight Club' Season 2
By Kadin Burnett
Shonda Rhimes' Net Worth Makes Her One Of The Wealthiest People In TV History
By Hugh McIntyre
'Firefly Lane' Season 2 Will Be The Show's Last — But There's A Twist
By K.W. Colyard and Grace Wehniainen
Get Even More From Bustle — Sign Up For The Newsletter