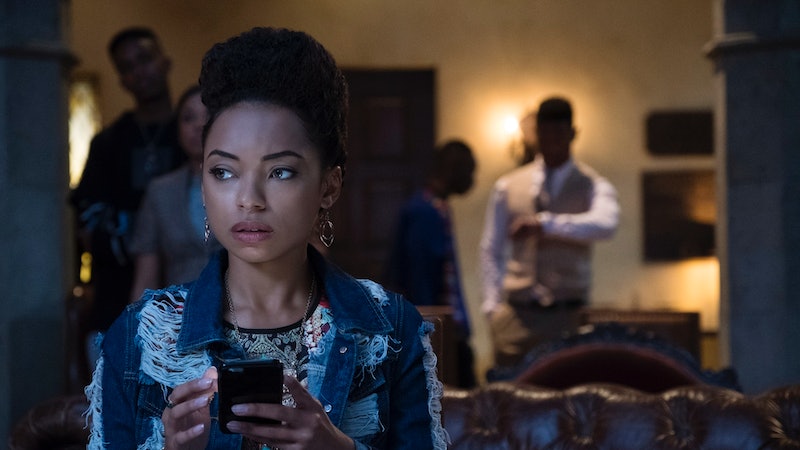 Dear White People is coming back — and it's officially going to be more meta than ever. On Friday, July 19, Netflix released the trailer for Season 3 of Dear White People which promises that the newest episodes of the show will, in the words of Joelle (Ashley Blaine Ferguson), have the "same title, new spin."

The biggest difference fans will notice from the start of the clip is that Samantha White (Logan Browning), the notoriously controversial campus radio host has stepped down from the show's titular program and "checked out." Hosting duties have now been passed on to Joelle, who is dating Reggie (Marque Richardson) and promising her listeners that she will interview people who are experts on the Supreme Court "and those who think it's a Diana Ross challenge on Drag Race."

Of course, in true Dear White People fashion, that's far from the only pop culture reference that the characters make in the trailer; in fact, the characters almost immediately point out the tropes of a well-established television show, with Al (Jemar Michaels) exclaiming, "Is this some Black Mirror sh*t? Everybody is acting so different from the traits they previously established!"

"People still care, but people change," Reggie responds. "If everyone stayed exactly the same, life would be tedious and predictable like the third season of a Netflix show."

In addition to some very meta dialogue, Dear White People will continue to poke fun at pop culture and TV tropes in general by introducing a parody of their fellow Netflix series, Queer Eye. The makeover show — titled US of Gays — will replace Dear White People's long-running parody of Love & Hip-Hop, while also apparently poking fun at the alt-right.

Of course, Season 3 won't just be in-jokes and pop culture parodies; based on the trailer, the show's new episodes will delve even deeper into Winchester's secret society, The Order. In the Season 2 finale, the series' narrator (voiced by Giancarlo Esposito) introduced himself as not just a disembodied voice, but as a flesh-and-blood character who runs the college's secretive club and recruits Sam and Lionel (DeRon Hurton). "The Order is more powerful than you will ever know," Esposito's character says after a mysterious interruption in the middle of the trailer.

"You must kill The Narrator," he tells Sam at one point — although it's unclear whether he is encouraging her to take a dark turn or just to listen to her own voice over the voice of others. Either way, Sam's involvement in The Order promises to bring even more mysteries and plot twists in Season 3 — even if Lionel isn't particularly thrilled with the "Scooby Doo mysteries" he's found himself in.

"From the movie, the spirit of, 'It's not what you think it is,' has always been pervasive in the world of Dear White People," the show's creator, Justin Simien told Bustle about introducing the narrator as a real character at the end of Season 2. "Having a narrator in the TV show is one of those conventions that a lot of people do, but I just wanted to take it to another level. I wanted it to have a narrative purpose and sophistication that was above and beyond someone just telling us things that we need to know."

Based on the Season 3 trailer — and Simien's desire to perpetually keep fans on their toes by upending TV tropes — it seems as there are plenty of twists and turns for fans to discover when Dear White People returns to Netflix on August 2. Same title, new vibe indeed.