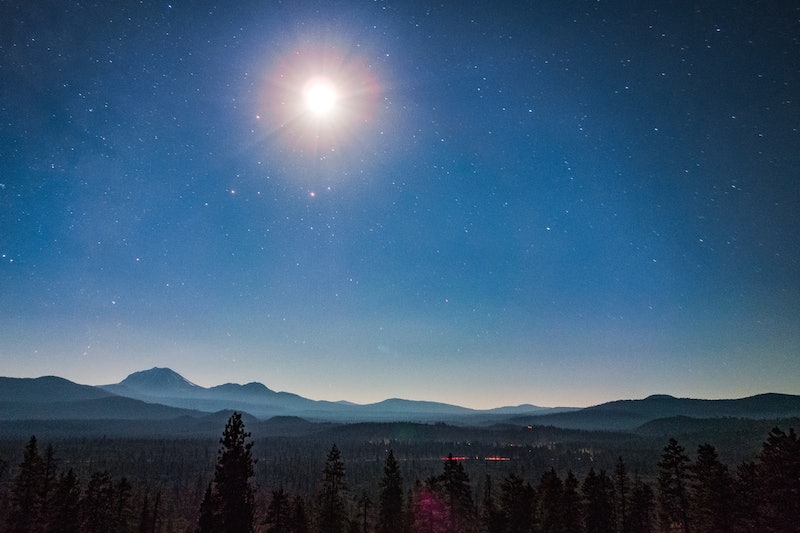 One night each year in April, the moon turns millennial pink. True story. So, what is April's Pink Moon? If you think this pale pink sphere is going to rise in the sky on Apr. 11 just for you, you're right. The Pink Moon signals a time for everyone — plants, animals in hibernation, and the tired human spirit — to reawaken after a long cold winter. The moon gets its name from ground phlox — one of the first spring flowers that sprouts a mossy pink bloom.

The Pink Moon also dictates the beginning of the Jewish Passover, and the Hindu Hanuman festival. In Arabic-speaking Islamic traditions, the night of the full moon is called badr, for full, but the root of the word also has connotations of health and beauty, according to Space.com. Additionally, April was known by the Old English name ēastre-monaþ, or "Easter month" by Christians in England.

If you're wondering why full moons have different names, the answer lies in basic survival tactics. Lunar cycles were named by Native Americans, who used the moon to track seasons so they would know when to plant, and when to harvest, during different times of the year. Many tribes kept track of time by observing the seasons and lunar months, although due to people being isolated in their own regions (you know, before phones and the internet) not all tribes followed the same lunar calendar.

For some, the year consisted of four seasons, while other tribes counted five seasons to a year. Some tribes defined a year as 12 moons, while others assigned it 13. Certain tribes using the lunar calendar added an extra moon every few years, to keep it in sync with the seasons, according to the Farmer's Almanac.

The April Pink Moon goes by a few other names too. Because of those pesky communication limitations from the olden days not everyone got the memo that it had been decided to call April's full moon the Pink Moon. One alternative name is the Sprouting Grass Moon, aptly named for the time when new blades of grass break through the Earth's soil.

Coastal tribes called it the Fish Moon to mark the time when certain fish swam upstream to spawn, while others referred to it as the Waking Moon because animals awoke from their hibernations. The name Pink Moon was given to April's full moon by northern Native American tribes.

The Pink Moon is best viewed between April 10-12, but it might not necessarily look pink. If you're into the whole Pink Moon thing as a look, pop on some glasses with rose-colored lenses.

So, what does the Pink Moon mean for you? Astrologers say this is a time when things should start falling into place.

"Cosmically, it is all coming together — wildish energy, unavoidable challenge, self-doubt, reaffirmation, and renewal — under April’s Full Pink Moon coupled with a lunar eclipse in Scorpio," Robert McDowell said on Mooncircles. "Don’t you feel the urge to get moving? ... Would you like to take your primary relationship to the next level, or reconnect with a long-gone friend? There is no better time and place than right now, right here."

There you have it, the Pink Moon is a time to pursue your dreams and reignite to your passions. What are you waiting for?