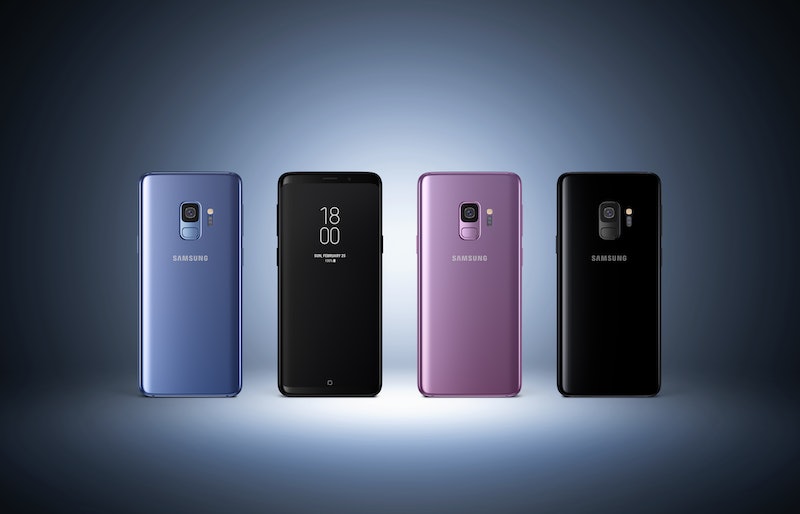 The Samsung Galaxy S8 proved its worth — as well as the worth of an Android phone in general — when it was released in April 2017 only to quickly become one of the highest-ranking camera phones on the market. But now, Samsung is back at it with a new phone — you'll want to know what the Samsung Galaxy 9 is, because in addition to being offered in a series of new colors — including a millennial purple-esque lilac! — its improved camera quality not only surpasses that of the Galaxy S8, but it also changes the camera game entirely.

Here's the lowdown: According to Samsung, the Galaxy 9 comes with a slew of worthwhile updates, like a new processor chip that will make downloads and and basic functions faster and more efficient, higher quality speakers that are now front-facing (the benefit of which is that, unlike with a down-facing speaker, it won't get muffled in your palm) and a better-placed fingerprint reader. But, the true focus of this updated phone is the camera.

Samsung put most of their focus with this update into not only sustaining, but raising their standing in the top-tier of smartphone cameras. The camera is no longer just a feature, it's a full-blown media destination: From your camera app you can now send photos to social, share with friends, and even edit, all without having to click away from your screen. Essentially, Samsung wants you to be able to hang out in your camera app without having to leave to complete certain commands of features.

Technically speaking, the camera holds onto its 12-megapixel sensor from the Galaxy S8, but it now has an updated aperture that will shift between f/2.4 and f/1.5, depending on your environment. In the Galaxy S8, the aperture was a fixed f/1.7, which mean that super bright pictures and super dark pictures, while still clear and high resolution, weren't as adaptable to changing light. That's now all a thing of the past, because with the Galaxy 9, when there's a lot of available light, it will use the f/2.4 aperture, and when there's less light, with the wider f/1.5 will take over — giving it an impressive low-light capture ability that not many other smartphone cameras can deliver.

As for video, 4K videos can now be shot at 60fps (frames per second), a massive improvement over the Galaxy S8's 30fps. The difference means the videos will never be laggy and should be as smooth and continuous and rich as watching a video on your computer or TV. Also updated in the camera is the slow-motion feature. Now, it can be raised all the way up to 960fps — which is plain terms is super freakin' slow. Perhaps the only slow feature of a phone that we actually all can rejoice about!

Another fun camera feature that we've all been dreaming about is Motion Detection — and the Galaxy 9 makes it a reality. Basically, when you're in camera mode (i.e., perhaps you're filming or taking photos of yourself, or you've just seen a celebrity and you're freaking out so much that you're slow to take photos), your Galaxy 9 has the ability to wait for movement to start recording. Once it detects motion, it will start capturing. No selfie stick or remote control contraption required! This feature will keep you from missing out on those early photos or videos that are often not captured because you just couldn't hit the record button fast enough.

The Galaxy 9 will be available in stores beginning Mar. 16, but eager fans can already pre-order the phone in the U.S. and Canada on Samsung's website.