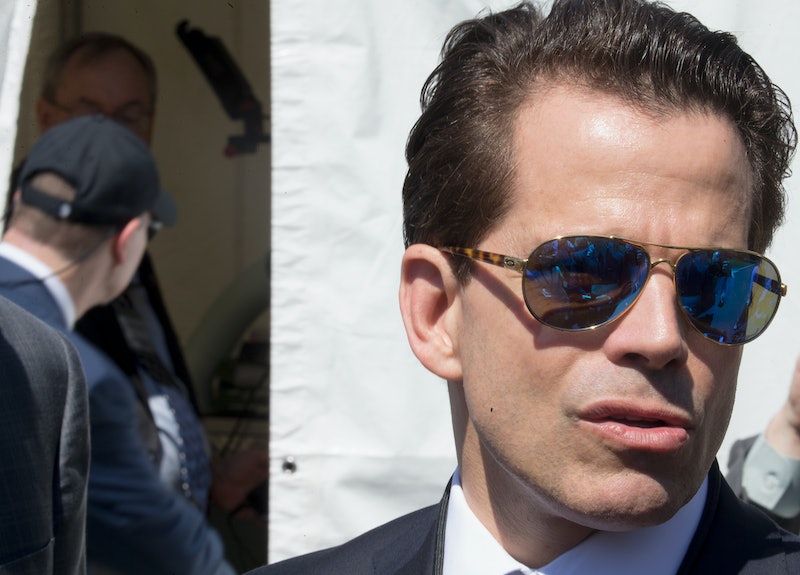 Remember Anthony Scaramucci, the former and short-lived White House communications director? Well, yet again, he's back in the news — this time with a new media venture he's calling The Scaramucci Post. If you're wondering what The Scaramucci Post is and what it will represent, then you're not alone. The Mooch released a video of himself attempting to explain exactly what kind of an enterprise The Scaramucci Post will be, and once you watch it, you'll understand how it really just raises more questions than it answers.

"The Scaramucci Post," he says, "is gonna be the center lane in a two lane highway." Now if that's already a difficult image to wrap your brain around — like, are people supposed to be driving in the median in this metaphor, or what? — it only goes deeper from here. "This is gonna be about moderation," he goes on, "But our tagline is gonna be, 'everything in moderation, including moderation.'" This, it would seem, opens to door for the sorts of insane antics that the Mooch pulled in his 10-day stint at the White House — or perhaps not.

"The Post is gonna be about what is right and wrong in society, instead of what is left and right," Scaramucci said, apparently laying down a moral framework for how his media baby will operate. If that doesn't pique your curiosity as to what kind of a position The Scaramucci Post is going to take, then you apparently haven't been paying much attention to the news lately.

Even after serving in the Trump White House, or perhaps especially after serving in the Trump White House, Scaramucci apparently has a huge problem with the rabid partisanship currently shaping Washington. He explains in the video that he views society as a split clock pendulum, where one shard has stuck itself "way far on the left" and the other has hurtled "way far on the right." This leaves space for someone, like The Scaramucci Post, to be "in the center lane, discussing with the American people what's going on in the society, and how we can make the society better."

The Post, he claims, will print "data-dependent" news and help people decipher between real and fake news floating around the media today. While media literacy is an ever more important capability these days, it seems unlikely that Scaramucci is the one best suited to promote it. “I love the president, and I’m very loyal to the president, and I love the mission that the president has,” Scaramucci said in an interview after first getting hired to the White House — although this was, of course, before he got fired only 10 days into his job.

But then again, Scaramucci was a Trump-hater before he was a Trump-lover, so perhaps he could, using his own metaphor, swing back to the center of that grandfather clock and instruct readers in the noble art of distinguishing between what is real and what is fantasy, even in Trump's America. The Post, Scaramucci insists, is part of a higher goal. "The most important thing," he says, is "making our world better for our children and our grandchildren."

Yes, these words came from the same man who called a New Yorker journalist and said, among many other things, that "I’m not Steve Bannon, I’m not trying to suck my own c*ck. I’m not trying to build my own brand off the f*ck*ng strength of the President. I’m here to serve the country.”

He can no longer serve the country from the White House, so maybe The Scaramucci Post will be his effort to do exactly that. Either way, you can check it out for yourself next week, when they hold an all-day launch party on social media on Oct 2. You'll have to bring your own popcorn, but it just might be worth it.