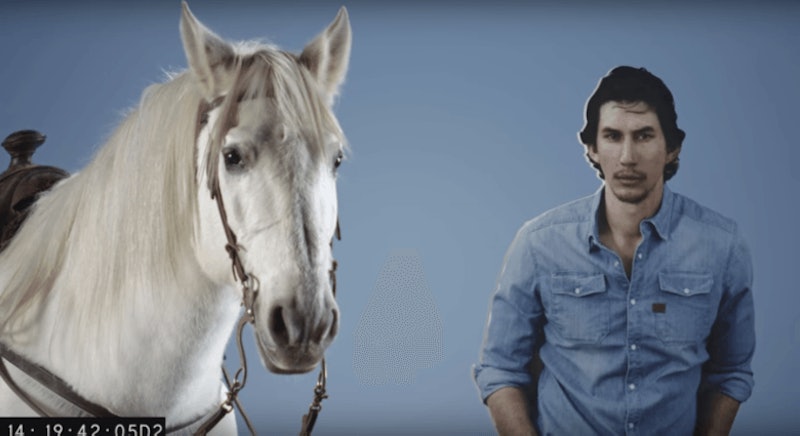 If you share my high intensity passion for snack foods, hot actors, and the art of a well made Super Bowl commercial, then there's one specific advertisement you're going to want to look out for during this years event. A Snickers commercial starring Adam Driver is set to be aired during the 2017 Super Bowl, and, as you might have gathered by the casting of the uniquely talented arthouse actor, it isn't your average commercial. In fact, the Snickers commercial for the 2017 Super Bowl is going to do what no other commercial during the legendary sporting has ever achieved; It's going to be the first ever live Super Bowl commercial.

That's right, folks. We'll all have the chance to enjoy Driver's supreme acting talents as they happen. To further drum up excitement for the commercial, Ad Week is reporting that a 36-hour livestream from the set of the Snickers commercial will happen prior to its live airing, during the first ad break of the third quarter of the Super Bowl.

If all of these mysteriously delicious ingredients have already begun to stoke your curiosity concerning the marketing campaign, then you're likely wondering what kind of tone these commercials will take. And, thankfully, there are four previews of the Snickers commercial that might help to answer that question.

As shown in the video above, the first preview provides a laissez faire, comedic teaser for the commercial in an old school matinee style. Boasting that "other less famous actors" will star alongside Driver, the preview also suggests that the commercial will feature "a showdown," as well as "stunt horses" and some other "stuff" that they're "still thinking of." Color me intrigued, guys.

The three previews that followed this appear to be making good on some of these suggestions by showing a series of casting calls for a white horse and a dead cowboy, shown auditioning alongside a cardboard cutout of Driver amid lashings of droll atmosphere.

If these previews are anything to go by, then it seems like we may well be treated to some very dry and unusual comedy stylings indeed. The likes of which we've seen Driver ace during his guest appearance on Saturday Night Live and his deadpan, pathos infused comedic delivery as Adam Sackler in Girls.

The commercial, which is being developed by advertising agency BBDO New York, follows two previous Snicker commercials for the Super Bowl. In 2015, the same agency developed a commercial that starred Danny Trejo as Marcia Brady from The Brady Bunch. Meanwhile, 2016's offering from them was a similar type of commercial where Willem Dafoe portrayed Marilyn Monroe.

So, it's pretty exciting to see that the company has taken a different tactic with this upcoming commercial. And, fans of Driver, showdowns, and offbeat experiments with art forms and comedy can look forward to catching the commercial when it airs during the Super Bowl on Sunday, Feb. 5, on Fox.