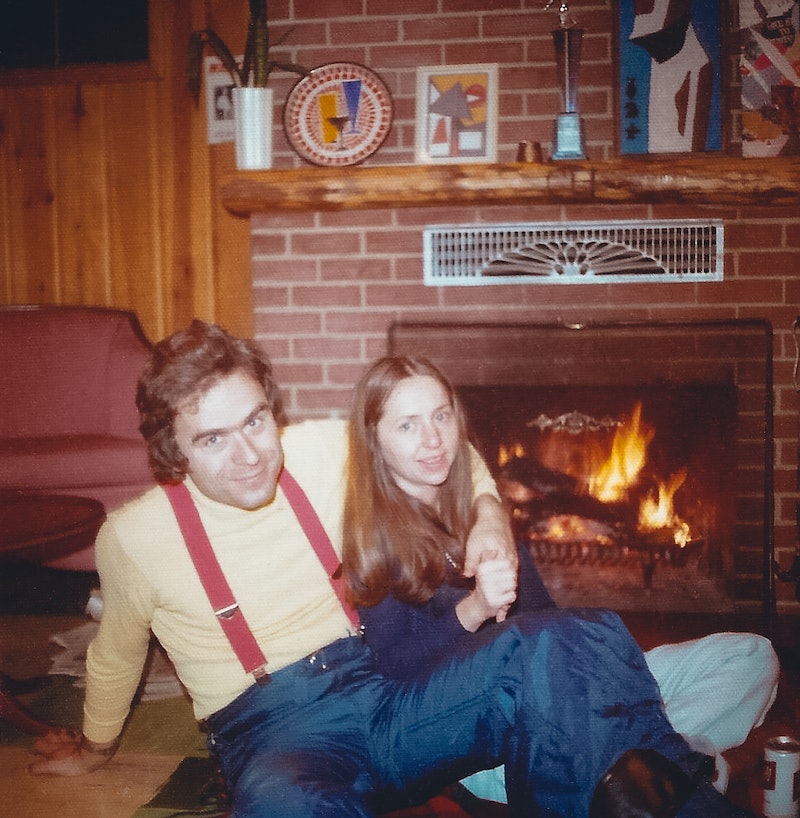 Get ready for some more true crime to investigate, because another Ted Bundy series is being developed — this time told from the perspective of his long-time girlfriend Elizabeth Kendall. The five-part series will be will launch exclusively on Amazon, but what is the UK release date for the new Ted Bundy docuseries, Falling For A Killer?

The docuseries — which Amazon says "will forever change the Bundy narrative and provoke a discussion around gender politics that hauntingly resonates today" — is set to be released sometime in 2020, but no specific date has been announced just yet. I reached out to Amazon for further insight on a release date, and they say they'll provide more info when it's available. Although it looks like it could be in early January. In a press statement sent to Bustle, Amazon mentions that the series will coincide with the release of the updated version of Kendall's book The Phantom Prince: My Life with Ted Bundy on Jan. 7, 2020.

"I handed Ted my life and said, 'Here. Take care of me.' He did in a lot of ways, but I became more and more dependent on him," Kendall said in her memoir (via Refinery29). "When I felt his love, I was on top of the world: when I felt nothing from Ted, I felt that I was nothing."

Initially published in 1981, Kendall's memoir has been updated and expanded to follow along with the series depicting the years she spent with Bundy. As described by Amazon, this version of the book features "a new introduction and a new afterword by [Kendall], never-before-seen photos, and a new chapter from the author's daughter, Molly".

The Phantom Prince: My Life with Ted Bundy, Updated and Expanded Edition
Amazon

Both Kendall and her daughter feature prominently in the docuseries, where they will "share their experiences with new unsettling details about Bundy, the inconceivable pull he had on women, and an abundant archive of never-before-seen family photos. Falling for a Killer will also feature survivor's of Bundy's crimes, with some that have yet to share their stories.

While you're waiting to add Falling for a Killer to your true crime watchlist, there are plenty of other docuseries to watch on to familiarise with the serial killer and his crimes. Earlier this year, Netflix dropped not one, but two insight's into Bundy's life. Created by filmmaker Joe Berlinger to mark the 30th anniversary of Bundy's execution, allowing viewers to evaluate how Bundy committed his crimes.

As Refinery29 writes, the film Extremely Wicked, Shockingly Evil & Vile was also based on Kendall's memoir and told from her perspective. Whereas the docuseries Conversations with a Killer: The Ted Bundy Tapes was "based on interviews of Bundy and those around him," as the Independent reports, and followed the timeline of his murders up until his execution in 1989.

While both Berlinger's film and docuseries opened up Bundy's world even further, Falling for a Killer will give the women he affected a chance to take hold of his story instead.

More like this
A New Netflix Doc Will Explore The Unsolved Murder Of Jill Dando
By Sam Ramsden
Olivia Colman Stars In First-Look Trailer For BBC's 'Great Expectations'
By Sabah Hussain and Sam Ramsden
Everything To Know About The 'Daisy Jones & The Six' TV Series
By Maxine Harrison and Brad Witter
9 Time Catherine Cawood Was An Absolute Badass In Happy Valley
By Sophie McEvoy
Get The Very Best Of Bustle/UK
Sign up for Bustle UK's twice-weekly newsletter, featuring the latest must-watch TV, moving personal stories, and expert advice on the hottest viral buys.