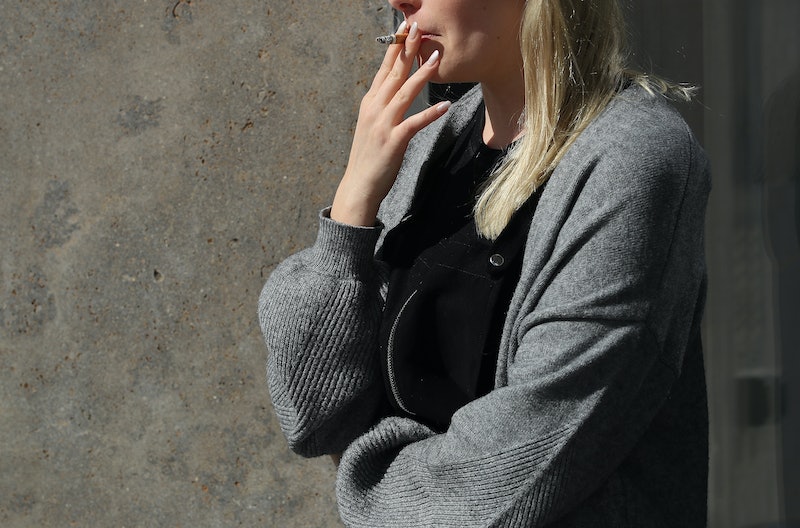 You already know that smoking, and being exposed to secondhand smoke, can be detrimental to your health. But, there are other ways cigarette smoke can wreak havoc on your immune system. Thirdhand smoke — aka, smoke residue that lingers on fabrics and on surfaces — can have serious consequences for your health, and a new study quantifies just how bad these can be. If you aren't around indoor smokers, or you wash your clothes after being exposed to smoke, you might think you don't have to worry about this. However, if you've ever been to a hotel that allows smoking in its rooms, then you're familiar with that stale cigarette-smoke smell that coats every set of drapes and clings to every piece of furniture.

New Scientist reported that a study conducted at the University of California, Riverside found that curtains, upholstery, and carpets exposed to longterm cigarette smoke had a negative effect on mice. According to the study, after just one month of exposure the mice had a 50 percent increase in inflammatory molecules in their blood and livers compared to the mice who were not exposed to the contaminated fabrics. If you were born in the '80s when smoking was allowed everywhere, including on airplanes, you might think you're doomed. However, the studies are still in their early stages, and mice and humans aren't an apples-to-apples comparison. While it's definitely something to be aware of, you're probably going to be just fine.

"It’s important to note that a one-off or casual exposure is not going to have measurable impact on people," Dr. Taylor Hays, who works in the Nicotine Dependence Center at the Mayo Clinic, told New Scientist. What's more, thirdhand smoke is more dangerous to children than adults, a study published in the journal Clinical Science noted. A study in mice found that exposure to thirdhand cigarette smoke in vitro and early during life stages, resulted in cellular activity that has been associated with an increased risk for developing lung cancer.

"Compared with adults, small children face greater health risks from THS exposure because they typically spend more time indoors and have age-specific behaviors that bring them in close contact with surfaces and dust (i.e., crawling, mouthing, and/or ingesting non-food items)," the study explained. "Moreover, children are more sensitive than adults to pollutants for several reasons: increased respiration rate/body size, larger exposed surface area/volume ratio, thinner skin, immaturity of immunologic systems, and low metabolic capacity." Even parents and hospital workers who smoke outdoors still pose a risk to infants and children because the smoke lingers on their clothes. The study noted that babies in neonatal intensive-care units had chemicals from cigarette smoke present in their urine.

While these findings are troubling, especially because people born before the '90s had a much greater exposure all types of cigarette smoke than people who were born after smoking was banned in many indoor spaces, the study also stated that the longterm effects of being exposed to thirdhand smoke are not known. And, there is currently no concrete evidence that thirdhand smoke will increase your chances of developing lung cancer later in life (because, well, if you're reading this, you're probably not a mouse). Mice and humans have different genetic makeups, and what causes cancer in mice may not cause cancer in humans, which means further studies are warranted before any definitive conclusions can be drawn.

While it's almost impossible to avoid exposure to thirdhand smoke, but there are some things you can do to limit it. Wash your clothes after being around smokers, don't smoke indoors, don't let others smoke in your home or car, and don't stay at hotels that allow any kind of indoor smoking. But it's also important to remember that exposure from time to time is not going to do you in, so there's no need to cancel your girls' weekend.