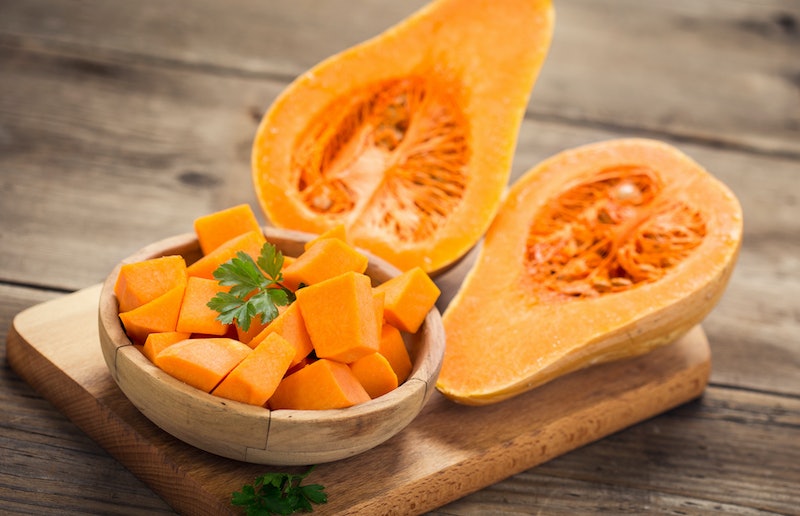 From medication to poor nutrition to genetics, a lot of things can make your hair fall out. But, there's another hair-loss culprit that's pretty surprising. According to a new report published in the Journal of the American Medical Association Dermatology, two women in France became sick in separate instances after eating bitter-tasting squash and developing a rare condition called "toxic squash syndrome." Also known as cucurbit poisoning, the condition presents with food-poisoning symptoms and substantial hair loss after eating different types of squash, according to Live Science.

Both women said that the squash tasted bitter, which points to high levels of a group of chemicals known as cucurbitacins. An overabundance of these chemicals are caused by accidental cross pollination of cultivated and wild squash by an insect, the report explained. When foods like squash, cucumbers, melons, and zucchini taste more bitter than usual, it's generally a sign that they might not be safe to eat. While hair loss from eating squash sounds like a high price to pay for enjoying some pumpkin soup, the effects of cucurbitacins poisoning can be much more serious if you consume a lot of the compromised food.

"These toxins when absorbed into the blood causes swelling in the liver, pancreas, gall bladder, and kidney," Dr. Shravan Bohra, chief gastroenterologist, at Apollo Hospitals, Ahmedabad, India, told DNA India. "This in turn can lead to multi-organ dysfunction, which can be fatal in some cases." Case in point, The Daily Meal reported that a German man died in 2015 after eating zucchini containing high levels of cucurbitacins. The man and his wife made a stew with the zucchini they had received as a gift from their neighbors. After eating the tainted vegetable, the woman's face reportedly began to turn yellow, and she and her husband both started to feel sick.

While the woman recovered, her husband — who ate more toxic stew than she did — passed away at the hospital. The U.S. Food Safety blog reported that cases have been reported in the U.S. as well. One woman in Seattle became ill after eating a small amount of acorn squash. However, the bitter taste stopped her from eating more and she ultimately recovered. Your body often gives you signs when something is amiss, and it's important to listen if you think something tastes off. In this case, ceasing to consume the toxic squash when she noticed the bitter taste may have saved this woman's life.

"If the squash is bitter, don't eat it. On rare occasions, a zucchini or a yellow straightneck plant will produce quite bitter fruits. According to horticulturists at the Alabama Agricultural Experiment Station, bitter squash has high concentrations of cucurbitacin E, which is highly toxic to humans and which probably results from chance reversions to ancestral forms or from pollination by wild species," Mother Earth News explained. "Because even a tiny amount of cucurbitacin E can be harmful, don't eat any squash that has a bitter taste."

Personally, I see squash as more of a Halloween decoration than a food, but I do regularly eat cucumbers and zucchini, and this is the first time I've heard of toxic squash syndrome (which is not to be confused with toxic shock syndrome, a similarly-rare bacterial infection that's associated with excessive tampon use).

While toxic squash syndrome is rare, if you're at a dinner party, you might be reluctant to voice your concerns that the food tastes off, which might be why these people continued to eat their food despite it being described as "inedible." But, these stories about toxic squash syndrome are cautionary tales. Don't be afraid to speak up if that pumpkin soup tastes excessively bitter. While the host might initially be offended, you could save yourself and others horrific stomach cramps or hair loss, and you might even save their lives.