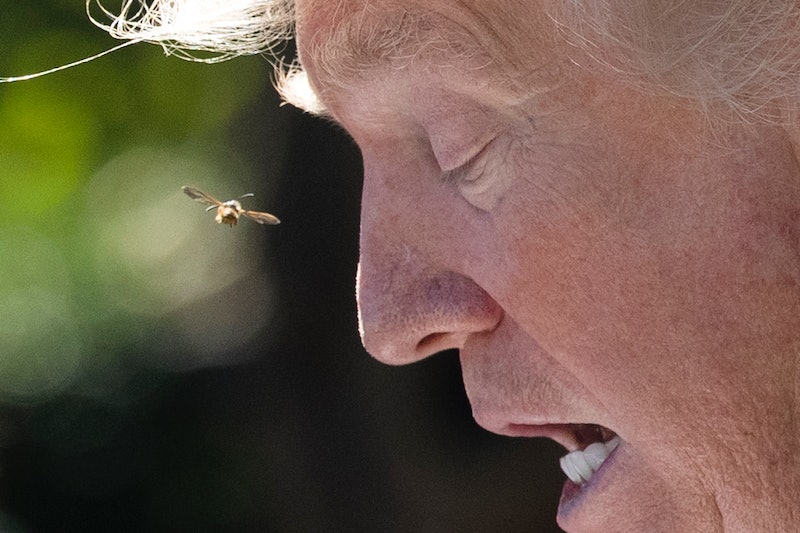 The way Trump speaks is very distinct. He gets ahead of himself, jumping from one incomplete sentence to another to make a point he repeats over and over again. As he reiterates that thought, he throws in hyperbolic words like "the best" or "the greatest you've ever seen" without adequately backing up the lofty claim. Since this pattern occurs pretty consistently, it might not surprise you that Trump speaks at a fourth grade reading level. In fact, the vocabulary and grammar he uses in public speeches is worse than that of any modern-day president.

Questions regarding the reading level at which Trump speaks didn't come up out of the blue. Instead, the president prompted them when he defended himself as a "stable genius" on Twitter. The claim was made after journalist Michael Wolff's juicy Fire and Fury: Inside the Trump White House was released. In response to the buzz around the tell-all book, Trump tweeted:

Actually, throughout my life, my two greatest assets have been mental stability and being, like, really smart. Crooked Hillary Clinton also played these cards very hard and, as everyone knows, went down in flames. I went from VERY successful businessman, to top T.V. Star ... to President of the United States (on my first try). I think that would qualify as not smart, but genius [...] and a very stable genius at that!

Days later, factba.se, a database with a "complete collection of Donald Trump interviews, speeches, tweets from twitter (including deleted tweets) and more," started the analysis.

Though "genius" status is not defined by reading level, a person does sound more intelligent when they showcase a robust vocabulary and use correct grammar. But the system used in this analysis, the Flesch-Kincaid scale, doesn't measure a person's level of genius or even intelligence. Instead, it measures readability, or how easy it is for someone else to understand Trump's words.

The scale applied in this analysis, which uses the first 30,000 each president uttered while in office, is based on two numbers. The first is the Flesch-Kincaid readability score. If you score low in this category, it actually indicates your speech is too complicated for the average person to comprehend. The second number is the lowest grade level able to understand your speech.

A report from Harvard called "The Literacy Problem," estimates that the average American adult's reading level ranks anywhere between eighth to ninth grade. So, it's safe to say the majority of the population definitely understands what Trump is saying (regardless of what he says or how well he says it). According to the report, though, someone who can't read above a fifth grade level is actually considered "functionally illiterate," meaning they supposedly aren't literate enough to "fully function in society." Essentially then, according to this measure, Trump speaks on a level that's functionally illiterate.

Still, it's possible that Trump's propensity to speak at such a low reading level is intentional. Perhaps it's a ploy to make him seem more relatable — and less like a scholarly politician perched high up on Capitol Hill. After all, a president wouldn't want to speak at a reading level that's higher than that of the general population. If he did, he could sound pedantic, or his words might go in one ear and out the other.

It's not to say, though, that Trump couldn't bump up his speech and include a new array of words or more eloquently explain himself. For example, whether you agreed or disagreed with his politics, Obama was a talented and articulate public speaker. According to the Flesch-Kincaid scale, he spoke at a high ninth grade reading level.

Ultimately, it's important to remember that the Flesch-Kincaid scale can never determine whether or not someone is a "genius." Still, if Trump wants to prove he's actually super intelligent, he'll have to do more than brag about his so-called "genius" on Twitter — brushing up on his vocabulary and grammar might be a start.