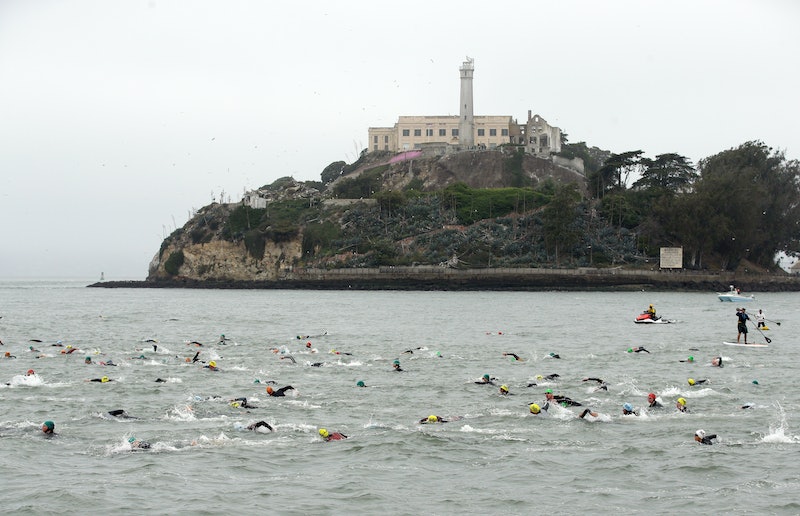 On the morning of Thursday, Nov. 23, a group of Native American activists and demonstrators arrived at the former prison island of Alcatraz in the San Francisco bay for an annual event, along with a particularly high-profile supporter. And if you saw any of the headlines later in the day ― the gathering began in the pre-dawn hours of Thanksgiving, to be clear ― you might have found yourself wondering: what is "Unthanksgiving Day," and why did Colin Kaepernick show up to support it?

Reports of Kaepernick's involvement in the Native American event swept across both the mainstream media and social media alike on Thursday, drawing a considerable amount of attention to the demonstration. What it's actually called is The Indigenous Peoples Sunrise Gathering, although it's sometimes also known as "Unthanksgiving Day."

It's an annual demonstration that's been held since 1975, in remembrance and recognition of an occupation of the island by Native American political activists that ran from 1969 to 1971. The occupation was an effort to have Alcatraz, which ceased operation as a federal prison in 1963, turned into a Native American cultural and educational center, according to The Mercury News. The event also serves as a statement of protest against the genocide and displacement of indigenous people, a history that's inextricable from the European colonization of North America.

Kaepernick briefly addressed the assembled crowd, making a statement of solidarity between the protests and political stands he's taken with those of Native American activists and their cause.

"I’m very humbled to share this space with all of you,” he said, according to The Independent. “Our fight is the same fight. We’re all fighting for our justice, for our freedom. And realizing that we’re in this fight together makes us all the more powerful.”

Donning a t-shirt with an image of the late Native American leader Sitting Bull on the chest, Kaepernick was reportedly met with appreciation from the other gatherers. According to The Mercury News, in fact, he was given some honorary eagle feathers, a show of respect for his involvement.

Again, to be clear, this is far from the first time Native American activists have staged this symbolic and ceremonial gathering. It's been going on for more than 40 years, in memory of the natives who took over Alcatraz for that 19-month span, attempting to spur the U.S, government to turn over the island to them, to be made into a university and cultural museum.

The occupation ended after the island was raided by federal authorities in 1971, under the orders of President Richard Nixon. The occupation did influence the end of the U.S. government's tribal termination policy, however, which had sought to force the assimilation of Native Americans, stripping them of tribal heritage.

In the caption of an Instagram post highlighting the event on Thursday, Kaepernick described the cause he wanted to draw more attention to, noting that the traditional, mainstream vision of Thanksgiving in America overlooked the ongoing, systemic oppression of Native American tribes.

Every year we participate in a tradition that is rooted in tragedy. Try as we must to make Thanksgiving about food, family, fun, and forming fond memories, it doesn’t erase the fact that the Natives of this land were (and continue to be) the original victims of American systemic oppression.

Kaepernick, 30, played quarterback for the San Francisco 49ers last season, but has not played professional football since. He drew an intense amount of scrutiny for first sitting, then kneeling during the playing of the national anthem starting in 2016, an act of racial justice protest that swept through the NFL like wildfire.

Currently, despite boasting career statistics superior to some starting quarterbacks and almost uniformly superior to the ranks of the NFL's backup quarterbacks, he has not received a single job offer since. He has stayed busy all the same, however, lending his name and more than $800,000 of his money to a number of charitable and humanitarian causes. In