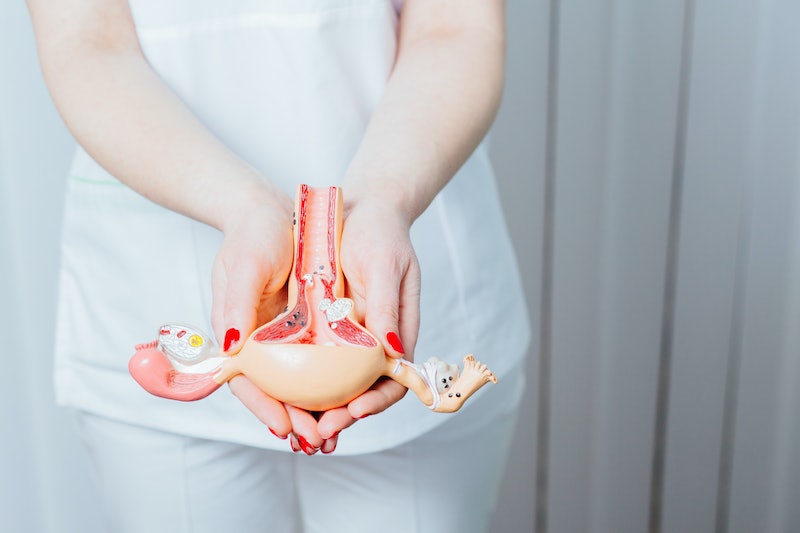 After five years of unbearable period pain with little insight from doctors, 19-year-old Molly-Rose Taylor did what most of us do when faced with a pressing health issue. She took to the internet to find out what was wrong. Now, the teenager wants to raise awareness of uterus didelphys, reports Metro, so that other people don't spend years wondering or have to resort to googling symptoms to get a diagnosis.

In a nutshell, a person with uterus didelphys is a person with a double uterus. In Taylor's case, she was also born with two cervixes and two vaginas (though not everyone with the condition has two of these).

Around one in 2,000 women are thought to have the congenital abnormality, obstetrician-gynaecologist Robert Zurawin told Scientific American. And, as Cosmopolitan reports, the condition is believed to be more common in women born with just one kidney. But, despite this knowledge, most people have never heard of it.

With symptoms ranging from zero to excruciating pain, it's well worth knowing the ins and outs of uterus didelphys. Not only for yourself, but for any friends and family members who may have period and pregnancy problems. Here's everything you need to know.

As a female foetus develops, two tubes usually join to create a single uterus, explains the Mayo Clinic. But, sometimes, this process doesn't fully happen, allowing two uteruses to grow. A person with a double uterus may have a single opening into a single vagina or may, like Taylor, end up with two openings and two vaginas. In such cases, it's common to find the two openings separated by a thin tissue wall, known as a longitudinal septum.

Unfortunately, the cause of the condition is unknown. Experts believe genetics may have something to do with it, but are unable to say for sure.

Quite often, uterus didelphys causes no symptoms and may only be found during a routine pelvic examination. That's not to say that every person with the condition experiences no problems. Some people find their period pain to be particularly severe and may notice that a tampon fails to soak up all the blood because it has only been inserted into one vagina, states the Mayo Clinic.

"When I first started my periods, doctors would blame my age and say my body is still young and can’t cope," Taylor told Metro. "But now I know it is because I am having two periods at once. I have been on birth control since 12 years old to try and reduce the heavy flow and fainting." Taylor also said that tampons "would fall straight out" when she tried to use them and noted that sex was "very painful".

The condition can cause problems with pregnancy too, per the Mayo Clinic, by increasing the risk of miscarriage or premature birth. It is also possible that kidney issues result, notes Healthline; a symptom found in between 15 and 30 percent of people with a double uterus.

Can it be treated?

A doctor can diagnose the condition via a scan such as an ultrasound or MRI, Healthline states. (It can be difficult to detect without this, reports Women's Health, as tampon use and sexual intercourse can force one vagina to become "dominant".)

People with the diagnosis may be offered a couple of options if symptoms are detrimentally impacting their life. Both involve surgery. One removes the longitudinal septum, per Healthline, and can ease the process of childbirth. The other involves correcting the double uterus and may be suitable for people who have experienced recurring miscarriages. However, this treatment path is rarely followed.

Another thing to take into account is contraception. "Often the two uteri are of unequal size, so fitting an intrauterine device to each may not be possible," Dr. Virginia Beckett, a spokesperson for the Royal College of Obstetricians and Gynaecologists, explained to Cosmopolitan. But, she added, the contraceptive pill does work.

"I tend not to dwell on my condition, and I will cross that bridge when I get there," Taylor told Metro on the topic of pregnancy risks. "If I wasn’t persistent, then I would still be clueless, and I am sharing my story to raise awareness for other girls and women who may be going through the same."