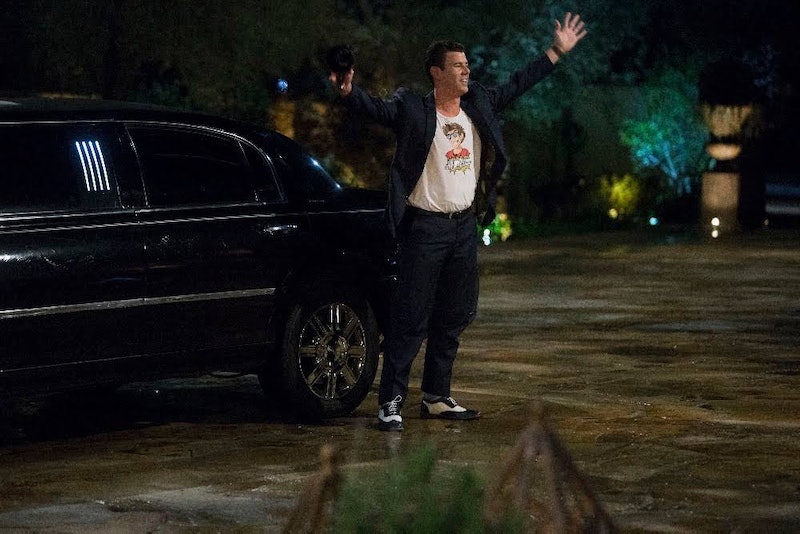 The job descriptions on this season of The Bachelorette are fascinating, to say the least. For Rachel Lindsay's Bachelorette season, the occupations listed include "Aspiring Drummer" and a professional "Tickle Monster." One contestant's job in particular has people scratching their heads, simply because they have no idea what it could mean. Contestant Lucas lists "Whaboom" as his occupation. That's it. There's no further explanation given. There has to be more to his story than just a singular nonsense word. So, what is Whaboom?

In a Facebook live video where he introduced all of the contestants for this season of The Bachelorette, host Chris Harrison addressed the fact that people have been asking him what Whaboom means. Harrison said, "It's a lifestyle. It's and essence. It's who he is. It's a noun, it's a verb, it's an adverb... like, you can be Whaboom and you can be Whaboomed and you can Whaboom and you can call somebody a Whaboom." Basically, no one has any idea what the hell it means. And I can't help but think that anyone who lists something this mysterious and hard to explain seems to be desperate for attention. Already, I am not impressed, Lucas.

It doesn't seem like I am the only one that is annoyed by this whole Whaboom thing either. Harrison himself seems to be miffed to have to describe something that this guy seems to have just concocted. He also said that Lucas is one of those guys at a party that you can't tell whether there are endearing or whether you "want to strangle him in his sleep." He then went on to say that some people will straight-up hate him, and some people will love to hate him, which is Bachelor Nation code for "he is there for drama and will likely be one of the villains of the season."

I have to be honest, I already can't deal with Lucas. The whole Whaboom thing is really weird and sounds immature. I don't think Rachel is going to be impressed at all by this. She appears to be mature, smart, and to have a better sense of humor than Lucas' made-up word can appeal to. Who knows, maybe Lucas will surprise me and this Whaboom thing won't be that big of a deal. I doubt it, but I am willing to to admit defeat if I am wrong. Either way, Lucas and Whaboom will have the chance to explain themselves on the May 22 season premiere.

More like this
Everything We Could Expect In Gabby & Rachel’s Season Of The Bachelorette
By Kadin Burnett
Bachelor Nation's Blake Horstmann Is Dating 'Love Is Blind' Star Giannina Gibelli
By Jake Viswanath and Radhika Menon
What’s New On Netflix: Lana Condor’s Ghostly Comedy & A Sexy Reality Series
By Arya Roshanian
Yes, You Can Really Charter Below Deck Med’s New Superyacht, Home
By Brad Witter
Get Even More From Bustle — Sign Up For The Newsletter