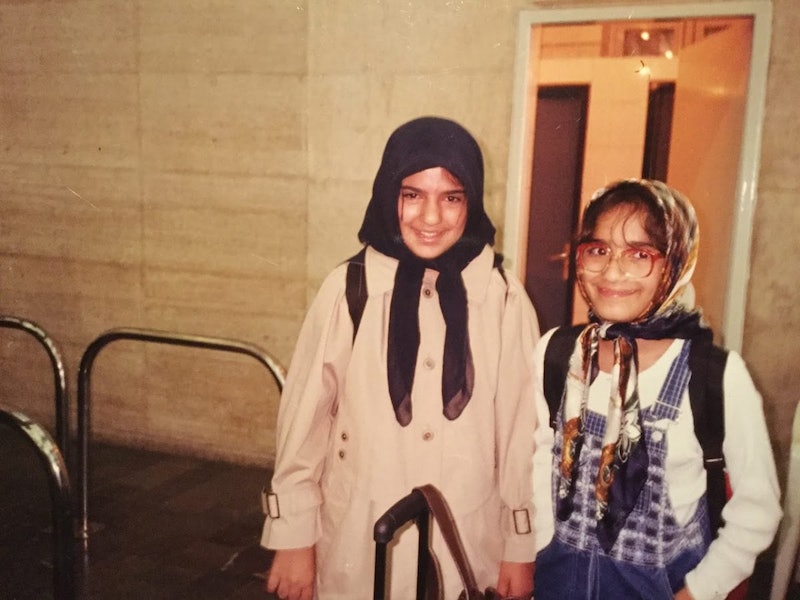 On May 8, I woke up with a knot in my stomach. I knew that the Trump administration would make a decision that day about the Iran nuclear deal (or, as it's formally known, the Joint Comprehensive Plan of Action). I had been following the news closely for weeks, and I'd hoped that the vitriol the president kept spitting at Iran would become another item on the list of things he says without any real desire to follow through.

I am the daughter of Iranian immigrants. In the 16 months since Trump took office, Iranian-Americans have been hit hard. When the president's travel ban blocked people like my family from coming to the U.S., and ultimately stopped most of my family from attending my July wedding, we told ourselves that it wouldn't last.

I felt so betrayed by a country, the United States, that my family had worked hard to be a part of.

In the year since the travel ban, the administration's rancor towards the Iranian government has only grown. Trump has used the threat of terrorism to disenfranchise and punish everyday Iranian citizens — who, just like the people living in the States, are only trying to get by in politically turbulent times.

On the morning of May 8, I was trying to get ready despite the gnawing feeling in my stomach. I looked at my husband, and I whispered: "If the United States violates this deal, I'm afraid it will start a war with Iran." He was speechless. "Great," he muttered sarcastically. He went back to bed.

That morning, I was remembering the stories my family had shared with me — stories of wars in Iran perpetuated by the United States and proliferated by our foreign policy. I remembered my uncles telling me about mothers during the Iran-Iraq war who risked their lives to get their kids new socks as bombs exploded in the distance, just so their kids would have something new to wear for Nowruz (the Persian New Year), per Iranian tradition.

And I thought of what I'd read in the news. How the 2012 sanctions crippled families, plunging them into poverty as they tried to afford basics like milk and vegetables. I wondered if my aging grandmother would have access to the medicines that help her manage the pain that comes with old age. Would sanctions prevent them from being imported?

I felt dumbfounded by what lay in front of the Iranian people. And I felt so betrayed by a country, the United States, that my family had worked hard to be a part of.

Later on May 8, I read that Trump had, in fact, scrapped the deal. Reading his statement, I felt a chill run through my body. Iran's government had held up its end of the bargain — but Trump had violated the JCPOA anyway.

To me, Iran's response to the announcement revealed a desire to give diplomacy a chance to work. But the events that have unfolded on the part of the Trump administration have left me feeling hopeless.

For just a moment this past winter, Iranian news took center stage. Iranians were protesting in the street, demanding answers for the hardships they had endured. But the coverage didn't tell the full story. It didn't tell the story of a people victimized by a decades-long battle between the Iran and U.S. governments. The people whose suffering America is complicit in. The people who just want to go to work, come home, and have enough to eat.

It was hard enough to marry my husband without so many people I love being at my side. But this isn't about me. As the negative rhetoric and misguided policy decisions against Iran amplify, I am worried not only about my family in Iran — but the millions upon millions of everyday Iranian people victimized by Trump's decision.