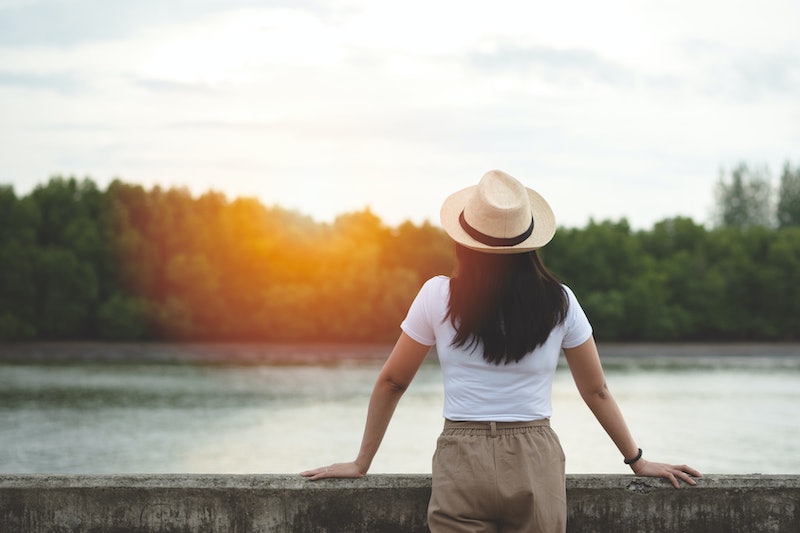 I’ve always had relatively large boobs. I was almost thirteen when I went through puberty, and my lanky frame quickly evolved into one that started filling my clothes better, with C cups as soon as I entered the eighth grade. Kids started bullying me about my cleavage by calling me ‘Busty’, or BMW (an abbreviation in our mother tongue, Urdu, for ‘chick with big boobs’). I lived with my dad as a teenager, and bra shopping with him was incredibly awkward, but I appreciated that he was there for me during this stressful time of alphabetized cup sizes and uncertainty. Bras were something I was convinced I had to wear, out of practicality rather than embodying my sexuality or feeling good about myself. But it never occurred to me that people might not wear bras at all until I moved to North America, years later.

In Pakistan, where I grew up, you don’t take your bra off. Never mind that, you don’t think about your nude breasts, let alone discuss the development of your body, period. Stigma around sex, sexuality, and body parts, was ingrained in me as I grew up, as it was with the other women I grew up with — to the point where I had friends who slept in their bras (which can cause tissue indentation and restrict circulation) for the sake of convenience, and friends who had mastered the art of quickly putting on a bra while fully clothed.

I could never leave my bedroom without my bra on, no matter how loose-fitted my sleepwear was. Older female relatives would tell me to dress more modestly, and friends would give me a dirty look if I went to sit at the dining table for breakfast after a sleepover without a bra on underneath my sleepwear. Growing up, I internalized that breasts are shameful, and the female body is a burden, not a blessing, with only one purpose — reproduction. But this inability to acknowledge, let alone talk about our bodies can have unintended and serious consequences.

Over 40,000 women die of breast cancer per year in Pakistan, according to the Karachi-based newspaper DAWN, giving the country the highest rate of breast cancer in Asia. Though it's a myth that excessive bra-wearing can lead to cancer, a lack of understanding or awareness of our breasts can still be deadly. "[The] majority of cases in Pakistan are [not] diagnosed in time because of lack of awareness and cultural taboos that drive women to keep the disease a secret," Dr. Lubna Vohra, a consultant surgeon, was quoted as saying in DAWN. If this isn’t enough reason for us to start embracing our bodies, and stop harboring shame around them, then I’m not sure what is.

I finally experienced the power of body positivity when I moved to Toronto at eighteen. It was a far different experience than the ones I'd had growing up. As much of a culture shock as my move to Toronto was initially, I couldn’t help but admire people who rocked the side boob, who visibly wore bralettes, people who didn’t care their nipples were hard in broad daylight and mid-conversation. It was fascinating. It was exhilarating. To see women embrace their bodies like that, even if they received an unwanted gaze, made me yearn for the same confidence.

But the idea of going bra-less cold turkey was frightening to me. After a year and a half of living in Toronto, I started to swap my painful, padded wired bras for unpadded wired bras. I gradually worked my way down to a wireless minimizer bra with no padding, with the intention of getting as close to totally bra-less as I can. I no longer force myself to suffer from chaffed sides and side-boob rashes, visible lines where my circulation may or may not be compromised, or indentation from tight straps on my shoulders.

I used to believe breasts were just burdens, but after years of struggling with these thoughts, I’ve come to realize that the exact opposite holds true. I’m not a burden; I’m a warrior. Twelve years post-puberty and I still find my boobs slightly obnoxious, but I like them much, much more than I used to.