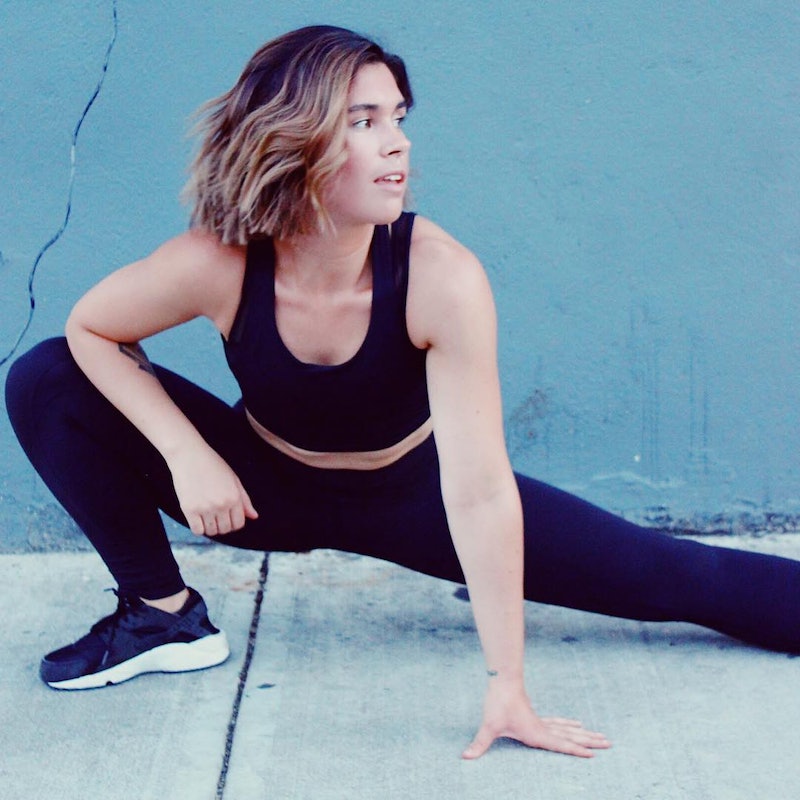 Like many trainers, I was a professional dancer before I found fitness. I began dancing at three years old; the joy I associate with movement is deeply ingrained in me. But growing up, my dance training was pretty intense. I don’t remember ever being explicitly told I had to look a certain way by my teachers or peers, but my desire to be the best, coupled with not knowing how to manage my emotions around my parents' difficult divorce, manifested in an eating disorder, starting around age 10, that spanned most of my life. I learned to control my body because I couldn’t control casting, my parents' relationship, or feeling good enough.

I started teaching Pilates when I was 22 as a fluke. It was only ever supposed to be the day job so that I could devote more time to auditioning, training, and gigging in the competitive New York dance world. Pilates promised a flexible schedule and excellent cross-training for a dancer. I was more surprised than anyone when I realized how fulfilled it made me feel. For the first time, I really felt like I was not only doing a service, but I was doing it effectively. Being forced to speak publicly several hours a day, to be looked at as an authority at the front of a classroom, was terrifying at first. But eventually, teaching helped me find a genuine self-confidence I never really had before. I got less nervous speaking in front of strangers and started to trust myself as an expert. I began to look at movement as a purely enjoyable thing, rather than something I had to excel at to be worthy of doing.

Even as I was feeling more empowered by the day through teaching, I was still sick. I transitioned from alternating bouts of anorexia and bulimia to orthorexia, aka an obsession with “clean” eating. I became fixated on being as healthy as possible. My fitness routine mirrored my eating habits: I took multiple classes a day spurred by the same perfectionist instincts I had as a dancer, that were just as easy to hide in plain sight as a trainer. Because wellness culture looks at these habits as disciplined and “clean,” it was easy to disguise the fact that it was obsessive behavior.

But as I grew as an instructor, and developed close relationships with my students, I noticed that I was often a sounding board for all of their insecurities. Stunningly beautiful women would take my class and complain about their stomachs, arms, thighs, butts. It kind of blew my mind to think that they could hate these things on themselves, even though I still hated my own body. Out of nowhere, their negative self-talk felt like a real problem. I became self-conscious of how I talked in class because people were looking to me for the answers for their insecurities.

In the past, I was definitely guilty of the shameful verbiage you often hear in group fitness. But I cut out the expressions like “earn your dinner” as motivation and made a point to cue from an educational standpoint. I’m always happy to speak on what muscle is working, but I intentionally explain why strength or mobility is necessary for your body to function, rather than to have any “look.” I’d push my students towards the sense of pride they’d feel after reaching a new personal record instead of encouraging reminding them “summer is coming!”

I don’t think I was initially very concerned about my own health, but the impetus to actually address my issues sprung from my wanting to “walk the talk” I was giving the women showing up to my class every day. I started sharing my own personal mental health evolution and body image challenges on Instagram. The supportive feedback I got was overwhelming. Not only did my clients relate, but they started sharing their own stories of shame around their bodies. That dialogue alone was so healing everyone involved. The sheer repetition of speaking about exercise as a means to accomplish more than just losing weight helped reinforce my own relatively new belief system and created a safe space for people to practice enjoying their bodies. I started cognitive behavioral therapy again and was introduced to somatic experiencing, an alternative form of therapy for PTSD that builds mindfulness skills by focusing on the physical sensations that accompany uncomfortable thoughts. My eyes were opened to just how badly I’d been treating myself, and how real the connection between our physical selves and our mental selves is.

These days, instead of running on the treadmill until I’ve burned off all the calories I consumed that day, I work towards specific functional goals — evening out muscular imbalances, doing the full expression of a push up without dropping my knees, setting the box to the next highest position for a box jump — so that I can get that feeling of mastery and endorphin rush, but it’s not based on losing weight or fitting a particular size. I still strive to eat a real, unprocessed, nutrient-dense food, but its not actually a diet. I eat intuitively and don’t deprive myself of anything or count macronutrients. I did gain weight and muscle, which was also uncomfortable and scary in the beginning, but now I see how my butt and legs convey my strength and hard work.

Every now and then, I will take a trendy new class and hear the instructor tell me a certain move will get rid of my “problem areas,” which I find really triggering. I think it’s irresponsible for a teacher to tell a student that something is “wrong” with their body, but I don’t blame them personally — they are just reiterating the messages women get every day. I also just find it simply distracting, because I like to use my workout time as self-care — and being reminded about my insecurities takes me out of the joy of movement.

Like any human being, I do feel bad about my body sometimes. I’m fully aware of how easy it would be to settle into my old habits. Fitness can be just as competitive as dancing, and just as focused on how you look. The main difference between my mindset now and then is that today, I can identify triggering thoughts when they happen. My ability to acknowledge them as non-reality based gives me power over them. If the voice in my head gets negative, or I compare myself to other women, I do a short meditation: I take several breaths in my nose and out my mouth and repeat in my head that I am enough and worthy just as I am. I also remind myself that enjoying food won’t “ruin” all my hard work, and that understanding my body from the inside out makes me unstoppable.