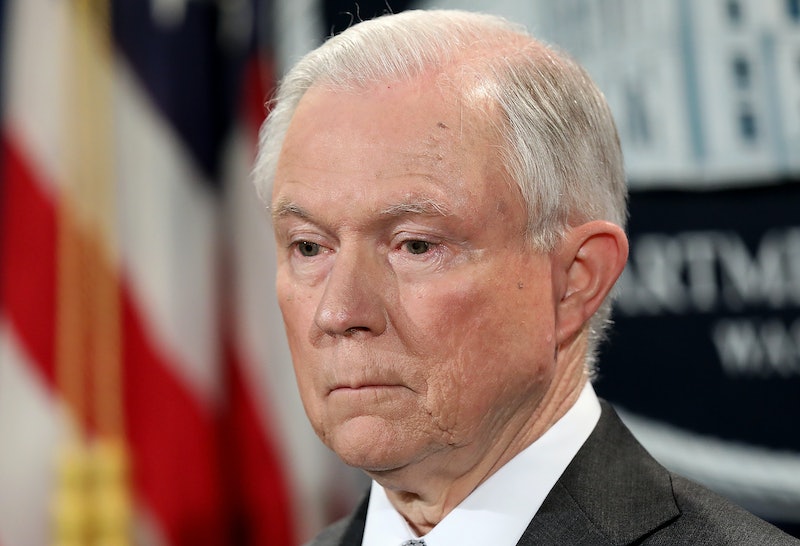 The Trump administration is in political free fall right now as Congress conducts hearings to demystify the various scandals that have plagued Donald Trump and his staff for the last year. Following James Comey's testimony last week, the Senate will forge on in its fact finding mission, with another intriguing administration official slated to appear next. Jeff Sessions will testify before the Senate Intelligence Committee on Tuesday, and his testimony could be the most explosive so far.

Sessions was originally scheduled to testify before the House and Senate subcommittees that oversee the budget for the Department of Justice. Now, Deputy Attorney General Rod Rosenstein will testify for those subcommittees in Sessions' place, while the AG testifies for the Senate Select Committee on Intelligence.

According to letters Sessions sent to the chairmen of the two subcommittees on appropriations, Sessions decided to appear before the Senate Select Committee on Intelligence because his testimony on appropriations was threatening to become all about the Trump/Russia scandal anyway.

"Some members [of the subcommittees] have publicly stated their intention to focus their questions on issues related to the investigation into Russian interference in the 2016 election, from which I have recused, and for which the deputy attorney general appointed a special counsel, " Sessions wrote. "The Senate intelligence committee is the most appropriate forum for such matters, as it has been conducting an investigation and has access to relevant, classified information," he added.

According to CNN, James Comey may have hinted in his closed door testimony last week that Sessions had further contact with Russian officials than he has previously admitted. Sessions is already in hot water for failing to disclose during his confirmation hearing that he had meetings with Russian ambassador Sergey Kislyak throughout the 2016 campaign. The attorney general has admitted that two meetings had occurred, but during questioning under oath on Tuesday, Sessions could reveal that there were more meetings.

The remaining question is whether or not Sessions' testimony will be made available to the public — there's been no announcement of whether any of this testimony will occur in an open hearing or if it will all take place behind closed doors. The hearing also hasn't been scheduled on the Senate's official calendar yet, so check back on their website in the next few days to find out what time it will be happening.