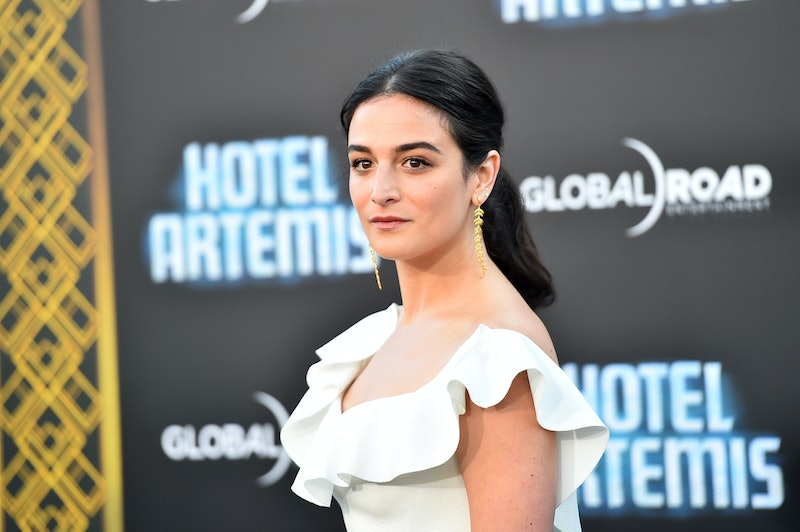 My interview with Jenny Slate at the Sundance Film Festival starts a little late, because like you and everyone else you know, the actor/filmmaker also uses her bathroom breaks to catch up on her emails. "There's a lot happening here!" Slate laughs, getting situated on a couch in a Park City suite a few minutes after calling out an apology from the bathroom door. There to promote The Sunlit Night, the independent romantic dramedy she stars in and produced, Slate is no stranger to the festival, which also premiered her previous projects Obvious Child and Landline. And though her open personality and slightly left of mainstream work may have you convinced that you know who Slate is, she herself is still figuring that out. One thing's for sure, however: she is really tired — like, exhausted — of being called "quirky."

"I don’t know how much of my business it is to care or think about how people want to define me," the actor says with conviction, when I ask her how she feels about the adjective. "I just think of myself as really multi-toned. I think there’s a lot going on inside of me at once, and I’m really alive, I’m really high energy. But the word 'quirky' to me, it always feels like, there’s something normal, but there’s, like, a few doo-dads coming off of it, and I don’t think of myself that way."

Whether it's the distinctive tone of her voice (which makes her ideal casting for animated series such as Bob's Burgers and Big Mouth) or her success in independent, female-driven character studies that prompts that classification, Slate, in person, hardly fits any definition of "quirky." Fresh off of our conversation about why taking your phone to the bathroom is just part of being a productive person, she delves seamlessly into the philosophical, unpacking her experience traveling to Norway to film The Sunlit Night, where her character, a painter named Frances, goes to get away from some relationship and family drama, taking an unpopular assistantship to a gruff artist. It was a transformative, spiritual experience for her that revealed that she "needed to change a lot about [her] life."

"I wasn’t there with a partner," Slate says. "I was part of the community, but I felt my aloneness, and I realized that I was living the life of someone who was still saving a strange amount of room in herself for a partner. And that that empty space was starting to like, really howl. Like, winds were starting to roll through there. And I played a woman who is alone and isn’t terrified by that ... I think this process revealed what I wanted to change in myself in order to fill the blank spaces with my own self-love."

We don't talk specifics about her dating life — though Slate was photographed with art curator Ben Shattuck during the festival — because what this is really about is the actor's relationship to herself. She tells me that she felt "powerful" and "proud" of herself making The Sunlit Night, happy in her collaborations and in being quite literally on top of the world, in Lapland. Frances doesn't know what she's getting into when she runs away to Norway, Slate says, but "her immersion into this astounding and completely unknown landscape is what starts to expose her more essential qualities." She adds, "I think when you have proof over and over again of how your personhood is made and what are the essential elements of that ... against a backdrop like Planet Earth, something that is both grand and you can’t question it, you really start to know who you are, and when you know who you are, you suffer less."

Slate relates to the creative and personal rut that Frances finds herself in. Because the painter isn't fumbling only because her career isn't going in the direction she wants or because of her recent breakup with a WASP-y boyfriend, but because she's lost sight of herself and her strengths.

"Sometimes I just get into a mode of seeing myself in a certain way, especially if I’m down on myself, and everything seems to be pointing to a more negative and heavy truth about who I am and what I’m able to do," Slate says. "And the essential truth about me, I think, that I’ve learned about myself, is that I have a good heart and I’m incredibly resilient and I am dangerously sensitive. Like, it’s a major liability." Her active imagination, such an asset in her work, can also be a liability, when it runs wild with her lower opinions of herself, the actor says. In those moments where she doesn't "see the good in [herself] at all," Slate tries to "get in touch with the natural world," something that ultimately jump-starts her Sunlit Night character, too.

There's a lot going on inside Jenny Slate, and her willingness to share such personal parts of herself with people she just met is the reason that a galley copy of Rebecca Dinerstein's The Sunlit Night novel ended up in her lap in the first place. She's not only the kind of person who'll easily tell a journalist how deeply lonely she felt making her last movie, she'll also give her home address over Twitter to a woman with whom she had a brief interaction in a Brooklyn park. (Dinerstein gave Slate "a silent round of applause," Slate, who was on the phone with her mom, "blew her a kiss.")

Slate could not be more sincere when discussing how she approaches her art — there's no skating by on whimsy. It's frustrating then, that her work is boxed in by terms like "aggressively cute" and "twee." Frances, Slate points out, is an observer — she's the calm center of the movie. The Sunlit Night's more offbeat elements come from other characters, like Zach Galifianakis' Viking reenactor or Gillian Anderson's sexy Russian divorcée. But still, those descriptors follow Slate around.

"These [words] feel derogatory at this point and they feel like they’re words said by men to say like, you’re not serious enough, for some reason. The scope of your emotions, we’re gonna infantilize it, and we’re gonna say that you’re like an annoying live doll to us. Or an acceptable live doll,'" Slate muses. "But either way, somehow the womanhood is extracted, or somehow the adulthood is extracted. And yeah, I don’t know, I don’t play that game. I don’t respect it. And I think it’s lazy."

Slate may not play the game, but she knows the rules. And she'll continue to push against sexist subtext of these "harmless" words, for every other woman who's ever felt minimized by them.

More like this
On 'The Handmaid’s Tale,' Christine Ko Fights Back
By Gretchen Smail
Jinkx Monsoon Is About To Get Real Sketchy
By Sam Ramsden
Lin-Manuel Miranda & Tituss Burgess React To 'Little Mermaid' Casting Backlash
By Radhika Menon
An Extremely Messy Ranking Of What Actually Happens In 'Don't Worry Darling'
By Chloe Foussianes
Get Even More From Bustle — Sign Up For The Newsletter