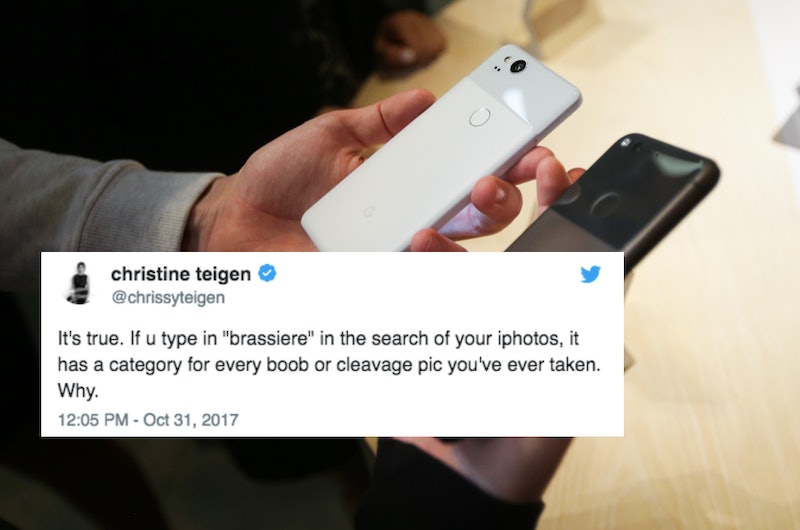 People who wear bras got a fun (if "fun" means "vaguely horrifying") pre-Halloween surprise: Apple's iOS automatically sorts pictures featuring bras into a folder called "brassiere." But "brassiere" isn't the only keyword iOS uses to sort your photos. In fact, there are almost 4,500 searchable keywords to find photos on your iPhone and other Apple devices running iOS 10 or newer.

Twitter user @ellieeewbu was the first to point out the "brassiere" tag on Oct. 30, but it turns out the function has been in place for more than a year. Developer Kenny Yin outlined the changes to the Photos app when it was updated in June 2016, and those changes include the ability to recognize "thousands of objects, scenes, and facial expressions," Yin wrote. Photos can also recognize seven distinct facial expressions: Greed, disgust, screaming, smiling, surprise, suspicion, and neutral.

So while discovering your iPhone is able to bring up every cute bra selfie you've taken can be disconcerting, your iOS hasn't been designed to perv on you. (It's worth noting, however, that Fader pointed out there don't appear to be equivalent tags for things traditionally associated with men, like "boxers.")

This new discovery may have you wondering what other objects your Apple device is capable of recognizing, and the answer is: A lot. Some of which is mundane, and some of which is totally out there.

A few of iOS's search-capable keywords — gathered from a list compiled by Yin — are both expected and gifts to the internet: "Cat," "dog," and "animal" are all searchable, making it easy to scrounge up every picture you've ever taken of your cat, your friend's dog, and that squirrel you saw eating pizza in a trash can. Also searchable are useful terms normal people might need on a regular basis, like "house," "car," and "cheeseburger."

Why you would need most of those is a mystery, but at least if you did find yourself in a surprise pop-up contest somewhere, you could whip out your iPhone to quickly show off your various squeezebox photos and win...whatever it is you'd win for that.

All joking aside, being able to quickly search your photos is honestly pretty useful. According to TechCrunch, who wrote about Apple's improved Photos app back in June 2016, "[iOS] can recognize faces in your photos and group by person, but it also has advanced object recognition, making it possible to find images of any number of different things from your distant past."

So squeezebox searches may be funny, but Photos can also find things like "computer monitor," which would be handy if you needed to prove your monitor was damaged on a certain date by someone else, as well as event tags like "graduation" and "commencement," helpful for those who, like me, hardly ever dump their photos from their iPhone into their laptop and then have a hopeless mess of 10,000 pictures to sort through.

With advancements in technology have come countless privacy concerns, from hackers hijacking laptop webcams to surveillance via smartphone. But if you're worried about people being able to see how many photos you have of yourself in a bra, you can rest a little easier. As TechCrunch reported, "The computer vision tech used by Apple runs natively on your iPhone or iPad, meaning that it doesn’t require you to upload all the images to the cloud."

And feelings about the fact that there aren't "brassiere"-equivalent tags for underthings things traditionally worn by men can only be summed up in one perfect meme: Disappointed, but not surprised.