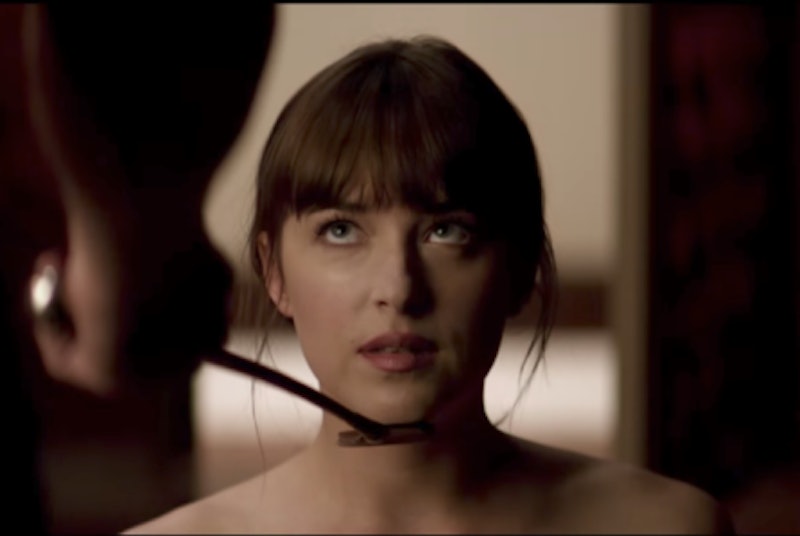 One of the more memorable moments in Fifty Shades Darker involved a tube of lipstick gliding across Jamie Dornan's perfectly chiseled chest, with Dakota Johnson, playing submissive/love interest Anastasia Steele, "connecting the dots" of her boyfriend's scars. While not as physically intense as that movie, the final film in the series has some memorable makeup moments all its own. And the lipstick that Ana wears in Fifty Shades Freed will definitely make you swoon, and reflect the woman she's grown into over the course of the series.

When the series began with Fifty Shades of Grey, Ana wore mostly pink-toned near-neutrals, perfectly reflecting her naïve newcomer status, and highlighting her constant blushing. Fifty Shades Darker focused on more intense colors as Ana dove into Christian's world of dominance and submission. Makeup designer Evelyne Noraz shared the actual lipsticks used for the film in an Instagram post, with the film's most iconic look, Ana entering the masquerade, breaking down to two colors: Glossier Generation G Jam lip stain, which was actually applied by Ana in-movie, and Anastasia liquid lipstick in Heathers for close-ups and kissing scenes. Described respectively as "deep berry Magenta" and "brownish oxblood", these aren't colors for the faint of heart.

A big difference between the book and film version of Fifty Shades Freed is the latter starts with the now-married couple returning from their honeymoon, while the film opens big with a lavish wedding scene. It's one of the film's main draws; the wedding dress was even part of the film's promotion. It's here we get our first glimpse of the new Anastasia, wearing no more girlish pinks or deep vampy reds. Instead, she sports a gorgeous matte neutral lip, reflecting her newfound step into a permanent, adult relationship.

The light mauve tone doesn't need to call attention to itself — it's just there and looks perfect. Bustle reached out to Anastasia of Beverly Hills, and while they confirmed their Liquid Lipstick shade in Heathers was used in Darker, the specific color from Freed wasn't mentioned. But another color from the Liquid Lipstick line, Crush, looks strikingly similar to Ana's wedding lips. Described as a "soft beige", the color enhances without distracting from the star of the show — that dress.

Similarly, Ana's all-white honeymoon power suit look is complemented by a darker, flat lip; the sexiness of a deeper color without the high drama of a bold red. While MAC Cosmetic representatives haven't gotten back to Bustle, their Retro Matte Liquid Lip color Feels So Grand was a standout in Darker and it would make sense to go back to the brand for Freed. The rich "greyed plum" of So Me seems nearly identical, and if not the real deal would make for an excellent dupe.

Even the berry shades Ana now sports are more muted. In an all-gals dress shopping scene, Ana slips into a slinky silver number, which makes her neutral berry shade pop all the more. MAC's Matte Lipsticks aren't flat as their liquid counterparts, giving the slight sheen we see on Ana in the dress store. Their color D For Danger isn't just a visual match, but perfectly on-theme for the film, as Ana is constantly being watched by guards there to protect her from a vengeful ex-boss.

While it's highly unlikely any of us are going to get to hop into a helicopter and spend months lolling around Europe come Valentine's Day a la the newly minted Mrs. Gray, Ana's lip looks are much more easily in reach. In just a few clicks of the keyboard or stepping into a store, we too can capture at least a little bit of the glamour of Fifty Shades Freed.