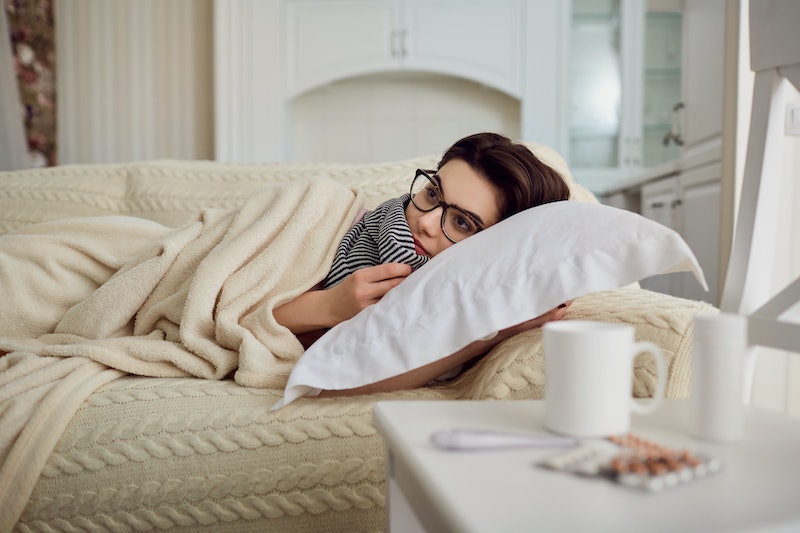 You’ve probably heard about the gut microbiome, and how important it is for a healthy body, right? Well, as a turns out, your nose has a microbiome, too — and it might play a key role in how well you fight off colds. According to a new study from the University of Virginia published in the journal Scientific Reports, bacteria living inside your nose can seriously affect your sniffles. Yes, really. As if that weren’t weird enough, researchers further found that study participants’ noses fell into six different nasal microbiome subtypes. These nasal microbiome types are linked to how bad your cold symptoms get, and how well you fight the virus off in the first place.

According to a recent press release on the study, your nose is teeming with tiny microorganisms that correlate with both the type of colds you’re vulnerable to, and how severe your symptoms are when you do get hooked by a virus. Researchers found that the bacteria found inside study participants’ nasal microbiome types were linked to how much cold virus was found inside the body, and how cold symptoms manifested person to person.

Study author Dr. Ronald B. Turner, MD, of the University of Virginia School of Medicine was quoted in the press release as saying that “The first surprise was that you can identify these different buckets that people kind of fit into, and the fact that the buckets seem to have some impact on how you respond to the virus and how sick you get … the background microbiome, the background bacterial pattern in your nose, had influences on the way that you reacted to the virus and how sick you got.”

Per US News & World Reports, even when people had the exact same cold virus strain, those with higher levels of the bacteria Staphylococcus had more severe nasal symptoms than those with less of it did. It’s further noted in the press release that genes might play a role in both the composition of your nasal microbiome, and how bad your cold symptoms get.

It’s also noted in the press release that researchers gave study participants liquid oral probiotics — beneficial bacteria — to see if they altered the makeup of the nasal microbiome while helping to relieve cold symptoms, but the supplements didn’t make much difference. It is possible, however, that a probiotic nasal spray would have more impact.

Researchers also said that more studies are needed to further understand all the factors that contribute to how a person’s body reacts to a cold virus, according to US News & World Report. “What we’re reporting is an association, so it’s entirely possible that the fact that you have staph in your nose and you have more symptoms is not directly related,” Dr. Turner further explained. “Whether there are environmental characteristics that also influence it — whether you’re exposed to pollution or whether you’re allergic, or whether any number of things might impact it — I don’t know.”

So, if you lean towards the more severe end of the spectrum when it comes to cold symptoms every year, it might be because of your nasal microbiome. And while the nasal microbiome findings are definitely interesting — if just a little bit strange — more studies are needed to both further understand the study’s findings, while maybe also devising ways to better relieve cold symptoms for those hit the hardest by the virus.