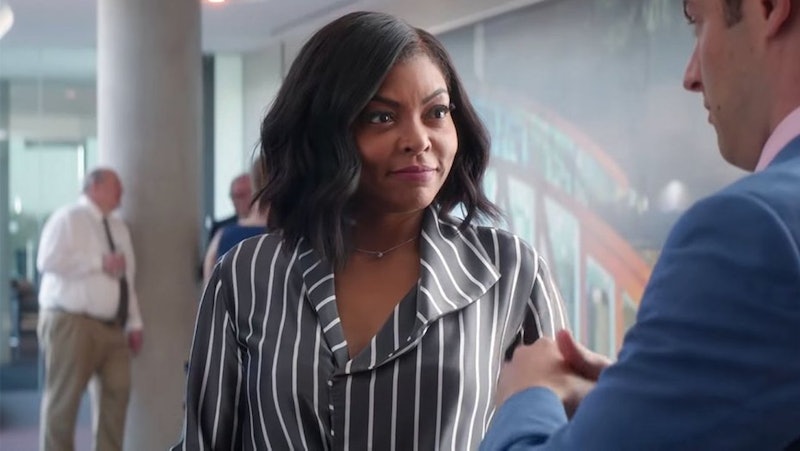 What Men Want isn't a new idea. In 2000, Mel Gibson found out What Women Want, and the new film, starring Taraji P. Henson, is a remake that swaps the genders. But it's not as simple as Henson playing the same character Gibson did, because her being a black woman, as opposed to a white man, changes everything. And for What Men Want director Adam Shankman it was important to address that head on.

"I would never have made this movie without addressing [racism and sexism] at some point," Shankman tells me the day before the film's Feb. 8 release. "That, to me, would really not have made sense. So I just wanted to make sure that the audience is aware that we're aware that this is for real."

In the movie, the most blatant scene about discrimination occurs at Ali's (Henson) workplace, a sports management agency where she's one of the few female employees, and on a mission to be made a partner after repeatedly being passed over. When Ali's boss hints that he can't fire her, she says it's because she's a woman, but he says, "No, not just that." To that, Ali replies, "I am not your twofer."

"That seemed like the most appropriate scene to specifically go like, OK, this is sort of the elephant in the room and we should probably address this," Shankman says. He notes, though, that issues relating to race and gender are part of the entire film. "[Ali] also says to her father in the boxing ring in the beginning of the movie, 'How am I supposed to succeed in a system that's rigged against me?' So the awareness is laced through the whole movie."

In the original movie, Gibson's character, Nick, is a chauvinist who is made to learn about himself by hearing women's thoughts. In the remake, Ali does discover things about herself, especially when it comes to dating, but more than that, she learns what men think of her being in such a male-dominated field.

In addition to the two films mentioned above, Shankman is known for directing A Walk to Remember and The Wedding Planner, as well as his choreography work and judging on So You Think You Can Dance. Those projects are all very different, but according to Shankman, there is a purposeful theme to his career.

"Something that is important to me is fundamental optimism in the work," he explains. "Whether it's a love of family, human spirit, triumph of the human spirit ... a fundamental sense of joy in there."

Shankman says that he wanted to make What Men Want because of the opportunity to work with Henson, an actor he's long admired. When they worked together on developing Ali, he sent her a piece of music that he felt embodied the character, and she totally got it.

"It was a very compulsive big band swing version of 'Sing, Sing, Sing'", Shankman says, adding, "The other thing I said to her was, 'On day one and day two, as we're finding this thing and this rhythm, I'm probably going to know who [Ali] is a little bit better than you, because I have a picture in my head. By day three you're going to know who she is and I'm going to be drafting in behind you ... because you will now have completely found your rhythm and will be inhabiting who this woman is and this movie is about this woman. And that is exactly what happened. It was great."

The director doesn't have another movie in mind that he'd like to see gender-flipped in the same way What Men Want one is, but he does say that he "would like to see women play every kind of character. And women of color playing every kind of character." His films in particular, he adds, don't have "boundaries for women in terms of what they can or should be playing."

What Men Want may be based on a straightforward idea, but putting a black woman in the lead role makes it far more complex. "This movie is so simple," Shankman says. "It is so, so very simple. It's complicated because of the optics of it." And, to think, that's all because of the screwed up, anything but simple world we live in.