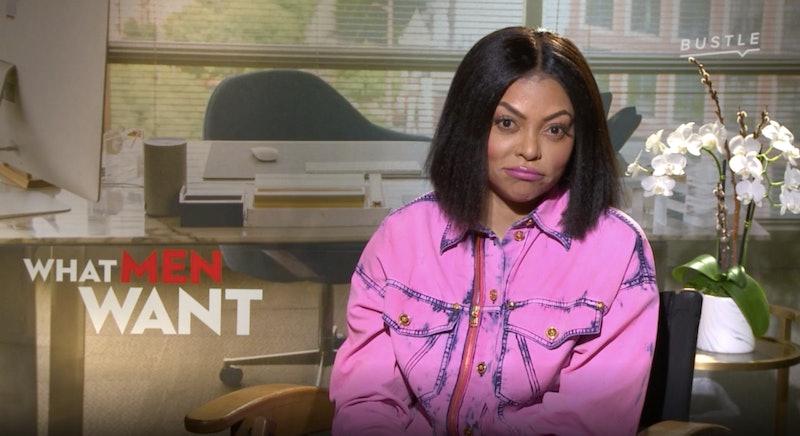 Every rom-com fan probably remembers Mel Gibson’s 2000 flick What Women Want, where his character Nick gains the power of hearing women’s thoughts, thereby learning to understand the women in his life better. Nearly two decades later, Taraji P. Henson is starring in What Men Want, out Feb. 8, an updated version loosely based on the original rom-com, but with the gender roles reversed and a different kind of office culture to Nick's advertising agency.

In this new version, Henson plays Ali, a sports agent who doesn’t feel respected by her male colleagues and is passed up for a promotion in favor of a man. After questioning what it takes to thrive in a male-dominated industry, she drinks a mysterious potion given by a shaman, giving her the ability to hear men’s thoughts. Ali decides to use this to her advantage but finds some challenges along the way. Given how the film focuses on a cutthroat office environment, we thought it'd be the perfect opportunity to ask the cast to imagine what they would do if they had to deal with some common office annoyances.

At the movie’s Los Angeles press junket, Bustle Associate Entertainment Editor Mallory Cara asked the cast what they would do in hypothetical workplace situations, from the mundane to the ridiculous, and the responses are outrageously funny.

Some answers from Tracy Morgan, who plays Dolla in the flick, will remind you of his uncouth 30 Rock character, especially when he's asked what he would do if the bathroom were full and he really had to go. And what till you hear what he'd do if he got too drunk at any office party.

But Morgan's not the only one who'd have some shocking ways of handling their coworkers. Erykah Badu, who plays Sister, also has quite an unconventional solution to the bathroom situation. And director Adam Shankman has the perfect solution to the embarrassing situation of accidentally calling his boss “Mom” or “Dad.”

And much like their characters in the flick, Tamala Jones and Henson had some savvy solutions to workplace issues. Henson has no qualms confronting co-workers about stolen office supplies, while Jones has a witty idea for catching a lunch-stealer in the act.

In an interview with Screen Rant, Henson talked about what a thrill it is for her to be part of a remake of one of her all-time favorite rom-coms, especially in how it deals with gender politics in the workplace. “The fact that I was thought of when they decided to do the reverse of the story was pretty honoring," she said. And she revealed that though this is her first rom-com, she’s thrilled to have the opportunity to show off her comedy chops a little more.

“I studied musical theater, so I think I know comedy. Actually, I really went to Hollywood with hopes of getting on a half-hour comedy show,” explained the actor. “Being a single mother, that would have been the schedule that best helped me, but here I was getting all these dramatic, one-hour shows. But, y’know, if you watch my work, I try to put funny in everything 'cause such is life. You laugh one minute, you're crying the next.”

Leave it to the movie to get unexpectedly deep. Watching the What Men Want cast solve your office problems may leave you in tears, but not those kind of tears.