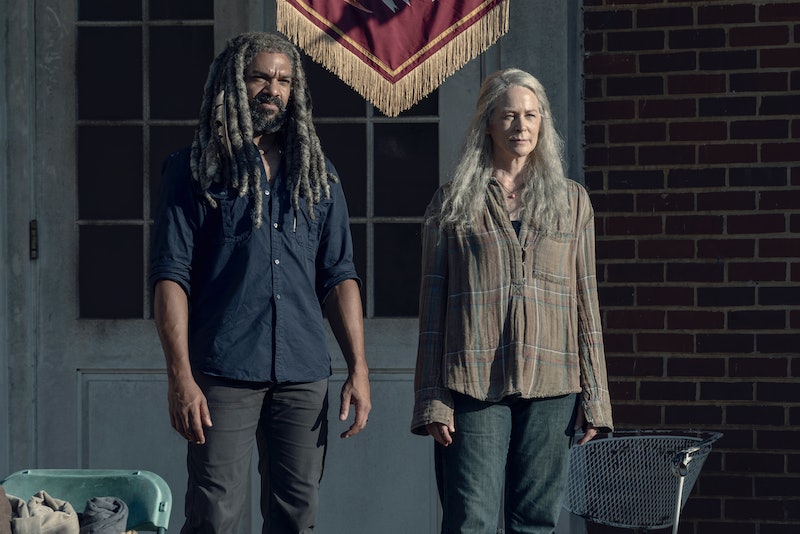 The festival on The Walking Dead is fast approaching, and one aspect in particular has all of the communities buzzing: a movie. Even Carol seems excited to show some of the younger survivors their first ever moving picture. But what movie is The Kingdom planning to screen at thisWalking Dead fair? After teasing this cinematheque, we better see at least part of it before the Whisperers inevitable attack. I mean, they were even able to convince the blood thirsty Highwaymen to chill out with the mere mention of a flick. It better be a good one.

They haven't actually stated what movie the Kingdom is planning on showing. Carol alluded to the Kingdom having movie nights in the past, when Henry was younger, but didn't get into any titles or genres. The fact that they salvaged a projector and a bulb at all is impressive.

They Kingdom is really a high school compound, which means there are likely quite a few movies laying around. But what? Legal copyrights may not exist in the apocalypse, but they do in our world — so the choices are somewhat limited. It probably shouldn't also star any of The Walking Dead cast members past and/or present. So that rules out Love Actually, unfortunately, as well as Minority Report and The Boondock Saints.

One would think this film is family friendly, even though the kids and teenagers on The Walking Dead are not really living a PG or even PG-13 life. Would the Marx Brothers, or a mainstream comedy even work on them? Do they know how to laugh? Here are some guesses as to what The Walking Dead will program in the spirit of togetherness.

Before AMC started producing prestige original content, it was a channel we'd tune to for classics. In a way, this could be a fun homage to the network's roots. Plus, a black and white movie would be visually evocative, and half of the characters on The Walking Dead act like they're in a Western anyway.

What about it? Daryl named his dog "Dog," and I think it would be funny if the show pointed out that he's basically the same as Holly Golightly, who named her cat "Cat."

The Wizard Of Oz

It's a classic. Some kids love it, and some kids are scared of it. It also gives The Walking Dead a chance to make some juicy allusions, and compare the survivors to Dorothy's companions.

Night Of The Living Dead

Here's a wacky idea... are they going to watch a zombie movie? Do zombie movies exist in the world of The Walking Dead? Surely, if they did, we'd have to go back and retroactively wonder how it took the survivors so long to figure out what they were dealing with — right?

They could watch other horror/cult subgenres instead, like the original Little Shop Of Horrors, Phantom of the Opera, or Dracula.

A Star Is Born

No, not the "Shallow" one. While Jackson Maine's accent in the 2018 is basically a Norman Reedus impression, I'm talking about the 1937 public domain A Star Is Born with Janet Gaynor.

AMC does retain the licensing rights for Warner Brothers, and if the film they watch ends up being animated, bet on Bugs.

Fast forwarding a few decades, who among us didn't watch October Sky in science class when the teacher was "planning" (hungover) and needed a break?

See above, but with social studies. There's also other '00s classroom classics like A Walk To Remember, The Patriot, and Stand by Me that could have survived the outbreak.

What if that's all Carol and Ezekiel have? They're in a school, after all. Maybe the scariest form of entertainment they can find is about our changing bodies — no zombie pun intended.

As I would have said, dramatically, in high school: the horror. Now, are they able to get some butter for the popcorn?