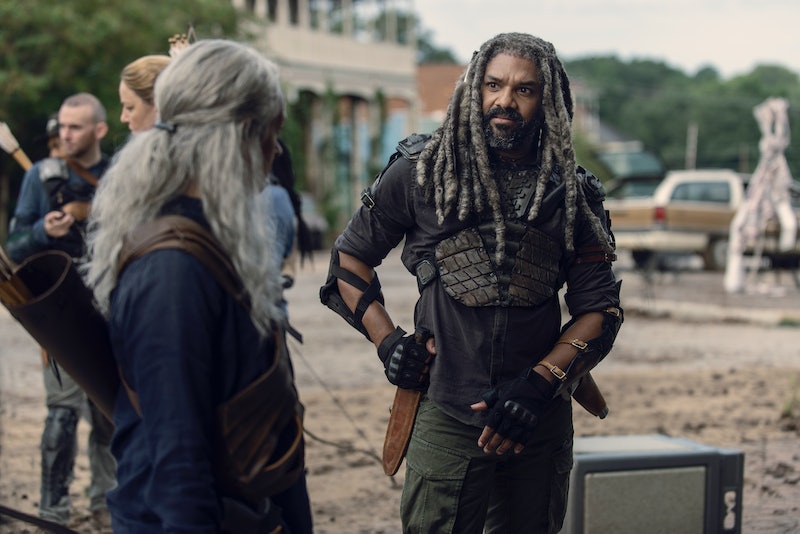 While Daryl was meeting Alpha for the first time on The Walking Dead this week, the Kingdom was working towards something that would unite survivors rather than divide them. And seeing The Walking Dead charter laid out like that was a sad reminder of all the hope the survivors still have — and that Alpha and the Whisperers might be about to take it all away.

The episode began with a flashback to when Jesus was alive, Maggie was still at the Hilltop, and Carol was just beginning to grow out her hair. In the flashback, while trading supplies, Tara tells Carol, Jerry, and Ezekiel that she's leaving Alexandria for the Hilltop — where, as we know, she ultimately ends up as leader in Season 9.

Tara then handed over an unsigned treaty to Zeke. "Michonne was letting it collect dust," she said. Jesus added that Maggie was not a fan of Michonne at the moment, alluding to whatever it is the writers are teasing about what happened with them. Therefore, the Kingdom's leaders are tasked with holding this important document, called the "Multi-Community Charter of Rights & Freedoms." Looking over the treaty in the flashback we see spaces for Alexandria, the Kingdom, and Oceanside to sign it. Later, when the scene flashes forward to Ezekiel still holding an unsigned charter in the present timeline, you can spot spaces for the Hilltop and the Sanctuary as well.

There are many articles for various laws and agreements. There's even a preamble:

"Any person who would live in peace and fairness, who would find common ground, this world is yours by right. We stand together for life, not death, in this new world. Together we make this world bigger. The future is ours so long as we hold onto our faith in one another with everything [unclear]. To consecrate our bond, we establish this Multi-Community Charter of Rights & Freedoms."

"I haven't given up on the idea this embodies," Ezekiel says to Tara and Jesus. "I still believe that this will bind us into something more. That we are family. When the time comes, we'll reunite. The leaders will sign it together. The other communities will begin anew again as one. Until that day, I am honored to be the keeper of the path forward." Oh, Ezekiel, dramatic and extra as always.

That sentiment echoes throughout the episode. The three communities are gearing up in the present timeline for a peaceful celebration that will unite all of their people. The Kingdom is bent on providing entertainment and laughter (read: movie night!), not just food and togetherness.

Is the treaty going to be signed at the festival that these communities are planning? Michonne is still leading Alexandria, and we haven't checked in with Oceanside in a minute, but with Ezekiel and Tara at the helm of the other two communities, this could actually happen. It certainly seems to be what the episode is alluding to; however, with the Whisperers looming about... these communities of survivors may find themselves united over a common enemy (again) rather than the democratic process.