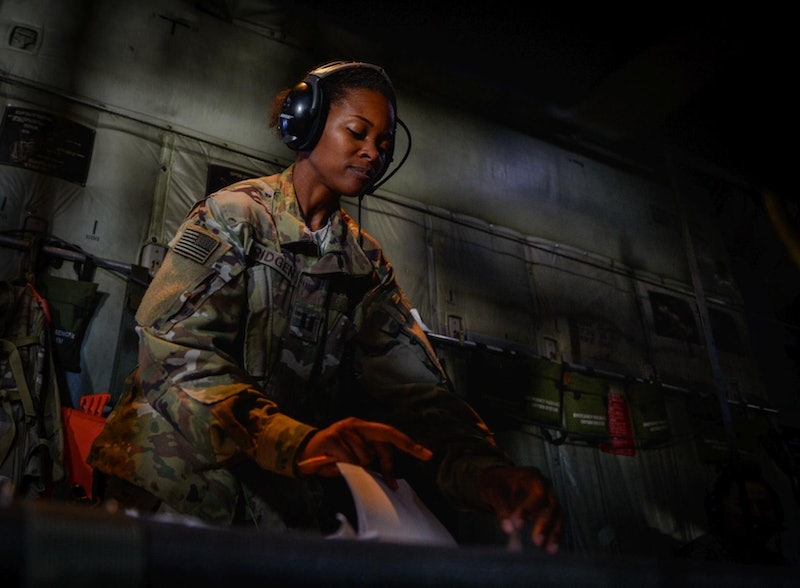 Courtesy of the U.S. Air Force

When you think about a career in the Air Force, it's easy to picture non-stop action and a sense of adventure that rivals the latest blockbuster to hit theaters. But when it comes to real life enlistment, how likely is that stuff to actually become part of your day-to-day? I had the same question when I first heard about Air Force Captain Erica Pridgen.

Reading Captain Pridgen’s professional bio, I was fascinated to learn that she’d not only been deployed all over the world to provide life-saving medical assistance — including to Japan, New Zealand, and Afghanistan — but that she’d also been selected for a special team to serve somewhere most humans will never lay eyes on in their lifetime — the continent of Antarctica.

Now an Aeromedical Evacuation Contingency Planner, Captain Pridgen spent years as a flight nurse, providing en-route medical care aboard fixed-wing aircrafts. Her main duties included transporting wounded warriors as they returned home from combat deployments, where she logged more than 400 flight hours. Pridgen has deployed twice to Afghanistan, where her team was responsible for providing medical evacuation support for more than 13,000 U.S. and NATO troops.

Her new role allows her to focus on coordinating aircraft transport, planning the missions, and working to ensure patients get to where they need to go safely and efficiently.

Through Bustle’s partnership with the U.S. Air Force, we got to speak with Pridgen about her incredible experience, and along the way we learned about some cool lesser-known opportunities that the service provides.

Here are some lessons she shared.

1. Every Adventure Starts With A Strong Foundation

When Captain Pridgen imagined becoming a flight nurse, she anticipated providing emergency medical assistance in the back of a high-speed aircraft flying somewhere over the ocean. While this action-packed experience did come eventually, Pridgen was humbled to learn that before such excitement can begin, all service members have to build a foundation of basic training.

“My first duty station was on a same-day surgery floor,” Pridgen recalls. “I loved it, but in my head, I thought I was going to be in the back of a plane taking care of patients. I kept asking, how do I get to what the recruiter was telling me about? It was a little naive of me.” But once Pridgen completed the Air Force Nurse Transition Program, she was ready to take flight.

2. Staying Nimble Means Being Ready For Anything

While Captain Pridgen does appreciate the much-needed down time between deployments, she quickly learned the value of being quick to adapt to new assignments, and staying open to the adventures that lie ahead.

“I've deployed in positions where we ‘sit alert,’ which means when they call you, you have an hour to show up, and you have three hours total to get the plane off the ground and fly wherever that patient needs to be picked up from,” Pridgen explains. “That’s the majority of what we do as flight nurses. We fly all over the world at a moment's notice."

3. Your Work Could Take You To Places You Can Only Imagine

When we asked Captain Pridgen about her most exciting experiences in the Air Force, her response did not disappoint. Pridgen told us about her once-in-a-lifetime deployment to McMurdo Station in Antarctica.

“We geared up out of Christchurch, New Zealand, and they gave us all our cold weather gear and flew us down to McMurdo Station,” Pridgen says. “There were about 900 people on the continent of Antarctica. Only 100 are military; most of the people are civilians, scientists, and those supporting the National Science Foundation. I worked in the clinic and if a patient was sick and needed to be transported to a larger facility, we would hop on the plane and fly them to New Zealand.”

While Pridgen credits Air Force leadership for giving her and her fellow service members plenty of much-needed time to recover, she also emphasizes that the scope of her travels takes the edge off of the long hours and unrelentingly hard work.

“Leadership understands how much they ask of us and they really try to create harmony and balance,” Pridgen says. “But I'm here to serve and give my all. And even when we're deployed, we get to go to places that other people never get to go — places I never would have been able to go if it wasn't for the Air Force. So, even though we're working, there's always these little glimmers of light that make it all worth it.”

5. Ask Questions, And Learn To Love The Learning Curve

When we asked Pridgen if there’s anything she wishes she’d known before she joined the Air Force, she hesitated at first, and then declared, “I know this may sound kind of cheesy, but I'm going to say no. Because all the hard lessons, embarrassments, and things that I went through were very necessary for growth. That's gotten me to where I am today.”

This post is sponsored by the U.S. Air Force.

More like this
6 Organizations Fighting Police Brutality That You Can Support Right Now
By Syeda Khaula Saad and JR Thorpe
24 History-Making Black Women You Probably Didn't Learn About In School
By Ayana Lage and JR Thorpe
25 Inspiring Quotes From Black Women To Celebrate Black History Month
By Kyli Rodriguez-Cayro and JR Thorpe
Eurovision Has Been Given A Whole New Look Ahead Of Its Liverpool Debut
By Bustle UK
Get Even More From Bustle — Sign Up For The Newsletter
From hair trends to relationship advice, our daily newsletter has everything you need to sound like a person who’s on TikTok, even if you aren’t.