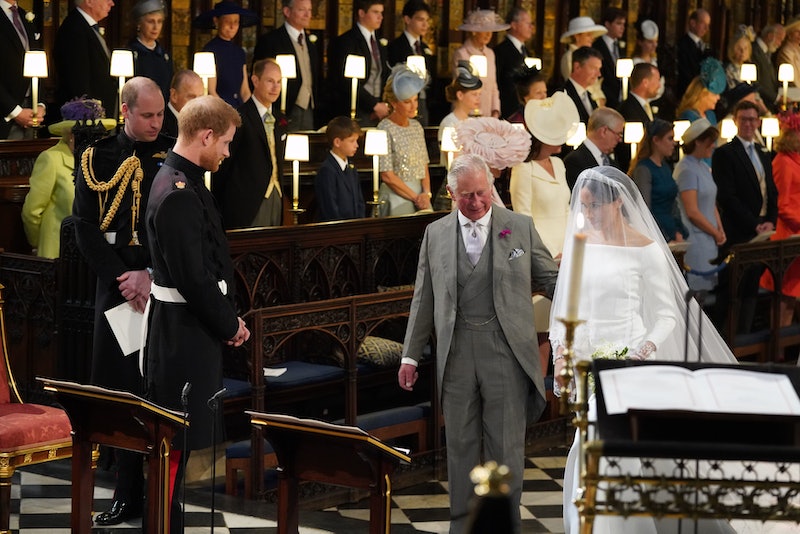 Back in May when it was announced that Prince Charles would walk Meghan Markle to Prince Harry waiting at the altar at their wedding, it was a relief to anyone who had been following the lead-up to the ceremony. Markle's dad, Thomas, had gone back and forth on whether he would be at the wedding, updating TMZ all along the way. And while we can think and feel one thing looking in from the outside, Harry has now shared more information about the decision, as well as what he told his own dad during the wedding.

According to People, in the new documentary Prince, Son and Heir: Charles at 70, which is in honor of the Prince of Wales' 70th birthday on November 14, Harry talks about asking Charles to escort Markle at the wedding. "I asked him to and I think he knew it was coming and he immediately said, 'Yes, of course, I’ll do whatever Meghan needs and I’m here to support you,'" Harry said. "For him that’s a fantastic opportunity to step up and be that support, and you know he’s our father so of course he’s gonna be there for us."

Harry also said that when Charles and Markle arrived at the altar, he said, "Thank you, pa." Harry explained, "You’ve gotta say thank you. Just because he’s my father that doesn’t mean I can just sort of go, 'Okay, that’s all, I’ll take it from here.'"

Charles' wife, Camilla, Duchess of Cornwall (who was apparently a big hit in the documentary, according to the Daily Mail), said of the moment, "I think that was very touching, sitting where I was, you couldn’t hear what he said. But afterwards watching it on the television, I... I think it was a very... it was a lovely gesture."

As much as some Harry and Markle fans probably wish it was, the documentary is about more than just details from the wedding. For the BBC One doc, which aired on Thursday night, Charles was followed for a year at home and at work, including during trips abroad. In addition to Harry and Camilla, Prince William was also interviewed.

In advance of Charles' 70th birthday, he's been in the press quite a bit. In addition to the documentary, there was a big cover story in Vanity Fair, and he and Camilla have also been making headlines because of their visit to Nigeria, Ghana, and the Gambia. Charles' duties have been ramping up, and all of these have been opportunities for the public to get to know him better, and for him to share his side on some issues.

For instance, in the documentary Charles explained that he won't continue on the same way as King as he has as Prince of Wales, as reported by the BBC. "The idea, somehow, that I'm going to go on in exactly the same way, if I have to succeed, is complete nonsense because the two — the two situations — are completely different," he said." In response to the idea that he's "meddled" in government and political issues over the years, he said he viewed his actions as "motivating". "If it's meddling to worry about the inner cities as I did 40 years ago, then if that's meddling I'm proud of it," he added.

The documentary also featured a new photo of Charles with his newest grandchild, Prince Louis.

Prince Charles' move to even more of the spotlight doesn't seem to be slowing down right now, but those who want more Harry and Markle info rather than Prince of Wales info will surely get just that, too. They have a baby on the way, and it looks like everyone is still more than willing to talk about that wedding.