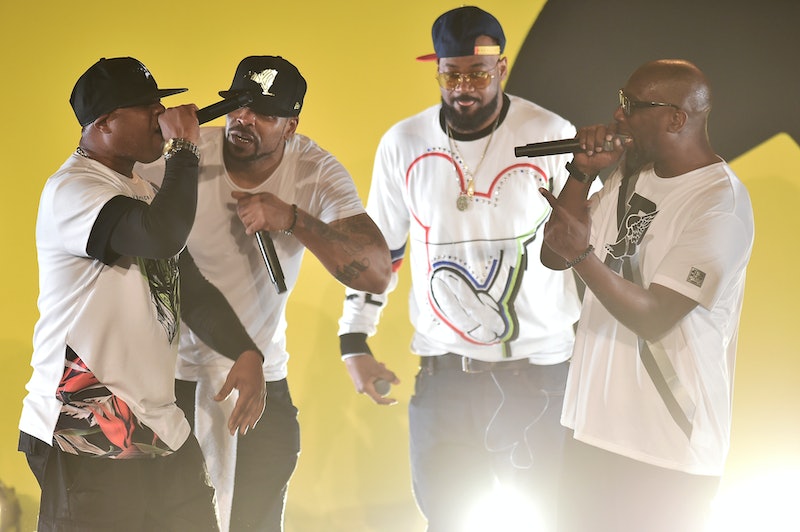 The Wu-Tang Clan is one of the most dominant, innovative, and iconic collectives in rap history who changed the game as one of the first hip hop acts establish the idea that lyricists could be full-blown moguls with a clothing line, dolls, video games, movies, and documentaries. So, it's no surprise that Showtime is detailing their origin story in Wu-Tang Clan: Of Mics and Men, a four-part documentary premiering on May 10. The series also touches on aspects of the group's history that some fans may not be familiar with, such as how the Five Percent Nation influenced the Wu Tang Clan and their peers.

Per NPR, the Five Percent Nation was formed in 1963 by Clarence 13X, a former student of Malcolm X who decided to split from the Nation of Islam because he didn’t agree with their views on God. The name of the group (also known as the Nation of Gods and Earths) refers to the thought that 10% of the world knows the truth about life and they keep 85% of people in ignorance, so it’s up to the remaining Five Percenters to enlighten others. Clarence 13X believed that Black men were God and could tap into their inner godliness with intense meditation as well as acquiring knowledge through systems like “Supreme Mathematics” and “Supreme Alphabet,” which attach a deeper meaning to the English letter and number system in order to bring enlightenment.

According to New York Amsterdam News, Clarence 13X changed his name to Allah the Father and spread his beliefs to disadvantaged Black youth in Harlem during a time of intense racial attacks. His message of Black empowerment and godliness resonated with people long after his murder in 1969.

The aforementioned NPR article also said the group operates on several tenets that proclaim Black people are Earth’s original people, Islam is a way of life (not a religion), education leads to self-sufficiency, and the black family is vital to building the nation. And, Five Percenters were encouraged to take care of themselves mentally and physically as well as dedicate their lives to activism.

In the Mics and Men documentary, several Wu-Tang members spoke up about how they directly encountered racial slurs, physical assault, and death threats as children in their hometown of Staten Island, NY, which RZA referred to as a "mini Mississippi" in terms of race relations. RZA said the Five Percent Nation was a medium that gave Black men and women a sense of self-worth, hope, pride, and unity in a segregated and overtly racist city where most Black people lived in poverty.

“Being a part of the Five Percent at that time, the mathematics and the knowledge itself…brothers was very unified,” said RZA. “We all can say that we was totally converted into that, totally immersed into it.” RZA revealed that his cousin and fellow Wu-Tang member GZA, who went by Allah Justice at that time, enlightened him about the Five Percent Nation.

RZA also believed the Five Percent teachings shaped the group’s perception of themselves and made them want to take on a responsibility to be better people. Wu-Tang Clan’s early rhymes were heavily laced with references to the Asiatic Black man being the father of civilization and Supreme knowledge as well as catchphrases from the Five Percent Nation like “word is bond,” “the bomb,” “peace,” and “G,” which originally stood for God instead of gangsta.

A 2007 commercial for the Five Percenter book In the Name of Allah: A History of Clarence 13X and the Five Percenters featured Wu-Tang members Inspectah Deck, GZA, and Method Man in promotional clips. Method Man, who is famously quiet about pretty much everything in comparison to his groupmates, gives his thoughts about the nation. “This [is] true life right here,” he says while holding the book. “All y’all talkin’ about keeping it real and all that. Ain’t nothing realer than The Father, aight?” He signs off by wishing “peace to the Gods” and encourages people to pick up the book.

The Five Percenters influence was widespread in 80’s and 90’s hip-hop culture – which isn’t surprising considering that the genre was dominated by young Black rappers who were establishing their sense of identity and self-worth. Legendary rappers like Rakim, Busta Rhymes, Public Enemy, Mos Def, Nas, Jay-Z, Jay Electronica, and Brand Nubians often used the nation’s teaching in their rhymes and even donned the Five Percent Nation's 7 and a crescent symbol on clothing.

Soul singer Erykah Badu, who named her son Seven in honor of the number’s divinity, has heavily referenced the nation’s teachings in songs like “On & On.” And, a renewed interest in the group was sparked in 2014 after Jay-Z wore the Five Percent symbol on his chain, per Hollywood Life.

The Five Percent Nation’s influence on later generations of mainstream rappers isn’t as powerful, but the group is undeniably woven into the fabric of hip-hop culture. Now, Wu-Tang Clan: Of Mics and Men will enlighten fans who aren't familiar with the Five Percent philosophy about how this movement helped to shape the Wu-Tang Clan members' lives and legacies.

More like this
This James Bond Event At Abbey Road Studios Was A 007 Fan's Dream
By Samantha Rollins
The 'Love, Lizzo' Harry Styles Scene Is Just 1 Moment That Made Fans Feel Seen
By Brad Witter
Kit Connor Speaks Out On “Shocking” Lack Of Bisexual Representation
By Sam Ramsden
Read Dan Levy's Heartbreaking Message After The Club Q Shooting
By Stephanie Topacio Long
Get Even More From Bustle — Sign Up For The Newsletter