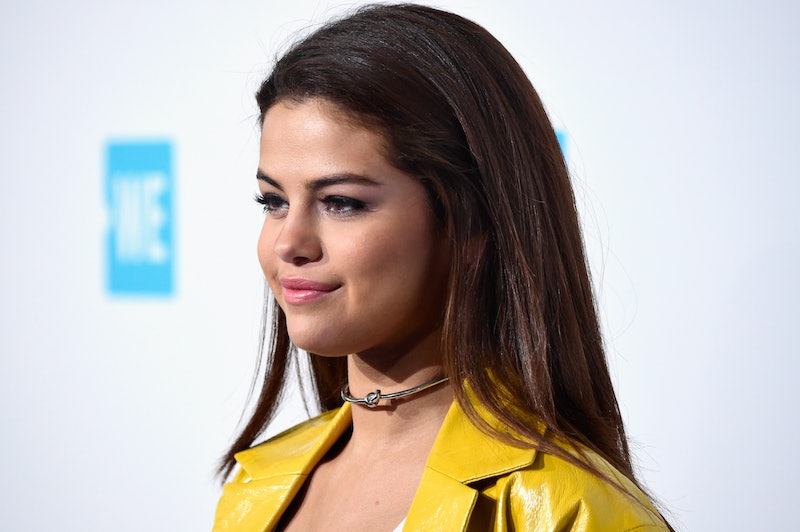 As the most-followed person on Instagram, it feels like the world really knows who Selena Gomez is. But I have a hunch that there's a lot she's keeping to herself (or trying to, anyway) — and understandably so. It's been a challenging road for the performer, and it's no wonder why she'd want to keep her walls up and hold onto the integrity of who she is without getting the public's unwarranted opinion on every little detail of her life. However, when she does give fans a glimpse into who she is, it's a reminder of why they love her so much in the first place. In a new interview, Gomez reveals her "depressing" taste in pop culture, and it says a lot.

In the middle of her Revival Tour last summer, Gomez announced she'd cancel the remainder of the shows in order to focus on her mental health and get herself back on track. She revealed her lupus diagnosis and the side effects, like depression and anxiety, that come with it. At the American Music Awards in November, the star reemerged with an incredibly powerful message about taking a break from it all, namely social media. In a recent Vogue interview, Gomez opened up even more about just how dark life became before getting the help she needed.

Now that she's on the rebound, she took part in Vogue's "73 Questions" interview — and, although it's simple and lighthearted, it reveals a lot about her. She looks like she's really taking care of herself and in a good place. And her taste in films and TV alone shows she's embracing all qualities that make her her — darkness included.

Something I've always loved about Gomez is the wisdom she possesses that seems ahead of her time. She recently expressed the difficulty of connecting with her audience now that it's older, as she felt the need to teach them something but didn't know how. "I'm looking into their eyes, and I don't know what to say... I felt I had no wisdom to share," she said. In the interview, she's asked "What's your spirit animal?" and responds with 67-year-old iconic actor "Meryl Streep." Later, when asked to tell a secret, she says, "I think I was born in the wrong era." It's great to see she's held on to that through everything.

2. She Has A Killer Sense Of Humor

Gomez was asked, "What TV show have you binge-watched these days?" She responded by saying she's been watching Larry David's Curb Your Enthusiasm. The HBO series, which is an improvised parody inspired by David's real life, has the iconic Seinfeld humor that really never gets old.

It seems Gomez has had a limitless imagination since she was little, saying The Wizard of Oz was her favorite film growing up. She hasn't lost that. When asked which fictional character she'd want to spend a day with, she said Alice in Wonderland's Mad Hatter and chose Wonderland as a place to live.

4. She Embraces Her Dark Side

When asked which film last made her cry, she said Oscar-nominated war drama Hacksaw Ridge. This answer just provides a sliver of Gomez's depth. Later in the interview, she also reveals that people may be surprised to learn "how much [she] love[s] depressing things." The singer also said she feels most creative "when [she's] sad."

Although Gomez acknowledges her dark side, she's not afraid to admit she loves a good romantic comedy, too. In fact, her favorite movie that she could watch an endless amount of times is 2011's Crazy, Stupid, Love with Steve Carrell and Julianne Moore — a feel-good comedy about relationships.

Her taste not only showcases her broad love of the arts, but how multifaceted and unapologetic she is as a person. Who knew a person's entertainment preferences could explain so much?