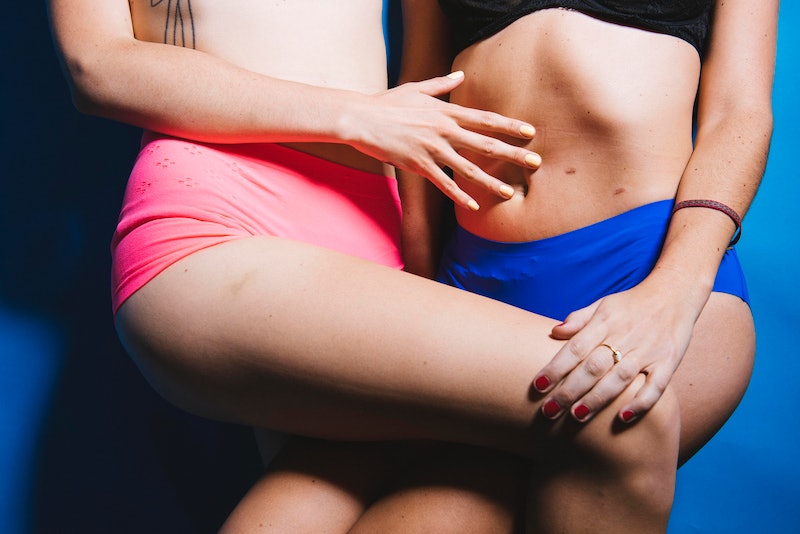 Certified sex educator and writer Emma McGowan addresses everything you need to know about sexual health in queer relationships in this week's Sex IDK column.

Q: What should I know about sexual health in non-hetero relationships?

It’s no secret that sex education is pretty limited in most of the United States — and sex education that involves queer sex? Forget about it. So if you’ve just started or are about to have sex with a person of a new gender, it’s really common to have a lot of questions about sexual health!

First of all, no matter your gender or the gender of the person or people you’re sleeping with, get tested. The CDC recommends that everyone get tested for HIV at least once and that people with vaginas who are under the age of 25 get tested for gonorrhea and chlamydia every year. Over 25, they recommend getting tested if you’ve had new partners or your partner has an STI. They also recommend that people with penises who have sex with other people with penises get tested for syphilis, gonorrhea, chlamydia, and HIV at least once per year and more frequently (three to six months) if they have multiple or anonymous partners. Finally, even people in long term relationships should consider getting tested once in a while.

But before we take a look at specific things queer folks should know about sexual health, let’s talk about language. Since we’re specifically addressing sexual health, I’m going to refer to people by their genitals, not their gender, i.e. “people with penises” or “people with vaginas.”

That’s because the recommendations for sexual health don’t apply to specific genders, but they do apply to specific genitals. While most people with penises are men and most people with vaginas are women, not all are. Also, there are relationships where one person has a vagina and one has a penis but one of those people is, say non-binary. Is that a hetero relationship? Nope — but the sexual health recommendations are the same as they would be for a man with a penis and a woman with a vagina.

So, with that in mind, here are sexual health things people in same-genital relationships should be aware of.

Sex Between People Who Both Have Vaginas

First of all, don’t believe anyone who tells you that people with vaginas who have sex with people with vaginas don't get STIs: They are absolutely are at risk of getting certain STIs. The reason this myth persists is because it is more difficult to spread STIs when two vaginas are involved than it is with other genital combinations. But that doesn’t mean it’s impossible.

But just because there isn’t a penis involved in sex between two people with vaginas doesn’t mean there’s no risk of STI transmission. Any STI that spreads via skin-to-skin contact — which includes HPV, herpes, syphilis, and trichomoniasis — can be spread via “tribbing,” which is when two people rub their vulvas against each other. Tribbing also increases the risk of spreading STIs that are present in bodily fluids, as the friction can cause tiny cuts that the bacteria or virus can get into. And bacterial vaginosis (BV), while not technically an STI, can also be spread from one person to another via tribbing or if a person with an infected gets fluids on their hands and then touches the other person’s genitals.

It’s also possible to contract and spread chlamydia, gonorrhea, and maybe HIV (the evidence is slim here) via oral sex on a person with a vagina who has one of those infections. Again, it’s a low-risk activity and it’s more difficult than when there’s a penis involved — but it’s still possible.

Finally, there’s also an increased risk if one or the other person is on their period, as certain STIs can also be present in menstrual blood.

So what’s a queer person with a vagina to do? Firstly, it seems obvious, but it’s worth repeating: if neither of you has an STI — which you can learn via testing — there’s no risk of getting an STI. STIs don’t just magically appear when two people have sex; one person has to be infected in order for the other person to get something.

But if you’re not sure of your partner’s status or you know they have an STI, here are a few options for protecting each other’s sexual health.

And always, always wash your toys after use! In addition to STIs that may linger, bacteria left on a toy can breed and cause all kinds of nasty infections. Just don’t risk it.

Don’t have oral sex with sores: If you or your partner has sores on the mouth, don’t have oral sex. If the sores are herpes, it’s possible to spread them to your genitals. And if they’re not herpes, you still have an increased risk of STI transmission, if one of you has an STI. So, mouth sores = do something else.

Sex Between People Who Both Have Penises

Get on PrEP: PrEP stands for pre-exposure prophylaxis and it’s a pill you take every day that prevents HIV infection. It’s been shown in studies to be 99 percent effective, which is pretty incredible. It’s sold under the brand name Truvada and many insurances companies cover it. The FDA also recently approved a generic version of the drug, but it’s not on the market yet.

But while PrEP protects against HIV, it doesn’t protect against other STIs. So while many people choose to stop using condoms once they’re on PrEP, best practice is to keep wrapping it up.

This is a lot of info — and a lot of it can seem pretty scary. The most important thing I hope you walk away with, however, is that most STIs are curable and every STI is treatable. While it’s important to look after your health and the health of your partners, a positive STI diagnosis isn’t the end of the world — or even your sex life.

Human beings give each other germs. Sometimes we do that with our mouths or our hands and sometimes we do it with our genitals. The calculated risk of catching some of those genital germs is simply part of being a sexually active adult and it’s one that so many of us take in pursuit of pleasure. Personally? I think it’s worth it.

More like this
My Partner Wants Me To Wear A Diaper During Sex. Help!
By Sophia Benoit
12 Active Date Ideas That'll Get You & Your Boo Outside
By Lexi Inks
5 Signs You Have A Toxic Relationship With Yourself
By Lexi Inks
18 Hinge Prompt Answers To Try If You’re Looking For Something Casual
By Lexi Inks
Get Even More From Bustle — Sign Up For The Newsletter
From hair trends to relationship advice, our daily newsletter has everything you need to sound like a person who’s on TikTok, even if you aren’t.