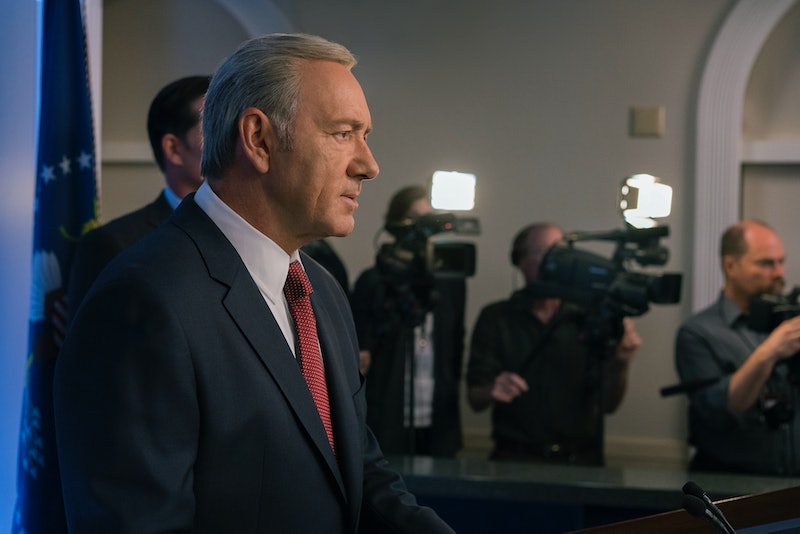 Frank Underwood isn't an antihero on House Of Cards. He's 100 percent villain, prone to evil monologues and gloating. In the first episode of House OF Cards Season 5, Frank even pulls the old bad guy trope of singing a jaunty tune in a way to make that makes it sound sinister. But what song is Frank singing in the Oval Office in Chapter 53 of the Netflix series?

As Frank looks out at a sea of protestors arguing that he's not "their" president, he mutters to himself in a sing-songy fashion. The lyrics to the song go like this:

"I wonder what the king is doing tonight?

What merriment is the king pursuing tonight?

The candles at the court, they never burned as bright.

I wonder what the king is up to tonight?"

Honestly, it's the most Frank-appropriate song for him to sing while standing atop his own castle. The source of the song is the 1960 musical Camelot written by Alan Jay Lerner and Frederick Loewe. While House of Cards uses the song as a menacing celebration of the president's stature, the show's audience may not know that the showtune is actually about how terrified the king is.

Past Frank's brief selection from "I Wonder What The King Is Doing Tonight?", the song continues on to say, "I'll tell you what the king is doing tonight: He's scared! He's scared!" As Frank is singing, he's facing more pushback in his life than ever before. Many of the American people are against him, and Will, his opponent in the presidential election, is nipping at his heels, ready to take the country from him. Frank is a man who would do anything to get into power, and is willing to do even more than that to stay there.

The show's protagonist doesn't allow himself to feel fear, but this performance may be a look through the many layers that surround his true self. In this moment, Frank is just a scared man who happens to fine solace in the classic musical Camelot; which is a far cry from the menacing, powerful political he presents himself as. Perhaps like King Arthur himself, he's "wishing he were in Scotland fishing tonight!" instead of waiting to find out if the American people even want him to be the next President Of The United States.

Frank is far from the first president to be infatuated with Camelot, as John F. Kennedy — a president who was beloved in many of the ways Underwood is not — has been associated with the musical ever since his assassination. In an interview with Time a few days after Kennedy's death, his wife Jackie revealed that before going to bed, President Kennedy loved to listen to his cast recording of the musical. He had a particular fondness for the line "Don't let it be forgot, that once there was a spot, for one brief, shining moment that was known as Camelot." After this interview, "Camelot" became a nickname for the Kennedy presidency.

While Frank Underwood is no doubt an unforgettable president, he'll be remembered for entirely different reasons than JFK.