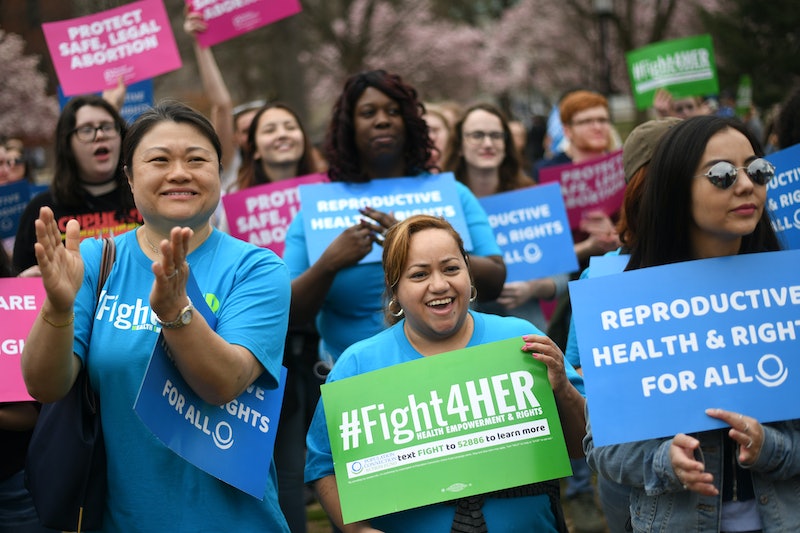 On Wednesday, Gov. Gina Raimondo of Rhode Island signed a new bill into law that protects abortion rights in her state even if Roe v. Wade is overturned. Rhode Island's new law comes amidst the increasing possibility that the landmark 1973 Supreme Court abortion rights case could be dismantled, given that the court is newly conservative-leaning. But with an uncertain future for Roe v. Wade, many states protect abortion rights by establishing state laws that would ensure access even if rules change on a federal level.

According to data from the Guttmacher Institute, 11 states all have laws on the books that establish the right to an abortion: California, Connecticut, Delaware, Hawaii, Maine, Maryland, Nevada, New York, Oregon, Rhode Island, and Washington. In 10 of these states, these laws guarantee the right to an abortion until fetal viability or throughout the pregnancy if a pregnant individual's life or health is in danger. One state, Oregon, guarantees the right to an abortion throughout an entire pregnancy, with no restrictions. If Roe v. Wade were overturned at some point, these laws would go into effect, allowing pregnant people in these states to still obtain abortions.

There are also several other states in which abortion access would likely be protected if Roe v. Wade were overturned, even though they don't have specific laws protecting abortion rights, Axios reported. As the outlet explained, 10 states currently have existing state supreme court rulings that would protect access to abortion if Roe v. Wade is reversed. These states include Alaska, Florida, Iowa, Indiana, Kansas, Massachusetts, Montana, Minnesota, New Jersey, and New Mexico.

Of course, while states have put protections in place to ensure that people can still exercise their full reproductive rights if Roe v. Wade is invalidated, there are many other states that have taken completely opposite measures when it comes to abortion rights.

Nine states had abortion bans in place prior to the Roe v. Wade ruling that would be enforced if the Supreme Court case is overturned, the Guttmacher Institute noted. Moreover, many other states passed abortion bans following the 1973 Roe v. Wade decision that could also go into effect if the ruling is reversed, the Institute added.

As The New York Times reported, there has been a flurry of abortion legislation activity since conservative Justice Brett Kavanaugh was confirmed to the Supreme Court in October 2018. Democratic leaning-states, like Rhode Island, are increasingly taking steps to codify abortion access, while Republican-leaning states are passing laws that could prompt a court case challenging Roe v. Wade. Some of these laws include early abortion bans that prohibit the procedure at around six to eight weeks of pregnancy — before many people realize they are pregnant.

As Roe v. Wade's status remains in question, it's apparent that states believe that the onus is increasingly on them to decide what abortion access may look like in the future. For many Americans, this could potentially mean that state laws and policy leanings will increasingly dictate where they reside.