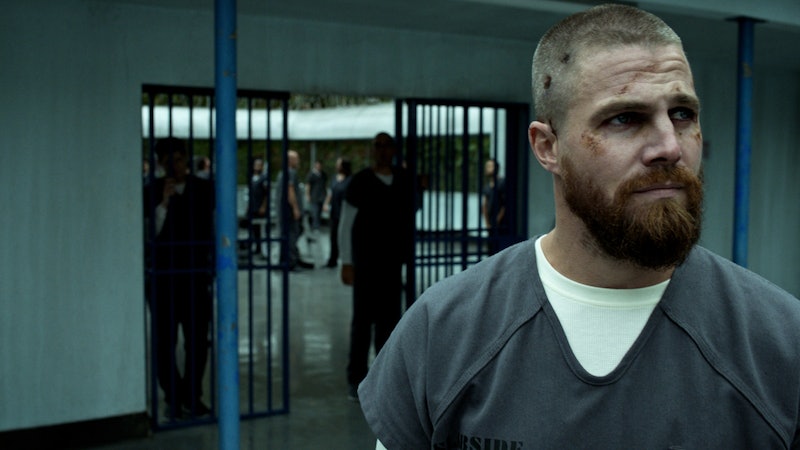 Spoilers ahead for Season 7 Episode 7 of Arrow, "The Slabside Redemption."

Arrow just went full-on action movie for Oliver Queen's last hurrah behind bars. For a comic-book show that pulls off action sequences on nearly a weekly basis, Arrow outdid itself with this week's bottle episode, "The Slabside Redemption." The episode had barely any dialogue, as most of the runtime followed Oliver (Stephen Amell) as he fought his way out of a prison riot, which ultimately ended with his long-awaited release — and a romantic reunion with his wife Felicity (Emily Bett Rickards) to boot.

It's fitting that such an action-packed episode was directed by Arrow stunt coordinator James Bamford. To pull it off, Amell says they "just turned the stunt department loose."

"It was the shortest script that I’ve ever read because it had such little stage direction in it," Amell tells Bustle along with a group of reporters on set in Vancouver. "It was basically [executive producer] Beth [Schwartz] going to James Bamford and saying, 'This is through line of what happens to Oliver from start to finish. Do what you can in the time that you have. Go.'"

Every single punch, kick, and inmate thrown across the room was planned and executed by Bamford and his stunt team. The very few plot points of the episode — Oliver finally defeating Diaz (Kirk Acevedo) but leaving him alive in Slabside, Stanley (Brendan Fletcher) betraying Oliver, and Oliver and Felicity's make-out reunion outside of the prison at the end — were the only things planned by the showrunner and writers. Everything else came from the stunt team.

"All that choreography, that was something that the stunt department I think really excelled in," Amell says. "We should get nominated for a stunt Emmy."

Now that Arrow finally has its main hero back on the outside, the show will enter a new chapter, as Oliver Queen adjusts to freedom and his new normal of being neither Green Arrow nor mayor.

"I know they wanted Oliver back in the world, and he is and in a new and exciting way," Amell says. "Concurrently, it felt like we were treating my experience at Slabside like I spent a night in county jail. In actuality, even for Oliver, it was a pretty horrific experience."

Amell wanted to signal a change in his character now that he's free. "I wanted a change in him in the way that he interacts with people, with the public, and even so far as his wardrobe," he adds. Instead of dressing like he did when he was mayor, Amell suggested that his wardrobe should be "WASP-ier" and revert back to how "he used to dress for Sunday brunch at the Queen mansion."

"In the first episode that I’m out, we had him going to a gala, and I was in sort of like the same suit that I would wear as the mayor," Amell says. "I didn’t like that. So we pushed that in a different direction, and part of the fun of this year is I’ve pitched a bunch of stuff and ... the first time that you see Oliver, we came up with a really interesting way of showing what prison life did to him without really bashing people over the head with it."

A lot has happened to Star City since Oliver got locked up, including the fact that someone new has taken up the mantle of Green Arrow... and no one, not even the old Team Arrow, knows who it is underneath the imitation hood. Fans won't have to wait long to find out what Oliver thinks of his copycat.

"He runs into the new Green Arrow, or runs into the new Green Arrow’s exploits pretty quickly," Amell says. "But coming out of prison, he gets asked that specific question very early on like, 'What are you going to do?' and he says, 'I’m going to try and do what you guys did, which is just find a different way to help the city.' We come up with that idea pretty quickly, but I think one of the fun things is it’s not Oliver who comes up with it."

As for Oliver and Felicity, after seven episodes of keeping them on opposite sides of the glass, they're finally getting their due. "Wow, we have some really fantastic scenes in [the next episode]," Amell says of the "Olicity" relationship. "Obviously we see each other for the first time at the end of [this episode] but then pretty quickly, I learn that a lot of the stuff that Diaz was saying about Felicity is true ... and we do work it out pretty quickly. We come to an understanding that nothing’s ever going to be perfect."

So any "Olicity" fans worrying there's more drama for the beleaguered couple can breathe a giant sigh of relief over any secrets Felicity might be keeping about her dark revenge on Diaz. But that's not to say there will be totally smooth sailing ahead for the couple. Apparently real estate (?!) is going to be a big issue.

"One of the other things that we talked about a lot is Oliver can’t live in a normal apartment building anymore, right?" Amell says. "I thought that they should militarize the Queen mansion. I got shot down. I think we could afford to do that. But nothing’s ever going to be perfect or normal about our relationship, and I think that the sooner that the two of them accept that, the sooner that they can move on with their lives."

Hopefully he means move on with their lives together, otherwise some very angry Olicity fans might start a riot of their own.