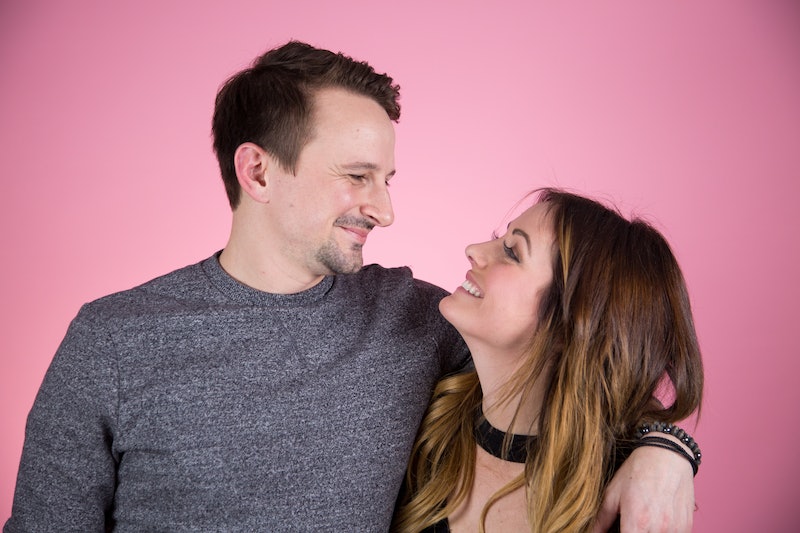 Over the course of Nick Viall's season of The Bachelor, Bachelor in Paradise couple Carly Waddell and Evan Bass will contribute weekly articles to Bustle about their friend's journey to find love. Read their take on all the first half of the Fantasy Suite dates below.

Monday's episode was brief, slow-paced, and yet somehow captivating. Andi showed up (while the women were freezing their butts off waiting for a rose) and Nick made a decent attempt at pretending to care. After much ado about nothing, Corrine was shockingly shipped back to Raquel. She cried. A lot. And then, in true Corinne fashion, fell asleep in the car after a rant about never worshipping men again. I’m happy, but also a little concerned that this is her biggest takeaway from the experience. Pretty much all that happened next was a seemingly innocuous Fantasy Suite date with Raven where we found out that she’s only hooked up with that one guy and she’s never had an orgasm. (That must be the same philandering menace that got hammered by Raven’s stiletto, right? I think it’s safe to say that guy's dating life is officially over.)

Raven’s admission, though honest and important to bring up, put a ton of pressure on Nick, and, in the closing credits, Nick attempted a frozen tundra version of Rocky, undoubtedly preparing himself to slay the giant “O” dragon. We will have to wait for the three-hour episode next week to see how that experience ends for them. Something tells me we won’t actually get a direct answer and instead will be bombarded by metaphorical allusion. But let’s talk about what really happens in The Bachelor Fantasy Suites.

To be fair, neither Carly or I have been on a Bachelor(ette) Fantasy Suite date, but many of our friends have and the experience seems almost identical to the one Carly and I had on Bachelor in Paradise. (Carly technically had two, but we’re not going to speak about the other one and screw that guy.) So, I thought we’d give y’all some insight as to what actually goes down in a Fantasy Suite. First of all, the Fantasy Suite portion is completely without cameras. I can confirm that because I did a fairly thorough, albeit pants-less, sweep of the room for hidden devices.

Now, couples really only get a few hours of alone time. That day you’re on a date (we did body painting in our skivvies) and then the evening portion is typically a dinner and the whole day/night is filmed. It takes a long time. Besides the actual date, the producers want to know everything that’s going through your head and they take their sweet time getting all the minutiae out of us. So typically, the “Fantasy Suite” portion doesn’t start until the wee morning hours. Ours was 2:30 a.m. I was genuinely concerned that I would pass out from exhaustion but luckily in the fridge next to the copious amounts of alcohol there were Mexican Cokes.

There are a few light snacks and we had the option of ordering room service but who has time for that when there are far more intimate things... to talk through? We had dinner earlier in the night anyways and we never actually ate the food that was given to us on camera. There are no rules when it comes to eating on camera, but who wants to have a piece of cheese stuck in your teeth when the bright ABC lights are glaring at you? Well, besides Corinne.

The Fantasy Suite takes place in a hotel room or bungalow and ours was an expansive three-bedroom suite overlooking the water and the spot where we had our GUINNESS WORLD RECORD BREAKING KISS. Yes, the same date where Carly puked. I still maintain that it was an amazing kiss… Who can forget the glorious spit stream? Anyways, the room also had an outdoor hot tub (which we felt had to be used over and over again). On The Bachelor this is almost always the first chance to be truly intimate with someone. On Paradise, there is ample time to hook up. There was even a room back at the Paradise ranch we called the "Boom-Boom Room." (Carly and I never used that.) During our Fantasy Suite date, we also spent some of our time on the balcony enjoying “deep conversation” that we didn’t want potentially shown on TV.

At 7:30 a.m., after a glorious five hours alone together the cameras came knocking. There was a mad rush to throw on bathrobes and a half-hearted attempt to put the room back together from all of the overnight shenanigans. We had ordered breakfast the night before to be delivered, so with breakfast came a slew of activity and everyone dying to know how it went. It went well.

More like this
It’s Official: 'The Bachelorette' Is No Longer A Fairy Tale
By Samantha Allen
Here's Our Ranking Of The Funniest 'Bachelor' Casting Ad One-Liners So Far
By Grace Wehniainen
Where Is Clayton Echard Now? The Former 'Bachelor' Star Is Dating Susie Evans
By Kadin Burnett
Why Did Meatball Leave 'The Bachelorette'? His Second Chance Didn’t Last Too Long
By Grace Wehniainen
Get Even More From Bustle — Sign Up For The Newsletter