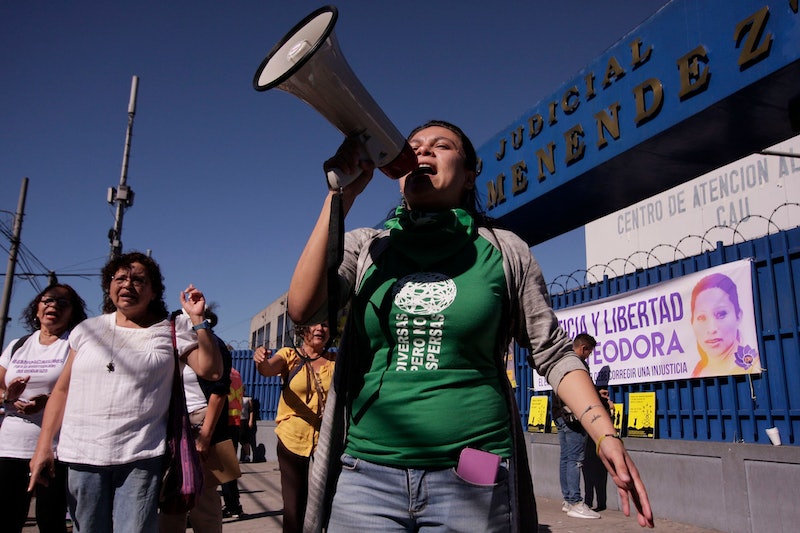 Abortion is illegal in all circumstances in El Salvador, where many women have been imprisoned for what they say were actually miscarriages or stillbirths. One of those women, Evelyn Beatríz Hernández Cruz, was sentenced to 30 years for aggravated homicide in 2017, after prosecutors argued that she should have sought antenatal care after having a stillbirth into a toilet. On Monday, Hernández will receive a retrial that was ordered by the country's Supreme Court in February, the first of its kind in the country.

EARLIER: Paula Avila-Guillen, a lawyer who is working on Hernández's defense, tells Bustle the outcome of the case will reveal what the political climate in El Salvador is like after a more liberal president, Nayib Bukele, took office in July. But it also serves as an example of the unintended consequences of near-total or total abortion bans in the United States, she says, like those recently blocked by courts in Georgia and Alabama.

Hernández, who says she didn't know she was pregnant because she was raped, had a stillbirth into a latrine in April 2016, when she was 17. Avila-Guillen says Hernández lost so much blood that she passed out, and her mother found her and took her to the hospital. When women in El Salvador are brought to hospitals with obstetric emergencies, Avila-Guillen says the symptoms are often very similar to symptoms of an attempted abortion, so "it starts a witch hunt to try to incriminate the women."

Then, during trials, she says prosecutors rely on gender stereotypes and false or inaccurate medical information to convince judges that women like Hernández tried to hide their pregnancies and then terminate them at the last minute.

"We have heard things like, 'well, it's impossible for a woman not knowing that she's pregnant,'" Avila-Guillen says. Prosecutors in Hernández's case also argued that it's impossible for a woman who wants her baby to pass out from blood loss at the time of delivery, "because her motherly instincts will overtake her and will make her rescue the baby and put the baby first."

"Even though you present evidence over and over of ... all the possible circumstances in which a pregnancy doesn't result in a happy ending, still for prosecutors it's like, 'no, she's guilty,'" Avila-Guillen says.

She noted that there is no physical evidence to prove that Hernández tried to terminate her pregnancy. During the trial, Hernández said she didn't think she was pregnant because she experienced bleeding that she thought was her period. That bleeding, her legal team says, is likely evidence that the pregnancy wasn't healthy.

Hernández told the court at the time, "I did not want to kill my son," according to the BBC.

After Hernández was convicted, petitions calling for "Justice for Evelyn" were shared across the web. In February, when she was temporarily released pending the outcome of the retrial, activists were waiting for her at the prison's gates, chanting, "Evelyn, you are not alone," according to the BBC.

Laws like these and the total abortion ban in El Salvador are "the criminalization of poverty," Avila-Guillen says, noting that, in all of the cases similar to Hernández's in El Salvador, all the women who were prosecuted successfully had lower incomes. Many of them, like Hernández, live in rural areas where they don't have bathrooms inside of their homes, and they don't have access to education or health care, according to Avila-Guillen.

Although lawmakers probably didn't write these laws to criminalize miscarriage and stillbirth, Avila-Guillen says that's exactly what ends up happening when the law is applied. As Hernández's case shows, sometimes it's impossible to tell the difference between an abortion attempt and the symptoms of an obstetric emergency.

"Any type of obstetric emergency — anything that could be seen under the suspicion of being an abortion — is going to become a possible crime," Avila-Guillen says. Then the application of the law disproportionately affects low-income women, as it has in El Salvador.

Avila-Guillen points to the case of Marshae Jones, an Alabama woman who was charged with manslaughter after a co-worker she was allegedly fighting with drew a gun and shot her, killing her five-month-old fetus. The indictment against Jones, which was later dropped, alleged she initiated a fight "knowing she was five months pregnant.” While Jones' case is not related to an alleged abortion, Avila-Guillen says it's a prime example of how prosecutors look to blame pregnant people any time a fetus is harmed.

The outcome of Hernández's retrial will come down to whether a new judge on the case "will actually hear the evidence in an objective manner that's not based on the gender stereotypes of this label that they put on all the women — that we supposed to be super-mothers when it comes to pregnancies," Avila-Guillen says.

Hernández has been out of prison since February, when the Supreme Court ordered a retrial, and since then she's been spending a lot of time with her mother and the rest of her family. She's also been receiving support and therapy from Agrupación Ciudadana por la Despenalización del Aborto (Citizen Group for the Decriminalization of Abortion).

"She's feeling a little more hopeful," Avila-Guillen says. "She is hopeful, but at the same time you can see in her eyes that she's very terrified what can happen on Monday."