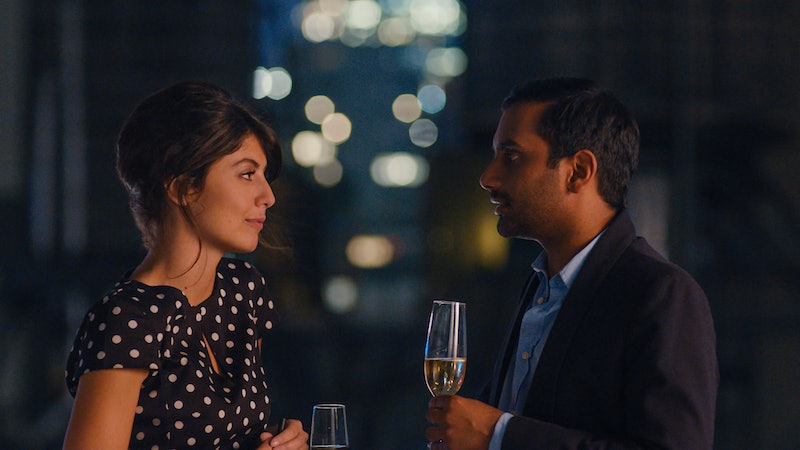 Alessandra Mastronardi doesn't know how her own show ends. When she comes into Bustle's New York HQ a few days before the May 12 launch of Master of None Season 2, she asks me which of the multiple final shots Aziz Ansari actually used for the last episode. Since I'm attempting to gain insight on what the Master of None Season 2 ending means, it's ironic that Mastronardi herself doesn't even know what happens.

SPOILERS ahead! When I fill Mastronardi in on the choice (Francesca and Dev sleeping in bed together for a brief, unexplained, almost dreamlike moment), she smiles. "If he chose this one, that was my favorite," she says. Throughout the second season, the actor's character, Francesca, debates between choosing to stay with her fiancé of 10 years — or to leave him for an exciting, budding romance with Ansari's Dev. The final couple of minutes of the series show Francesca with her fiancé as they pack up to go back to Italy. It appears as though she did indeed choose the safety of her long term romance. But, in the next scene, she is in bed next to a sleeping Dev. Snow falls softly outside the window as she lies next to him, wide awake. The end credits play.

It's not immediately clear what happened. Did she really choose Dev? Is this a dream? What happened to her other romance? How did things end? Did things end? Is this an affair or did she and her fiancé have a clean break? I ask Mastronardi to explain, but her answer is as frustratingly vague as the finale itself. "It’s kind of a limbo," she says. "I think that [Ansari] chose an end that actually is open to your personal point of view of the story." In other words, as Mastronardi says, "It’s too easy to just say this is a happy ending and it’s too sad to say, 'Well she chose the other [guy].' ... [Ansari] wanted to just give to you the option to choose to have your personal end."

Personally, I wanted to believe Francesca chose Dev and they're happy together. But, it's not that simple. Her wide-eyed look as Dev sleeps insinuates there's a lot more going on in her mind than Dev even knows. He is seemingly restful and relaxed, because he got the girl. But, Francesca had to make a painful decision and suffer a loss. "It’s never easy to choose between your past and the present and happiness," Mastronardi says. She explains that she helped write the episode with Ansari and "didn’t want to show that [it] was simple to choose." In the end, it's clear that she was never going to be 100 percent happy with either option, because it still meant she had to leave something behind.

So it may not be a dream, but total happiness is still an illusion for the pair — Dev even opens his eyes at the very last second showing that he, too, isn't 100 percent secure in this scenario. He can't sleep as soundly as he may want with Francesca by his side because he knows the cost of her decision.

It's a complicated ending for a couple who is pretty happy-go-lucky on the surface for the majority of the series. But the layers of the relationship is something Mastronardi says she'd "definitely" be open to come back to explore if the show returns for Season 3. At the same time, though, she would understand if Ansari wants to follow tradition and cast a new love interest for a new season. Mastronardi was upset when the Dev/Rachel romance ended in Season 1 and didn't come back in Season 2. But she understands that "it is actually what happens with life." So, if that happens again in Season 3 and Francesca and Dev can't make their romance last, well, then that's life too.