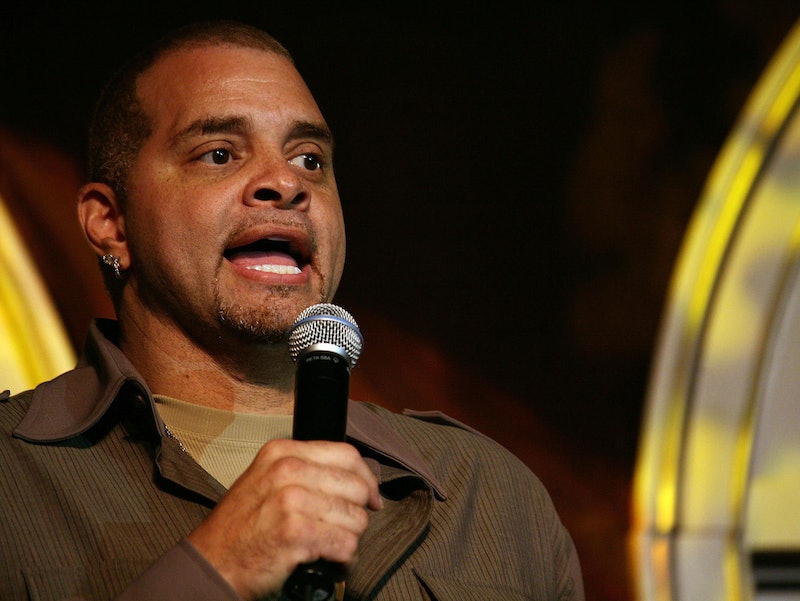 There are two kinds of people in this world: the kind who have memories of stand-up comedian and actor Sinbad playing a genie in a family-friendly '90s movie, and the kind who don't. Over the past few weeks, the wider world has become aware of this divide, which has been heavily debated on Reddit for years. Many posters on Reddit firmly believe that Sinbad starred in a movie called Shazaam and that they've seen it. The problem is that no one can find any solid evidence of this movie's existence — but that doesn't mean there aren't plenty of theories on Reddit about what the Sinbad genie movie plot actually is.

Perhaps the most vehement and comprehensive argument in favor of the movie being real comes from Reddit user EpicJourneyMan. About three months ago, the user wrote a post detailing his experience with the movie, which he claims to have ordered on behalf of a video store that he managed back in the '90s and watched numerous times. According to EpicJourneyMan, the elusive Sinbad genie movie has the kind of plot you'd expect for a PG-rated romp led by a popular comic actor. Two children — a boy and a girl — find a lamp by some means and rub it to free Sinbad's genie character. Following popular lore about those supernatural beings, the film has Genie Sinbad grant them three wishes. But what the children want most of all is their mother back. The Redditor can't remember if their parents were divorced or if their father was widowed, but he does recall Sinbad telling them he can't make that happen.

EpicJourneyMan goes on to say that Genie Sinbad does relent to helping the kids help their lonely dad. Does he deliver a new girlfriend? Unclear. The last big sequence allegedly happens at a pool party related to the father's work, but the poster doesn't remember how the movie ends.

Another Redditor who goes by the screenname Thewatchfuleye1 chimed in with a comment under this post to add more detail to the slim synopsis. "I seem to recall the father accidentally or purposefully takes the lamp to work with him and the genie is accidently [sic] released," they wrote. "I seem to recall him knocking something over for which the father gets blamed by his boss but the genie isn't seen by anyone." And in this poster's memory, the kids' dad got the happy ending they hoped for him. A female coworker makes a joke when their boss gets humiliated by the genie and "you can tell the father and her are going to hit it off."

If description sounds similar to the plot of a well-documented '90s genie movie to you, that's because it is. In the 1996 movie Kazaam, Shaquille O'Neal plays a rapping genie who helps a young boy reconnect with his distant father. And these similarities — one-named stars teaming up with emotionally struggling kids to get the grown-ups in their lives to pay better attention — could be the source of the confusion. Though, the Shazaam-truther Redditors can be defensive about the comparison. "Please, please, PLEASE! don't even bring the Shaq movie in to this conversation," EpicJourneyMan wrote. "I can't emphasize enough that it has absolutely nothing to do with this movie."

Though Sinbad himself claims that he never acted in a movie about a genie, he did tweet recently that he's up for it. And thanks to the Redditors who've outlined it, "Shazaam" already has its story arc.