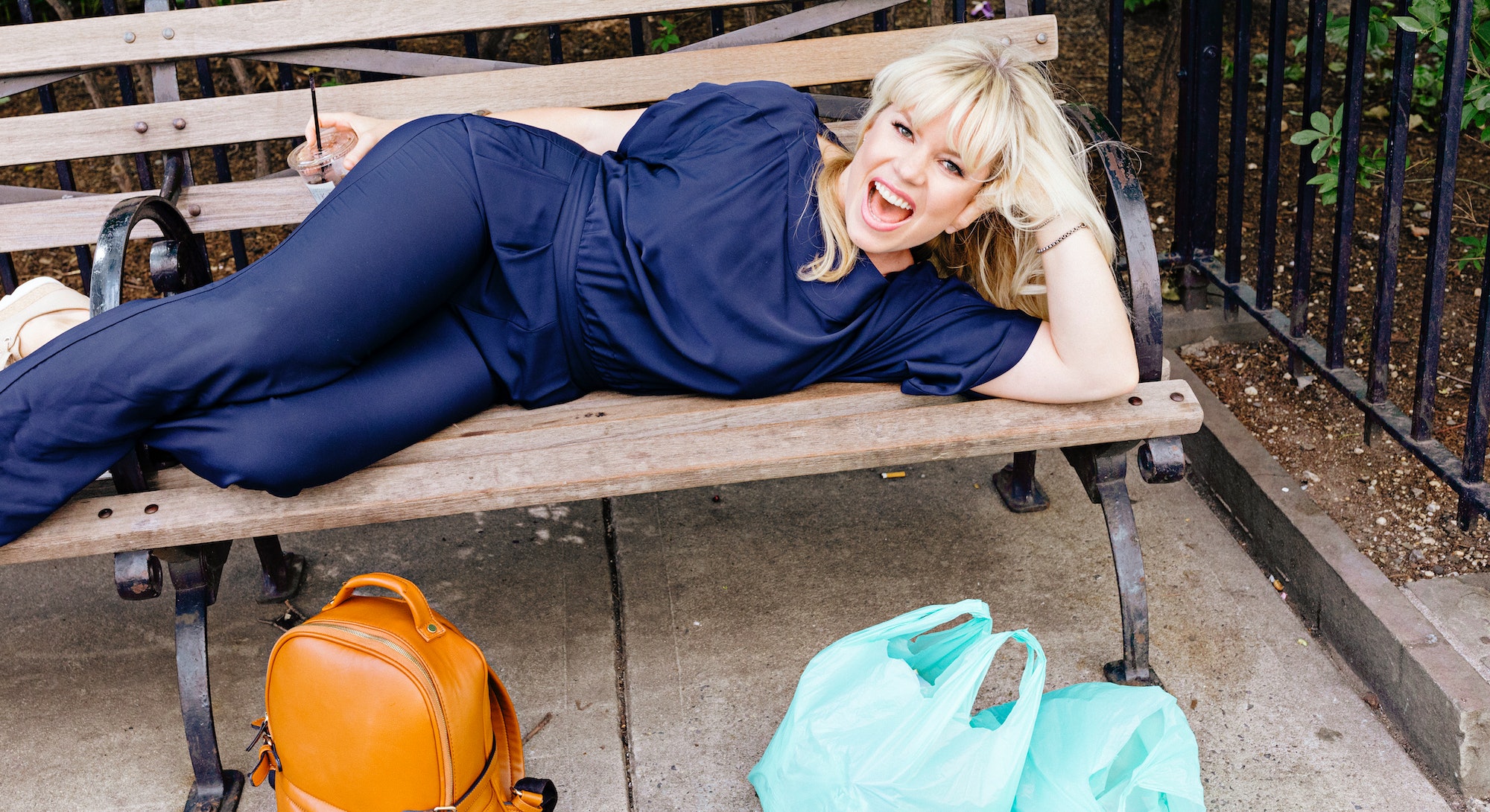 You may recognize NYC comedian Blair Socci from MTV's Ladylike. But if you think that's all she's known for, you're not paying close enough attention. From serving as a creative consultant for MTV's Guy Code vs. Girl Code to sharing weekly words of wisdom on Instagram (she calls it "Blairy Potter Positivity Hour"), to churning out her own podcast, Socci is constantly growing her résumé. She exemplifies what it means to hustle, and if you're trying to do the same, grab an iced coffee, along with a hefty serving of protein, and keep reading.

While the life of a comic tends to be romanticized in pop culture, here's what a typical day is really like — the good, the bad, and the ugly, as told to Associate Entertainment Editor Jamie Primeau.

When I first wake up, I spend approximately seven hours scrolling through Instagram. Just kidding, that'd be crazy, but seriously it's an addictive nightmare, how do we escape this hamster wheel? Then, I chug water, maybe put on some eye de-puffing cream and SPF 1,000 (I am really into skincare), and head to the local coffee shop, where I get my usual: an extra large cold brew, a side of bacon, and a side of sausage.

I'll walk in and they go, "Side of bacon, side of sausage?" And I know they're trying to be sweet and show they know me but I'm like, geez, keep your voice down, my plate of various breakfast meats is my personal business.

After breakfast, I will try to get a workout in so that I don't get kicked out of the industry. Just kidding.

Working out makes me feel strong and powerful and like Gal Gadot, in case I need to take down Ares.

I got really into yoga this year. The first time I did a headstand I could not stop talking about it. I was so excited. It's like I wanted to make myself shut up about it, but I couldn't. It was a tough time cuz everybody knows you can't talk about yoga a lot and still keep friends. But working out makes me feel strong and powerful and like Gal Gadot, in case I need to take down Ares. I need it to get the good chemicals to my brain.

12 p.m.: Interacting with Strangers on The Internet & Fielding Unsolicited Suggestions

Making people laugh is one of the coolest jobs in the world, I love it so much. For the most part, people are really awesome to me but every once in a while there are a few buttheads. A lot of people tell me I have an interesting (and "interesting" is from the nice people) voice. Before I started comedy, I had never heard a word about it, but now I get some tweets about my "vocal fry." I think this new thing of talking about vocal fry is another subtle way that men try to police the way women talk, but it's just the way I sound. I just got checked for nodes by a specialist, good news, I don't have any — just severe esophageal inflammation!

I try to treat any mean tweets like I would a crazy person yelling at me on the street — I don't take it personally, because I know they are mentally unwell. Of course, it never feels good to read mean things from anonymous psychos in your mentions, but unfortunately it seems to be a part of this job. My more famous friends have to turn off the comments on their Instagram because it can get to be too much. Luckily, there is a lot of love too.

There's also this thing when you're a comedian where people constantly say, "You should put this in one of your skits." It's like they can't help it. And it's usually a highly unfunny thing. Mostly from uncles and middle-aged men. I think sometimes they just want to participate, so I try to be nice about it. Anyway, holidays are a blast.

Who am I to crush Dylan the Office Manager's dreams?

Also, every guy I've ever met has said, "All my friends have always told me I should be a comedian." I just say, Oh cool. That's great. Who am I to crush Dylan the Office Manager's dreams?

2 p.m.: Hustling Between So Many Projects

Most afternoons, I'll either be writing, filming, on an audition, or wasting time making Instagram videos. Sometimes, I record my podcast, called How To Be a Beefy Woman. I just launched it and I'm super excited about it. I have hilarious women and men (mostly comedians) on the podcast, and we talk about food, embarrassing stories, and trying to live real large. There's no actual "how to," just a funny and honest conversation. To me, being a beefy woman is about fully embracing who you are in every way (and eating a lot of red meat and pork products)! But, of course, it means something different to everyone.

To me, being a beefy woman is about fully embracing who you are in every way.

After probably making fun of my friends a little more on various internet platforms, I will eat again (right now it's been a heavy rotation of spicy poke with brown rice) and then I'll head out for the night to do shows.

7 p.m.: Pumping Myself Up Before A Performance

Before one of my shows, I always have songs I’m listening to on repeat, like a psychopath. For a long time it’s been Lady Gaga “The Cure,” but then it was Carly Rae Jepsen "Cut To The Feeling." Oh, and a little Selena “Bad Liar” recently. I love pop music and I'm not ashamed of it! Don't @ me!

Once I'm done with shows for the night, I'll either hang with friends or watch bad reality TV, like The Bachelorette or Real Housewives. Atlanta's my favorite because they have the best personalities and are the funniest. If it's a weekend, I might toss back a few terrible chardonnays at whatever comedy club or dirty basement I'm performing in. Or I will go home and hide in my bed from the world.

Tomorrow: Doing It All Over Again

My biggest goal right now is to have fun while constantly pushing myself to get better and better. Right now, in our political climate, some comedians are getting really message-y, which is great, if that's what they want to do. People should be able to talk about whatever they want. But the message also shouldn't overshadow being funny. I just want the audience to have a good time and maybe see something they haven't seen before.