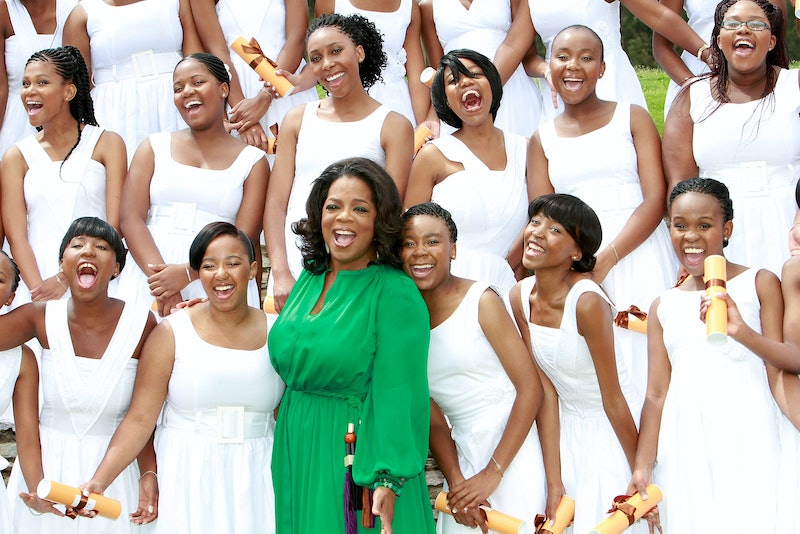 These modern-day Cinderellas couldn't care less about going to the ball. No, the young South African women who attend the Oprah Winfrey Leadership Academy for Girls (OWLAG) were lifted out of poverty by something more meaningful than glass slippers: an education. "O Girls," an upcoming Fusion documentary, features many of the women who were in the first OWLAG graduating class and follows them as they graduate from college.

Even high school graduation is an enormous accomplishment for these women, who were born into poverty and face a society still struggling to heal from apartheid and coping with the highest prevalence of AIDS in the world.

Amid all this, OWLAG students must also contend with what it means to be female in a country steeped in sexism. A 2015 survey of South Africans demonstrated that a majority of both genders still believe that women should be kept "in their place" and that men have more right to a job than women. The Saartje Bartman Centre, which protects victims of domestic violence, estimates that a woman in South Africa is raped or battered every four minutes.

How can you teach women to feel empowered in such an environment? I had the opportunity to speak with two of these graduates, Mpumi and Thando, about how the school helped them to succeed.

One strategy used by the Academy seeks to encourage young women to be honest about their struggles. This is no small feat in a country ravaged by HIV/AIDS that nonetheless views discussing the virus as taboo.

As a child, OWLAG graduate Mpumi was orphaned by AIDS. Today, she is pursuing a Master's degree in PR Strategic Communication, which Mpumi told Bustle she intends to use to speak out about how the virus affects South Africans, and how that conversation is critical to achieving real empowerment for women:

A lot of the people who are contracting the virus in my country ... are not sharing their truth. I think that they are 16-year-olds who are repeating the mistakes of a 36-year-old, and a 50-year-old, and an 80-year-old, because we live in a society that’s so very restricted in a lot of ways. My passion is ... saying to women who are in African cultural and traditional context that it’s okay to be empowered and to own your truth. It’s okay to get a say in how you regulate your body, and how your body gets to be impacted by happenings of the world.

Women around the world can attest to the need for bodily autonomy in order to achieve empowerment; by encouraging its students to speak out about the problems they have faced in their lives, the Academy teaches them to view their pasts — and themselves — without shame. The Academy, Thando tells Bustle, "made me absolutely fearless. There is nothing I am afraid to see, or go through, or experience."

The Academy also helps its students by ensuring that they have nothing to worry about besides themselves by providing full scholarships that include room and board. Since women around the world, according to OECD, are much likelier to take on unpaid care work around the home, this provides students with the much-needed freedom to focus on themselves.

Thando tells Bustle that she initially applied to OWLAG purely out of a desire to relieve her grandmother of the financial stress of school fees. After she arrived, though, she realized that her own stresses were also ameliorated. "I never had to worry about, will there be food on the table? ... clothes on my back? ... All I had to worry about was becoming the best version of myself."

In a society known for high rates of intimate partner violence resulting from sexist attitudes towards women, it is also critical to instill in girls the idea that they deserve to be treated with love and respect.

Winfrey's academy attempts to address this in a variety of ways. Kim Brooks, who hosts the O Girls special, tells Bustle that she first came to work at the school as part of an arts workshop featuring celebrities like Essence Magazine's Mikki Taylor, who spoke to the girls about self-esteem. Educators have long promoted the value of arts programs to improve self-confidence, and OWLAG students are given a variety of enrichment classes to choose from. Thando tells Bustle that she participated in volleyball and a dance company taught by a professional dancer; Mpumi describes weekend yoga activities.

The students are also taught to love themselves through close mentorship: the OWLAG community is presented as a family. The women featured in O Girls use familial language to describe their time at the school: fellow students are "my sisters" and Winfrey, with whom the girls are still in frequent contact, is "Mama O." For graduates who move to the United States after OWLAG, local host families are assigned.

"The presence of Ms. Winfrey and my host mother, Laverne Chapman, constantly reinforced humanity into my life," Mpumi tells Bustle, "and helped me understand the power of unconditional love." This made her more confident, she says, because "if I made a mistake they would be there to catch me."

Of course, the challenge of educating women who grow up in sexist societies cannot be solved with the creation of a single school. The Oprah Winfrey Leadership Academy for Girls did not set out to empower every woman in South Africa or the world, and it couldn't if it wanted to.

To hear Thando and Mpumi tell it, though, OWLAG certainly empowered them. "The Academy made me a force," Thando tells Bustle with evident pride. Ultimately, then, while OWLAG's individual reach may be finite, the strategies developed there may be useful to a much wider range of women.