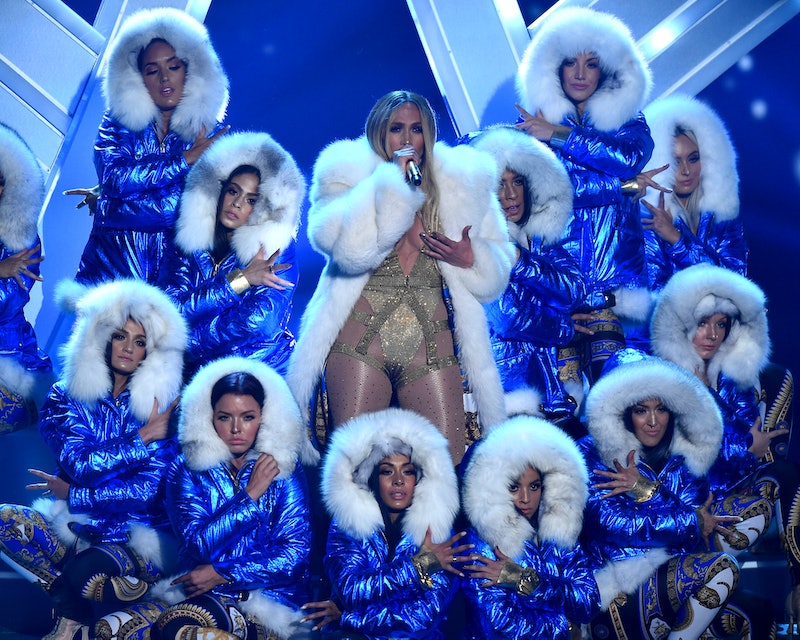 The MTV Video Music Awards are here once again. It's time for over-the-top outfits on the red carpet, memorable performances, and maybe even someone doing something (like, say, kissing another pop star or interrupting a young singer's acceptance speech) that will secure their place in VMAs history. So, if you want to tune in, but are confused about what time the 2019 VMAs start... well, be confused no longer.

The 2019 VMAs ceremony will start airing live at 8 p.m. ET and 7 p.m. CT on Monday, August 26, as reported by The Wrap. For the other American time zones, the show will air at 8 p.m. local time. According to Billboard, in addition to airing on MTV, the awards show will be shown on other Viacom networks, such as BET, VH1, Comedy Central, and more. The VMAs can also be viewed via a stream on MTV's website or app for users who sign in with their cable provider.

But, that's just the actual ceremony. There is also the The VMA Red Carpet Pre-Show that begins an hour earlier and will feature performances of its own. Again, it will be shown live for ET and CT timezones. The pre-show will be hosted by Nessa, Terrence J, and "special correspondent" singer Zara Larsson, and will feature performances from Megan Thee Stallion, CNCO, and Ava Max. Because there are so many awards that are part of the VMAs — and because the show is really more focused on the performances than the actual trophies — there will also be awards given out during the pre-show.

The pre-show combined with the actual ceremony makes up a few hours of TV-watching, but if you can't watch the show it first airs, have no fear. The ceremony will be replayed a couple times right after that first airing.

This year, the VMAs will take place at the Prudential Center in Newark, New Jersey, which marks the first time the VMAs have been held in the state. Generally, the show takes place in New York or Los Angeles, but it has also been held in Las Vegas and Miami.

The show also will have a host this year, which is a change from 2018 when the ceremony went without. Stand-up comedian and actor Sebastian Maniscalco will take on the role. "I'm not taking the approach of making fun of people," he told The Hollywood Reporter ahead of the show. "I'm going to stick with my brand of humor and give commentary throughout the night about what I'm seeing. I think what MTV liked about me is that my comedy is centered around saying what people are thinking."

As for what else viewers can expect? A lot of performances from some of the top pop stars out there, of course. Taylor Swift, Miley Cyrus, Shawn Mendes, Camila Cabello, Normani, Lil Nas X, Lizzo, Bad Bunny... the list goes on and on. And on top of all of those performances, Missy Elliott is receiving the Video Vanguard Award, which means she'll be performing her hits, too.

Basically, there is a lot to look forward to, so if you want to check it all out, make sure you tune in. At the right hour for your time zone!