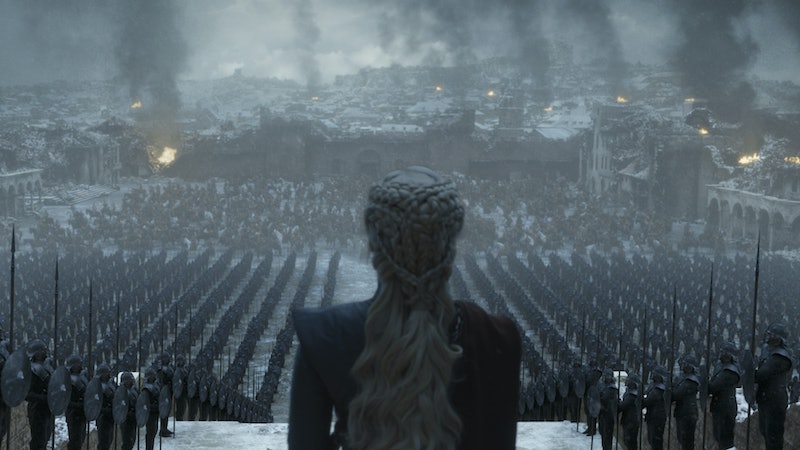 While it's true that the Battle of Winterfell and the Battle of King's Landing were two of the most action-packed episodes in Game of Thrones history, the series finale may prove to be the most important episode of all, revealing once and for how this fantasy saga will come to a close. That means it's more important than ever to know what time the Game of Thrones series finale is before Sunday night. You don't want to miss a single moment of all the twists and turns still to come.

The show's penultimate episode ended with the complete and total destruction of King's Landing, as Daenerys chose to lay waste to the city even after the bells rang to signal a surrender. Just as many feared she would, the Mother of Dragons went full Mad Queen, leaving little but a pile of ash in her wake. Will she now ascend to the Iron Throne, which has always been her ultimate goal? And if she does, who will she rule now that so many of the citizens of King's Landing died due to her wrath? Will Jon or Arya end up killing Dany before she can hurt anyone else? These are all questions that the series finale is sure to answer, for better or for worse.

As for when to tune in to see how it all goes down, it's pretty simple. Like always, Game of Thrones will air at 9 p.m. ET on HBO, HBO Go, and HBO Now. However, if you live in a different time zone, it's important to note that the streaming platforms release the episodes at the same time all across the country. So if you live in California, you'll be able to watch the finale as early as 6 p.m. PT, given the three hour time difference from the East Coast. And if you're worried about the number of loose ends left to tie up in just one episode, rest assured there will be plenty of time dedicated to wrapping up the remaining storylines: the series finale clocks in at one hour and 20 minutes.

Given the general response to Season 8 so far, odds are that not everyone will be happy with how Game of Thrones ends. Many dislike the fact that Dany has become evil so quickly, while others feel the overall season has felt rushed, opting for big action scenes over character development. But when you're dealing with a show as popular as this, there really is no way to please everyone. It's just impossible. And whether we agree with these decisions or feel like the narrative has fallen a bit flat, the series is ending, our opinions be damned. The discussion may carry on after the fact, but the characters' fates are sealed.

Let's not get ahead of ourselves, though. We still have one episode left, so make sure to set every possible alarm you need to so you don't miss it and end up facing the biggest threat of all: spoilers.

More like this
Alicent's Green Dress In 'House Of The Dragon' May Be An Act Of War
By Kadin Burnett
Nicola Coughlan Shared A Lady Whistledown Excerpt From ‘Bridgerton’ Season 3
By Grace Wehniainen, Alyssa Lapid and Sam Ramsden
'House of The Dragon' Episode 6 Will Take Place A Decade After Episode 5
By Kadin Burnett
This Episode 6 Moment Foreshadows Viserys' Fate On 'House Of The Dragon'
By Grace Wehniainen
Get Even More From Bustle — Sign Up For The Newsletter