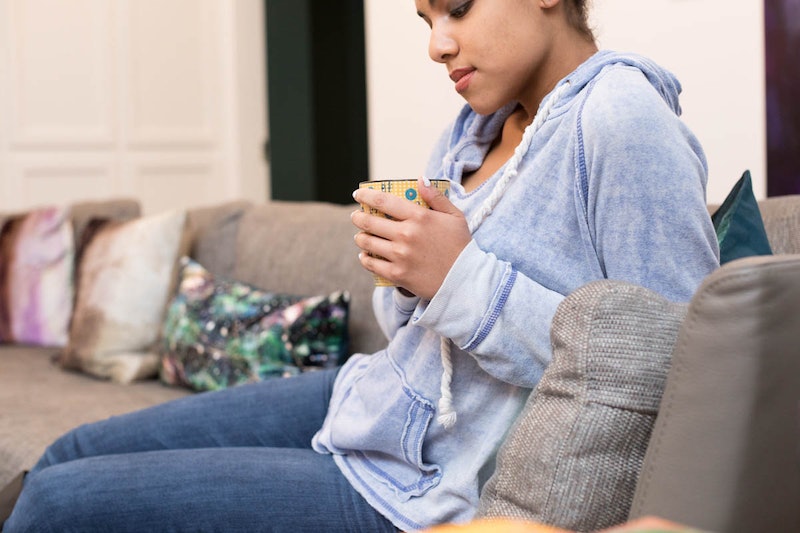 In the moments immediately following a panic attack, breathing and feeling present are the main focuses. Anxiety UK recommends that breathing and visualization rituals can be a good idea to feel more "grounded" just after your panic attack has finished, and can help calm panicked breathing. Their patterned breathing involves breathing in, thinking "I'm in control," breathing out, and thinking "relax." Another of their approaches involves visualizing the panic being "pushed" out of the body, from the top of the head down through the bottoms of the feet. Focusing on that in the immediate aftermath of a panic attack can help the body start to come out of its adrenaline spike, and let you recover slowly.

After the first few minutes of panic attack aftermath is over, what experts call the "hangover" of post-panic attack experience begins. The Calm Clinic highlights one of the most normal reactions after a panic attack: exhaustion. According to their experts, fatigue after panic is a combination of adrenaline comedown, muscle tension, and excess brain activity. Rest after a panic attack is often very necessary, because your body is physically and mentally worn out. It's also very common to feel 'spaced out' after a panic attack has happened: disconnected from reality and strangely exhausted. The Anxiety Centre explains that this is normal, and that people who are feeling like this should wait for it to pass; as anxiety attacks and panic are treated and become less frequent, the spaced out feeling should also become less intense over time.

Physical self-care becomes important once you're out of the immediate panic recovery stage. Many people who live with anxiety have practiced calming techniques that are nourishing in some way — whether it's a cup of tea, a bath, a long walk, some meditation, listening to favorite music, or something else — and also re-establish a calm baseline for mood. It's recommended that you find some way to achieve this as soon as possible, even if it's as simple as going to the nearest bathroom and looking at calming pictures on your phone. Experts also recommend that these rituals shouldn't involve depressants like alcohol or stimulants like excess caffeine. If you're in a position to give your body rest, do so.

It can be tempting to continue to think about what's just happened, but the research advises against it. The makers of the Spire Stone, a device measures your breath and provides feedback on how to improve your mood, note that aftercare post-anxiety attack can come in many forms. Their research indicates that while it's important that people recovering from their attacks acknowledge the anxiety they've been experiencing, they also need to focus on calming their breathing and, once they're physically able, distracting themselves from what had caused it.

Reading, walking, and getting into a new location are all recommended for getting distance from the trigger for the initial attack, as well as re-establishing some stability. Writer Alida Nugent, writing for Headspace about her own panic attacks, notes that her own experience has shown that this distraction method is a good idea for public panic attacks in particular. "When it’s over, try to let it be over," she advises. "Later, at home, maybe drink some tea and think about what triggered the attack, but try to enjoy the moments immediately afterward. The worst part is over. You can relax."

Longer-term, management of the post-attack hangover can take into account some more general anxiety care. Mind, the mental health charity, recommends that you try to talk about the attack with somebody you trust, whether a close friend or a professional therapist. They advise that your self-talk should be part of your care regime too: say mantras to yourself if it helps, and treat your own inner monologue with care.

The period after panic attacks can be scary, but you have to keep reminding yourself that it's survivable, you'll get through it, and things will begin to feel better.

More like this
Ashley Benson Revealed The Whole-Body Effects Of Her Anxiety On TikTok
By Stephanie Topacio Long
Dyson Is Dropping Futuristic, Air-Purifying Headphones
By Rachel Lapidos
6 Unexpected Causes Of Post-Workout Fatigue
By Carolyn Steber
The Millennial “Queen Of Manifesting” On Turning Jealousy Into Inspiration
By Faith Xue
Get Even More From Bustle — Sign Up For The Newsletter