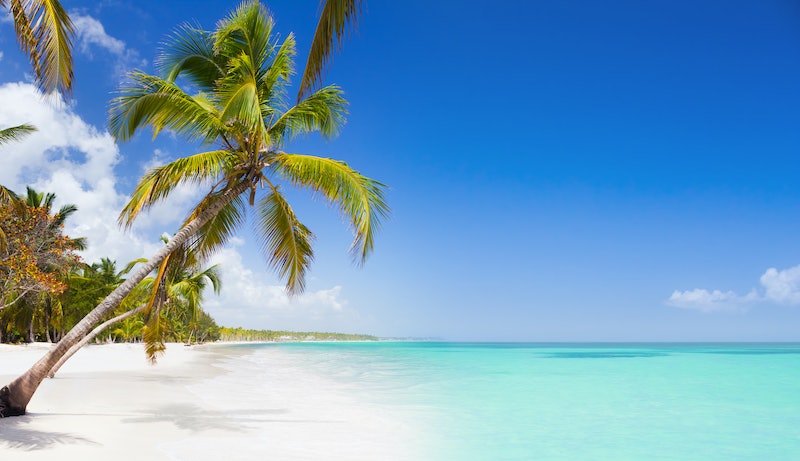 Following reports of tourists falling ill — sometimes fatally — after trips to the Dominican Republic, travelers with plans to visit the Dominican Republic soon might be wondering what to do about their trip, what the facts about the situation are, and what their rights as travelers. Unfortunately, the situation is ongoing and unclear at the moment, but we can take a look at what we do know so far: According to various reports, a number of American tourists have reportedly been getting sick after stays in the Dominican Republic, and there have been at least seven deaths of tourists reported in the last year for various reasons. In June, two American tourists were found dead in their respective hotel rooms in different Dominican Republic resorts — and only a few days ago, former Bachelor star Melissa Rycroft revealed on social media that she'd fallen ill during a trip to a Dominican Republic resort this month as well. Additionally, the FBI is now investigating the reports.

There's been no official cause for the illnesses and deaths, and it's not even clear if the cases are linked to one another. In a statement, a Ministry of Health spokesman with the Dominican Republic Ministry of Public Health, Carlos Suero, told Fox News that reports of tourists falling ill are "all a hysteria against the Dominican Republic, to hurt our tourism." Suero continued, "the testing results are all negative, everything — the food, the alcohol, the air — is normal, there is no alteration of the alcohol. With all the tourists we get every year, we make sure we comply with international standards for everything."

Similarly, Francisco Javier Garcia, the minister of tourism in the Dominican Republic, told Fox News, "what began as a news story has transformed and transformed and transformed into a negative campaign [against the island]. Not because it was mounted but it evolved." Garcia went on to state that officials in the Dominican Republic are still awaiting results of the toxicology reports from the FBI relating to the tourist deaths.

What We Know So Far:

On June 13, Joseph Allen, 55, of New Jersey, died at his resort in Sosua, DR after saying he didn't feel well at the hotel pool. Leyla Cox, 53, of New York City, was found dead in her resort hotel room in Punta Cana, DR, on June 10.

Nathaniel Holmes, 63, and Cynthia Day, 49 of Maryland, were found dead in their hotel room in La Romana, DR, on May 30. They had suffered from internal bleeding, and had fluid in their lungs, though Holmes had a pre-existing condition. Miranda Schaup-Werner, 41, of Whitehall township in Pennsylvania, also died with fluid in her lungs on May 25 following a trip to La Romana, DR, during which her husband reported that she fell ill following a drink from their hotel room's minibar. Susan Simoneaux of Luling, Louisiana died on June 18 following a trip to Punta Cana, DR for her honeymoon — also with fluid in her lungs.

In April, John Corcoran, 64 — the brother of Shark Tank star Barbara Corcoran — was found dead in his hotel room in the Dominican Republic, though, according to Country Living, Barbara and her family have stated that John died of natural causes related to a heart attack. Robert Wallace, 67, of Turlock, California, died in Punta Cana, DR on April 12 after becoming sick following a drink of scotch from his hotel room's minibar.

The causes of these deaths and the other tourist illnesses have not been pinpointed yet, though the U.S. Embassy has said they are working with Dominican officials to get answers — and the FBI is reportedly testing minibar samples at local resorts following the reports of people falling ill after drinking from their hotel minibars. According to the New York Post, authorities are also considering the possibility that tainted or counterfeit alcohol could be the culprit.

Other Reports Of Illnesses Have Emerged As Well

Since the reports of these deaths have made the news, there have been many other stories about people getting sick while on vacation in Dominican Republic. At least 47 people from Oklahoma reported getting very sick while visiting the country as part of a Jimmy Buffett fan club in April. Colorado couple Kaylynn Knull, 29, and Tom Schwander, 33, told CNN they became violently ill during a stay at the Grand Bahia Principe Hotel in La Romana, DR in June 2018 — the same resort that Holmes, Day, and Schaup-Werner were found dead in this month. The couple is now suing the hotel. According to CNN, a spokeswoman for the Grand Bahia Principe Hotel wouldn't comment on Knull and Schwander's allegations due to "pending litigation," but she stated that the three tourists' deaths this month were isolated incidents, unrelated to Knull and Schwander's allegations. "[There] are no indications of any correlation between these two unfortunate incidents," the spokeswoman said in a statement to CNN.

This Doesn't Mean You Should Avoid The Dominican Republic

As NBC News has pointed out, reports of mass illnesses like this are not uncommon in the Dominican Republic and other parts of the Caribbean: The CDC warns tourists that drinking the country's tap water could put them at risk of hepatitis A, typhoid, and cholera. Traveler's diarrhea is also an extremely common occurrence there.

As an anonymous expert on Dominican tourism told Fox News on June 19, a decline in tourism is expected to hit the DR following these reports, but that official causes of death for the tourists will have to be released soon. "If this is not figured out, it will be a catastrophe [for the country] ... it would be really bad if we end up with a 10 or 15 percent decline [in tourism]." He continued that a decline in tourism wouldn't just affect the hotels and resorts, but also the communities they're in. "It's thousands and thousands of dollars that enter these communities directly or indirectly from the tourism industry... a fall of 10 percent of tourism is a 10 percent fall of income for these communities."

There's No Official Reason To Cancel Your Trip

There's no official warning for American tourists traveling to the island, so there's no official reason to cancel your trip. If you do decide to go to the Dominican Republic, just take precautions you would before any international trip. As Robert Quigley, senior vice president and regional medical director for International SOS, told CNN, travelers should see a doctor before they go "especially if they might have a chronic medical condition or cardiovascular disease." Quigley explained that the sleep deprivation and stress that comes with traveling can often make underlying conditions much more serious.

The Dominican Republic receives about six million tourists every year, and it's important to put these deaths in perspective. Eddie Lloyd, an expert on Caribbean travel, told the Washington Post, "Yes, bad stuff happens to tourists, whether it’s a bus crash or a death. Is it indicative of the destination falling apart? No." He added, "It would be quite rare to recommend that people avoid the Dominican Republic."

What Are Your Rights If You Do Want To Cancel?

If you still feel uncomfortable traveling to the Dominican Republic at this moment and you already have a trip booked, chances of getting your money back will vary. Look into the cancellation policies of your hotel and airline, then figure out what steps you need to take from there.

Some hotels do offer free cancellation, but it's the airlines that may give you an issue — especially if you booked a non-refundable ticket. Depending on the type of ticket you booked, you may be eligible for some type of refund or credit. You likely won't get a full refund from an airline, though, especially considering there is no official warning not to travel to the Dominican Republic.