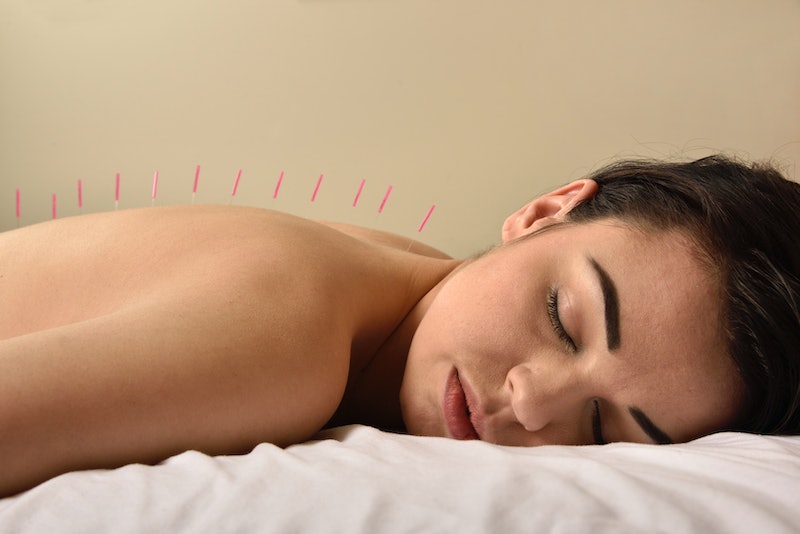 You may know the gist of acupuncture: you lay down and relax, while a trained acupuncturist places needles into your skin in specific points on your body. Many people are skeptical about acupuncture, but the truth is, studies have shown it can be super beneficial for your mental health, chronic pain, blood flow, and in reducing stress levels and inflammation. If you've decided to give acupuncture a try, you should know what to expect at an acupuncture appointment, because it'll make your experience that much better.

Since acupuncture is a component of Traditional Chinese Medicine (TCM), your first appointment may be a little different than what you’re used to — especially if you’ve only received standard medical care in the past. But, in many ways, seeing an acupuncturist will be like just visiting a new doctor.

“In their first treatment, new patients will have a discussion with the acupuncturist to review their medical history and current symptoms," Daniela Freda, a licensed acupuncturist, tells Bustle. "The acupuncturist will perform a Chinese Medicine examination by taking the wrist pulse and looking at the tongue. Then, they will determine the treatment plan and administer the acupuncture.”

Probably one of the most common anxieties around trying acupuncture is the use of needles in the practice. And, if you actually experience trypanophobia, aka, an extreme fear of needles, then acupuncture is almost certainly not the right therapeutic practice for you. However, if you’re just slightly nervous about needles causing pain, Freda says there’s no real cause for concern. “First-time patients are nervous about the needles since most people have only had shots for vaccines or needles from blood tests. Acupuncture needles are significantly thinner than these needles, so there is much less sensation as the needles are inserted,” she explains.

Freda explains that the acupuncturist will walk you through the process, step by step, to ensure you feel comfortable and not stressed. Then, your acupuncturist “will typically insert about ten needles in different parts of the body and the needles are retained for twenty to thirty minutes.”

If your anxiety about acupuncture is less about the needles causing you pain, and more about their posing a risk of infection, that’s also a moot concern: As long as you see a licensed acupuncturist (LAc) — who are required to use sterilized needles only once — Freda says “the adverse effects from acupuncture are minimal,” with slight bruising being the most typical negative effect. See? Not so scary, after all.

Unlike being stuck in a typical physician’s office that often feels sterile and uninviting, Freda says, “The whole experience of acupuncture is much more comfortable since we create a relaxing environment with patients laying down in a private room with soft music, and dimmed lights.” Michelle, a community organizer who has been seeing an acupuncturist since her teens for chronic health issues, explains that her first appointment was “rather awkward, but only because how empathic and in tune my practitioner was.” She adds that “acupuncture may be expensive, and most insurances won't cover it, but it helps and it's one of the things that saved me from having to get carpal tunnel surgery. It can be uncomfortable, but never painful.”

Everyone’s minds and bodies are unique — the impact acupuncture has on your wellness may be completely different than how it affects someone else. But many patients who regularly see acupuncturists swear by the practice.

“While I wasn’t nervous or scared to try acupuncture, I was extremely skeptical, as I had undergone several Western medical procedures," explains Wendi, a community organizer who has seen an acupuncturist for over two decades for chronic pain. "I went in expecting to see little, if any, improvement. Immediately after that first session, I felt calm and slightly pleasantly disoriented. I felt some immediate pain relief, but it was subtle. What had been a deep, throbbing pain was now more of a dull, steady ache."

“Acupuncture quite literally affords me a sense of normalcy and the ability, if only briefly, to live a mobile life with less-than-excruciating pain,” Wendi says. “For several days after each appointment, I feel an increased general sense of well being.”

Freda reiterates that “after the treatment, most patients feel relaxed with a calm, uplifted mood.” However, she says this can vary from person to person: Some people will feel more energetic after an acupuncture appointment, while others want to get a good night’s sleep. “For first time acupuncture patients, I recommend to take it easy after their first appointment. As you learn how your body responds to acupuncture, you can plan how it will fit into your day,” she explains.

Trying any kind of medical practice you’re not familiar with can be anxiety-provoking, but your acupuncturist should be there to make you feel comfortable throughout the entire process. Don’t be afraid to look for a practitioner you like, voice your concerns, and keep track of how your body and mood feel afterwards. Your first time acupuncture appointment doesn’t have to be scary.