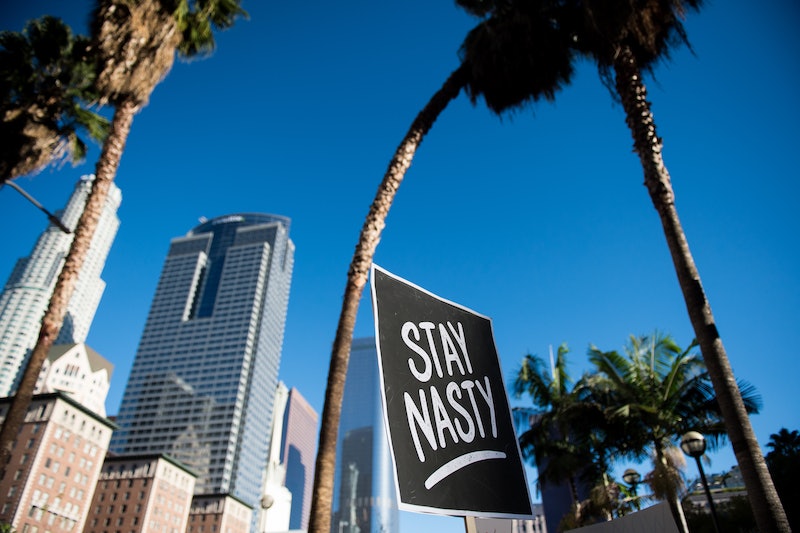 The "Day Without A Woman" strike is coming up on March 8, 2017. It's the follow-up event to the Women's Marches that took place across the country (and the world) on January 21, 2017, the day after President Trump's inauguration. The women's marches around the United States were estimated to have had over 4 million people in attendance, and hopefully the "Day Without A Woman" strike will see equally large numbers. You might be planning to strike and fielding questions from people who don't understand your motivations for doing so — I know I was asked why I attended the Women's March more than once. Everyone has different reasons to strike on "A Day Without A Woman", but if you're unsure of what to say when people ask you how wearing red is really going to make a difference (eye roll), I've come up with a few comebacks to keep in your back pocket.

Just a quick refresher, there are three ways you can participate in the "Day Without A Woman" strike. You can take the day off from paid or unpaid labor; avoid shopping (or if you must, shop at small minority- and women-owned businesses); and/or wear red in solidarity with the movement. There are many ways to participate even if you don't have the luxury of being able to take off work — something many women cannot afford to do. Still, that doesn't mean everyone understands the importance of this movement, so here are a few ways to respond to those who doubt your reasons for participating.

1. Because Women Are Still Paid Less Than White Men For Doing Equal Work

The pay gap does exist — in 2015, women working full-time were paid just 80 percent of what men were paid, and it's an even bigger gap for women of color. Some reports say it could take 100 years for women to be paid at equal rates to men, and that's just ridiculous.

2. Because Showing Solidarity Is Important

Not everyone can take off of work or put off shopping for a day or has access to small minority- and women-owned businesses. But they can still show support for the "Day Without A Woman" strike by wearing red, and showing solidarity is important. Studies suggest that getting people politically engaged may make them more politically active, so it's not just about wearing red. It's about sending a message, getting engaged, and hopefully translating that engagement into action.

3. Because Gender Inequality Comes At A Huge Price

I mean this literally — a 2015 report found that giving women equal power in economic, social, cultural, and political decision-making would boost the GDP by $28 trillion. That's trillion with a T. What better way to demonstrate this than by showing how the economy would be impacted for a day without women?

4. Because There Are So Many People Our Culture Routinely Ignores

Yes, women in general are often ingored — for example, interrupted in the workplace and dismissed as crazy or overly emotional in everyday life. But what about women of color, women of low socioeconomic background, immigrant women, LGBT women? Their voices are often silenced, and the "Day Without A Woman" strike is an important way to stand up for those women whose voices are suppressed by society.

5. Because Women Of All Backgrounds Contribute To Society

Again, women of all backgrounds contribute to the socioeconomic system, while often receiving lower wages and facing discrimination and inequality. The "Day Without A Woman" strike recognizes their contributions that often go unnoticed or are not talked about as much as they should be.

I mean, really. Abortion was legalized in 1973, and we're still fighting over whether women should have control over their own bodies. Women have been in the workforce for over a century and we still are not compensated equally to men for doing the same jobs. Women were given the right to vote in 1920 (at the earliest) and yet women still are underrepresented in government. I could go on, but I think the message is clear. Gender inequality is real, and it is still happening.

As we saw with the amazing turnout at the Women's Marches, when we stand together we can send a message to the government and those around us that love trumps fear, hatred, and bigotry. And that's as good a reason as any.