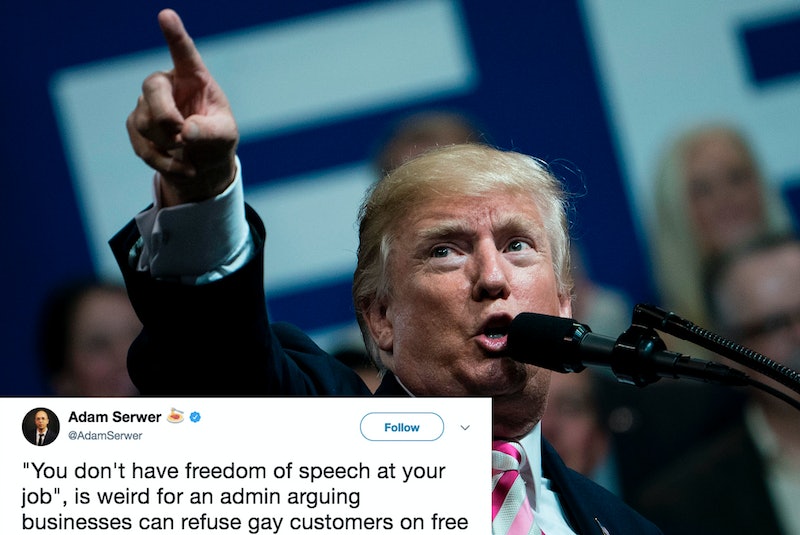 Donald Trump's indirect bashing of Colin Kaepernick on Friday night stunned many Americans throughout the country. According to reports, Trump was originally scheduled to show support for Sen. Luther Strange in an upcoming primary election on next Tuesday but the president went on a disturbing and harsh rant in Huntsville, Alabama, against football players who had taken a knee during the American national anthem in the recent past. To many, it became clear that Trump was delivering a vicious rant against Kaepernick. Referring to the Friday night debacle, one tweet shows just how Trump has been inconsistent on free speech.

One clear and most recent example, which the aforementioned tweet is referring to, involves the Trump presidency supporting a baker in Lakewood, Colorado, for refusing to make a wedding cake for a same-sex couple. The incident of the baker refusing to make a wedding cake for a gay couple took five years ago. Masterpiece Cakeshop owner Jack Phillips had reportedly refused to bake a wedding cake for David Mullins and Charlie Craig in July 2012, according to reports. Phillips claimed that doing so would violate his religious beliefs. In 2015, a unanimous three-judge panel in a Colorado court ruled that Phillips' refusal constituted illegal discrimination.

The court ruled that Phillips had violated the Colorado Anti-Discrimination Act. Deputy legal director for the ACLU, Louise Melling, said that the court "squarely said that this is discrimination based on sexual orientation and it’s not to be tolerated, even if it’s motivated by faith." But Phillips' lawyers insisted that the panel "got it wrong" while one of his lawyers said, "Our client did not engage in sexual-orientation discrimination." Phillips' lawyers expressed the intention to appeal the Colorado Supreme Court.

Most recently, the Trump administration has shown its support for Phillips. The Department of Justice agreed with Phillips' refusal on the grounds of freedom of expression and issued a brief in his favor in September.

The Department of Justice went ahead and said that the Colorado state had violated Phillips' right to free speech by declaring that he had discriminated against the couple with his refusal. Acting Solicitor General Jeff Wall explained the rationale for the department's position and said, "When Phillips designs and creates a custom wedding cake, there is no clear line between his speech and his clients" and that "[Phillips] is not merely tolerating someone else’s message on his property; he is giving effect to their message by crafting a unique product with his own two hands."

The brief went on to say, "Forcing Phillips to create expression for and participate in a ceremony that violates his sincerely held religious beliefs invades his First Amendment rights."

The tweet perfectly encapsulates Trump's inconsistency on supporting free speech. Trump administration's clear position in support of the First Amendment for Phillips seems to be in glaring contrast with Trump's most recent comments on Kaepernick who, it is worth remembering, is also exercising his complete right to free expression when he protests.

Kaepernick has articulated why he refused to stand up for the American national anthem in an exclusive interview with NFL Media, "I am not going to stand up to show pride for a country that oppresses black people and people of colour. To me, this is bigger than football and it would be selfish on my part to look the other way. There are bodies in the street, and people who are getting paid leave to get away with murder."

It's pretty simple. When Kaepernick is protesting documented police brutality against black Americans, he is exercising his First Amendment on the most fundamental and primary level. For someone who claims to love the free speech as vociferously as Trump does, his recent remarks simply reveal his hypocrisy.