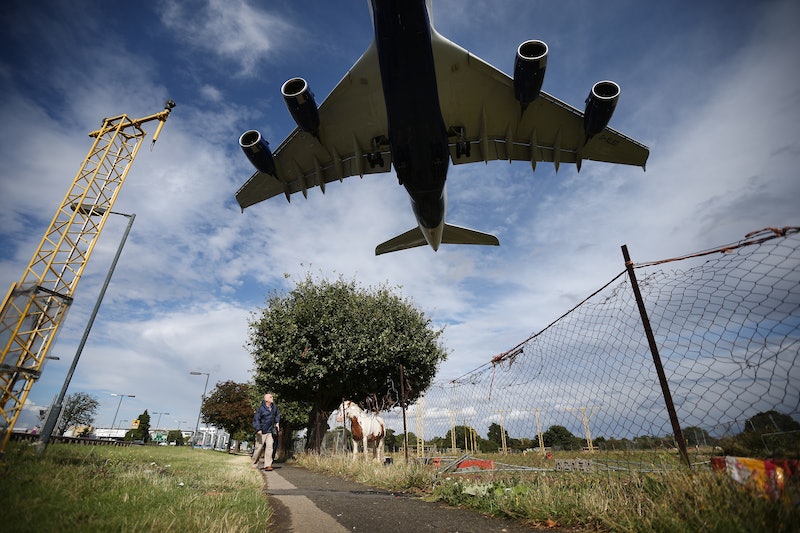 As part of his as yet vague plan to invest in and improve American infrastructure, President Donald Trump has announced that he wants to privatize air traffic control, giving it over to a private, non-profit corporation. However, when you look at what Trump's air traffic control decision actually means, things get a little bit messy. Unlike some of his decisions (Paris Accord, I'm looking at you), this one isn't without a potential upside — but its potential downsides are also pretty serious.

Trump's argument in favor of the air traffic control privatization rests on the idea that the current system is going through the process of modernization very slowly, and that privatizing it will speed that up and lead to greater innovation. He also said that the privatization plan would save consumers money by reducing flight delays and wait times. Most of America's major airlines also support the plan; in a statement to Bloomberg, a spokeswoman for American Airlines said that the current system is "inefficient and causes thousands of avoidable flight delays." She also said that the airline expected to be able to cooperate with the Trump administration "to make air travel cleaner, safer and more efficient.” However, many have doubts about the positive effects of putting the modernization strategy into the hands of a private corporation.

For example, Delta is the only major airline that isn't backing the plan, over concerns that privatizing such a big system could lead to a national security risk in addition to driving up prices for the consumer. Delta even released a study in 2016 on the subject, which claims that privatizing the system could lead to cost increases of over 20 percent that passengers would then have to cover. According to the study, "no evidence has yet been produced to show that privatization would reduce costs. In fact, nations that have privatized ATC have seen operational costs increase at a much higher rate than has been seen in the US under the FAA.”

Democrats in Congress also largely oppose the idea, as they believe that it will shift too much power over to the major airlines. This is also what bothers private pilots and smaller airlines and airports, as they feel that they won't have enough representation on the non-profit corporation's proposed board. The corporation would also require user fees, which would be more difficult for the general aviation community (i.e., private pilots) plus the smaller airlines and airports to cope with.

As ABC News points out, this essentially boils down to a question of small government versus big government. As part of their desire for a small government, Republicans believe that giving control to the private sector will stimulate what they view as desperately needed modernization. Democrats, on the other hand, believe that the public would best be served by funneling more money into the existing structure in a concentrated to modernize the system. So far, Trump has only sent a plan to Congress, so the debate between the two sides will begin soon.