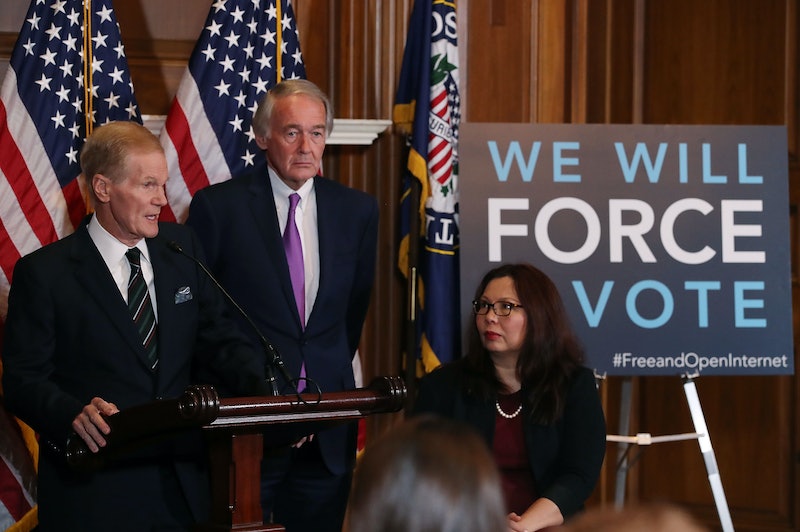 On Wednesday, the Senate will likely vote on a bill to reinstate the net neutrality rules that the Federal Communications Commission repealed in December. Although the bill has a chance of passing the Senate, it almost certainly won't become law, as Trump is unlikely to sign it. But the mere prospect has many people wondering: What was the internet like before net neutrality?

It's a tricky question to answer. In the most literal sense, the internet was much different before net neutrality — but that's primarily because net neutrality rules weren't instituted until 2005, and the internet itself was a completely different beast in 2005 than it is now. Here's what Facebook looked like in 2005, for instance — there wasn't even a news feed.

It's crucial to stress, however, that net neutrality isn't an on-off switch, so to speak. That is, it's not a single binary rule that's either the law of the land or not; rather, it's a general principle that the government has enforced to varying degrees over the decades, one that's resulted in plenty of court cases and tweaking of the rules over time.

The concept behind net neutrality is simple: It requires internet service providers (ISPs) to treat all content on the internet identically with regard to price and bandwidth speeds. In countries with net neutrality, ISPs aren't allowed to charge subscribers more money to access certain websites or services, for instance, or slow down internet speed for users attempting to access certain content.

The main reason so many folks care about net neutrality is that without it, ISPs are allowed to restrict internet users' access certain services by making them more expensive or, alternatively, making them slower. For instance, an ISP can charge subscribers an additional fee if they want to access Netflix — or make Netflix movies stream at lower speeds in an attempt to compel users to sign up for a different video service.

Net neutrality was codified into law by the FCC in 2005 when a small ISP and phone service in North Carolina attempted to block the use of Vonage, a service that allowed users to make phone calls over the internet, on its DSL networks. The FCC ordered the phone company to stop blocking Vonage, which it did.

This is the kind of thing that led to net neutrality: Isolated attempts by individual ISPs to restrict their subscribers' access to internet content. That North Carolina phone company wasn't the only one, however. In 2002, AT&T's user agreement for its DSL service had a long list of "prohibited programs" that subscribers to AT&T's internet service couldn't use, which included "file sharing, game, newsgroup, proxy, IRC servers, multi-user interactive forums and Wi-Fi devices."